What causes the “ripples” that extend east-west along the mid-atlantic ridge?

Below are two cropped screenshots from the super-cool video Draining Earth's oceans, revealing the two-thirds of Earth's surface we don't get to see with the oceans "drained" to 4000 and 5000 meters below sea level.

We've all read about the magnetic field reversals leaving alternating lines of residual magnetic field trapped in the crust that go in the north-south direction, but I was surprised to see these topographic ripples that extend in the east-west direction.

What caused these to form?

I've added some annotation to indicate the direction of the ripples I think I'm seeing. 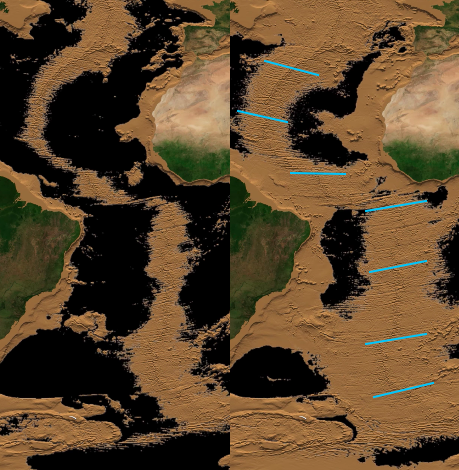 These are transform faults that result from differential spreading rates of the middle ocean ridge. As such they are part of the plate boundary. Possible causes are different production rates of magma, thermal differences of the sea floor, differences of relative plate movement.

And: Wilson, 1965: A New Class of Faults and their Bearing on Continental Drift

But transform faults can also reach all the way to the next subduction zone (e.g. Azores-Gibraltar fault zone) and be responsible for devastating earthquakes.

Not the answer you're looking for? Browse other questions tagged topography ocean-ridge or ask your own question.

9
What are the causes of lower UV radiation at lower elevations?
12
What are the non-anthropogenic causes of The Netherlands' low elevation?
11
Is the Mid-Atlantic Ridge a ridge or a trench?
1
Why are the south, the west and the north of the Caspian sea lush but its east completely dry?