How Old Are the Verkhoyansk Mountains in Northeastern Russia? 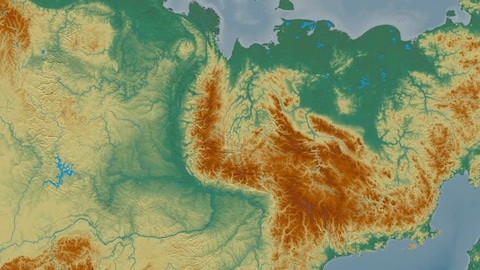 The multi-brown "hand" at the middle of this image is the Verkhoyansk Mountain Range in northeastern Russia. The best information I got regarding its age is simply "Cretaceous". But when in the Cretaceous? Because that is a pretty extensive chapter in Earth's geological history, spanning from 145 to 66 million years ago.

Depends on what exactly you are looking for.

The mountains contain material which is much older, some as old as the Permian. This material is hosted in detrital sandstones, so obviously that area was not a mountain back then.

The deformation of that area, is indeed Cretaceous:

The early stage of deformations dated as 160 Ma, the main stage dated as from 70 to 90 Ma.

So to answer your question, the mountains formed throughout the entire Cretaceous duration, but mostly in later (younger) times.

Not the answer you're looking for? Browse other questions tagged mountains age or ask your own question.

5
How are small mountains created?
3
Which mountains are rising?
6
Why are parts of the Atlas Mountains in Morocco flat?
8
How old is Earth's groundwater?
4
How are 'road-like passages' between Himalayan mountains formed?
4
Are the Olympic Mountains (in Washington state) geologically unique?
2
How do fold mountains form?
5
Could the speed in which the plate is moving affect how quickly mountains rise?