How much energy does Earth surface radiate at night per square meter?

I am finding lots of information about Earth's energy budget, about how objects emit infrared radiation based on heat, and lots of related things, but nothing helping me figure out how much energy is actually being emitted by the ground at night.

At night, the ground will still be emitting electromagnetic energy. The amount of energy being emitted will vary based on many factors. Information that helps with many different types of land in various conditions would be great, but for my case I'm focusing on a stereotypical grassy plain in an area which has been between 5C-40C (40F-100F) for the past weeks.

Ultimately I'd like to have a rough ballpark figure of watts per square meter.

The amount of energy emitted by night depends on how much it receives during the day, water content, length and type of grass and other vegetation, how many "past weeks" have there been, and what was the temperature of the ground when the relevant period began.

During a sunny day the ground is said to receive approximately 1 kilowatt per square meter.

Assume grass of 10cm-50cm (about a half foot to a couple feet). There have been thousands of past weeks. Since we need to get picky let's say the temperature has been a constant 10C (50F) every hour of every night and 15C (60F) every hour of every day for the last thousand years except for the 1 or 2 hours day/night transition where the temperature adjusts linearly back and forth if that makes the exercise easier. And the average annual rainfall of this location is 100cm (40in), rain was coming regularly at that rate until 4 days ago. In the last 4 days, it has rained once, yesterday afternoon dropping about 1cm (half-inch), and the water table is generally about 5 feet under ground level.

The dirt is completely covered and appears as you would expect if you Googled an image of a grassy meadow. For example, the picture I've added at the bottom of the question.

In my opinion, however, the best answer would not just say "The ground emits 10 watts per square meter under those exact conditions!" (even that would be useful though) but would instead say "The type of grass actually makes a significant difference that can throw off even a ballpark estimate, as the difference between grass type A and grass type B produces a whopping half-order-of-magnitude difference in final results due to the way their outer material insulates them! And the difference between wet grass and dry grass is actually 2 orders of magnitude! If I were to simply pick a random, reasonable scenario of ABC it would be within the order of magnitude of 0.1 to 1 watts per square meter, and that's on the high end."

For anything else that matters feel free to simply pick a reasonable value and mention (even if only in a few words) why it matters and if your pick produces a high, low, or mid-range estimate.

I'm not sure how accurate you need, but beginning NASA's global 398.2 watts per square meter estimate from their energy budget a rounding down based on temperature variation should give a pretty good estimate. A lot of people have a problem with that number because it's more energy than we get from the sun, but that's because our atmosphere is a kind of blanket that traps heat, which warms the Earth above it's planetary eqilibrium temperature.

It's also (but less so), higher because Earth is warmed from below as well as above. 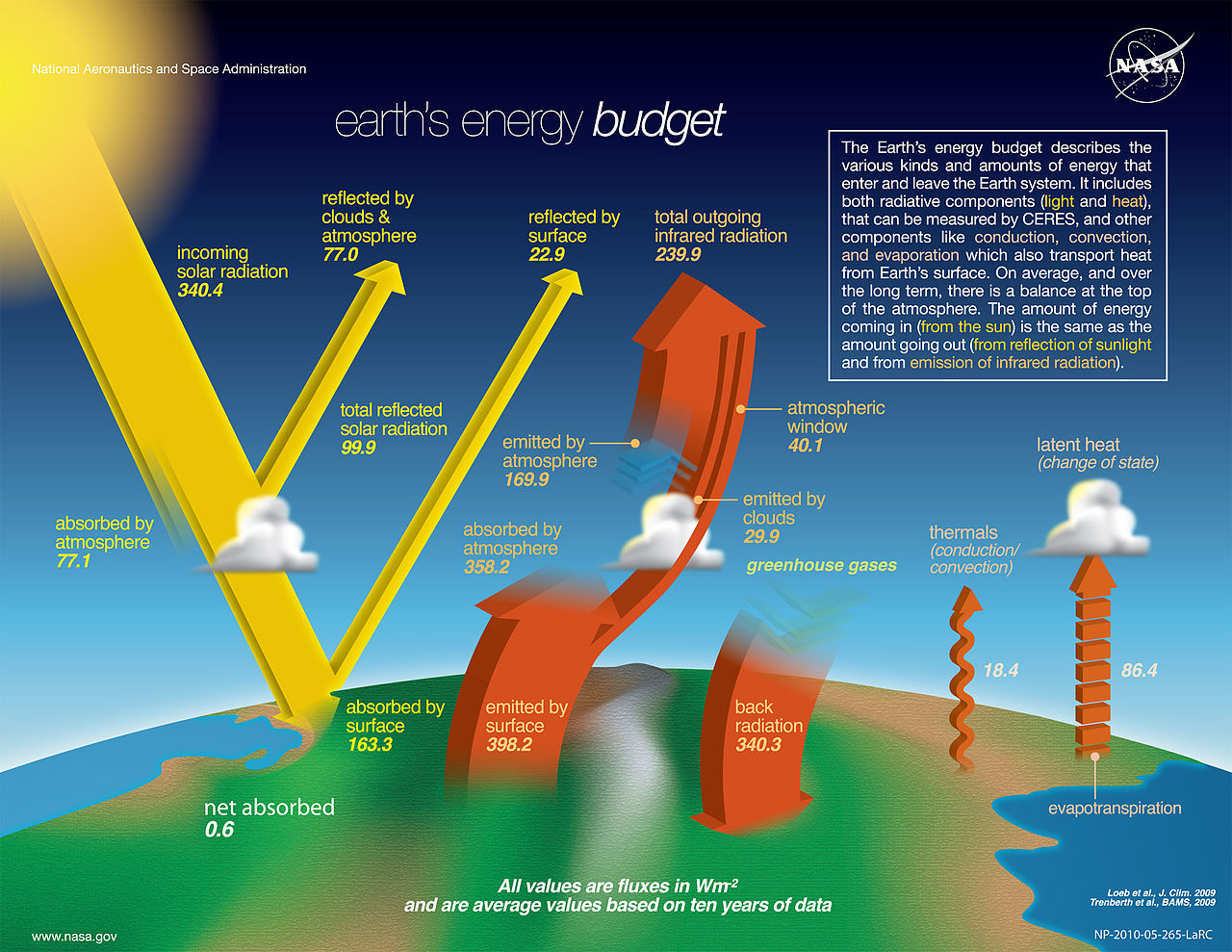 Not the answer you're looking for? Browse other questions tagged energy-balance or ask your own question.