Does gravity increase the closer to the core you get?

Or does the mantle and crust above you counteract the increase at one point and it actually decreases?

The below figure, taken from Wikipedia shows a model of the free fall acceleration, i.e., 'gravity'. The left-most point corresponds to the center of the Earth; then further right at $6.3\cdot1000$ km you are at the Earth's surface; and then further out you move into space. You can follow the blue line for PREM to get an idea of the average (expected) gravity. As you see, the gravity actually increases slightly within the Earth (reaching a maximum at the core-mantle boundary), but tapers down within the core.

To make this kind of calculations, you must think of the Earth like an onion: made up of many concentric spheres. Whenever you move a bit deeper into the Earth, you strip off all the layers you've crossed. As you get closer to the center of the Earth, there are fewer and fewer layers, and eventually, there's nothing left at the center! The reason why gravity goes up ever so slightly within the Earth is that you get close to the much denser core material. If the density of the Earth were constant (per the green 'constant density' line), the gravity would just decrease linearly. 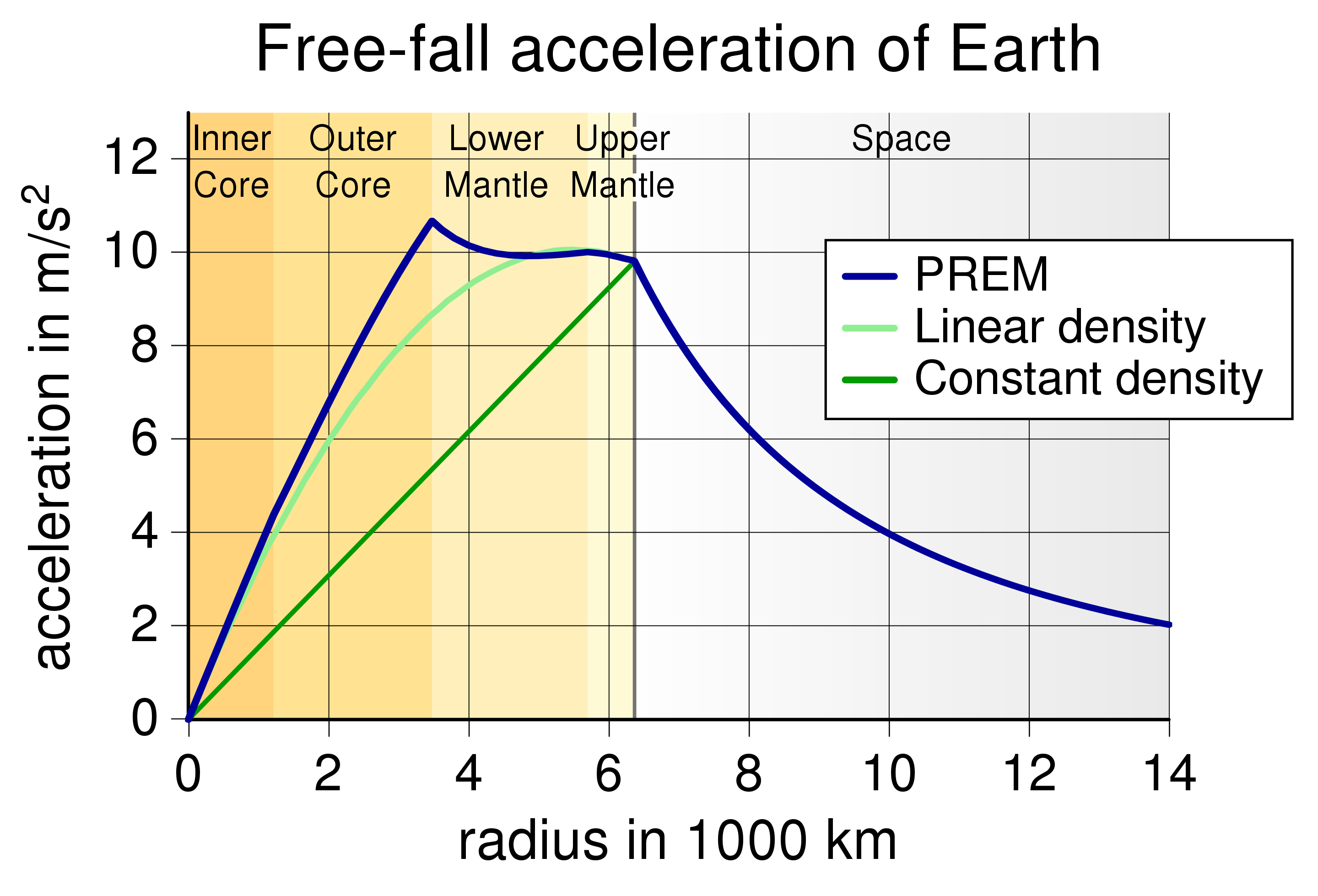 See the other answer and the discussion below for some more details on the math and procedures required to make these calculations.

This is a companion to the other answer. The other answer gives values for what the acceleration actually is based on knowledge about the composition of the planet. In this answer I want to introduce some of the mathematical tools that allow you to reason about how gravity varies in and around planets. David Hammen's answer, which I think he wrote overlapping with the second part of this one, also has versions of some of the maths in the second part of this one, and is very worth reading.

An idealised (and incorrect) Earth

First of all consider an idealised Earth: in this model Earth let's assume that the planet is:

For this simplified model we can use a famous result, proved by Newton, known as the shell theorem. This says two things:

From this it immediately follows that, at any point inside our model Earth, you can ignore all the mass outside that point and then just consider the gravitational influence of the mass inside the point, and we can also consider that mass to be concentrated at the centre of the model Earth.

Which shows you that $g$ reduces linearly as you approach the centre of the Earth in this model.

A nice thing is that you can use most of the above even if $\rho$ is not constant: so long as $\rho = \rho(r)$, only, then you can still use the shell theorem to compute $g(r)$, but you now have to do some integral over $r$ to compute $m(r)$. So you can relax the third requirement above, at the cost of a little more work. I believe that, in practice, $\rho$ does depend only on $r$ to a fairly good approximation, so this model will let us compute how gravity actually does vary.

Where the integral is the mass of the planet to radius $R$. It's clear from this that $g$ is constant if $\rho(r) = \rho_0/r$: a planet with a density which goes down as $1/r$ has gravitational acceleration which is constant throughout its volume. Note that this planet has infinite density at its centre: since that's never true for planets – we're not dealing with black holes here, and if we were we could not use Newtonian gravitation – this means that for all real planets, $g \to 0$ as $r \to 0$.

More generally we can differentiate the above to get an expression for $dg/dR$:

This is a companion answer to both Erik's and tfb's answers.

tfb's answer assumes a uniform density throughout the Earth. This is highly inaccurate. Not to disparage tfb's answer; I've run across physics PhDs who thought that this was the correct model of gravitation inside the Earth.

The problem with this model is that the uniform density model is invalid for any object large enough to pull itself into a more or less spherical shape. In the case of our Earth, the mantle is significantly denser than is the crust, and the mantle's density increases with increasing depth due to increasing pressure. The core is much denser than is the mantle, by over a factor of two. The core's density increases with depth, and then jumps even a bit higher at the outer core / inner core boundary.

Not the answer you're looking for? Browse other questions tagged geology geophysics earth-observation gravity or ask your own question.

14
What is the pressure at the center of the Earth?

12
How do mantle plumes travel from the core of Earth to the crust?
15
When a tectonic plate subducts, does any of the subducted material melt, or is it just the mantle above the subducted slab that melts?
17
At what point does plate tectonics stop?
7
Why does part of the P-wave convert into a S-wave with an increase of incidence angle?
10
Why is the elevation of the Iberian Peninsula so high?
9
How fast does the Earth's inner-core spin?
5
Do we know what the rigid mantle looks like?
1
Does the Earth produces measurable gravity waves?