What Caused The Sea Levels to Drop During the Maastrichtian Epoch?

Anyone who has studied ice ages would know that during the last two-and-a-half million years of Earth's history, there have been periods where there was enough ice to suck up a lot of water. As a result, sea levels fell by an average of 100 meters. Among the most famous examples of this sort of drop is Beringia, the landmass that connected North America to Asia.

However, that doesn't seem to be the only way to reduce sea levels. On the image below is how much North America changed in only less than ten million years. 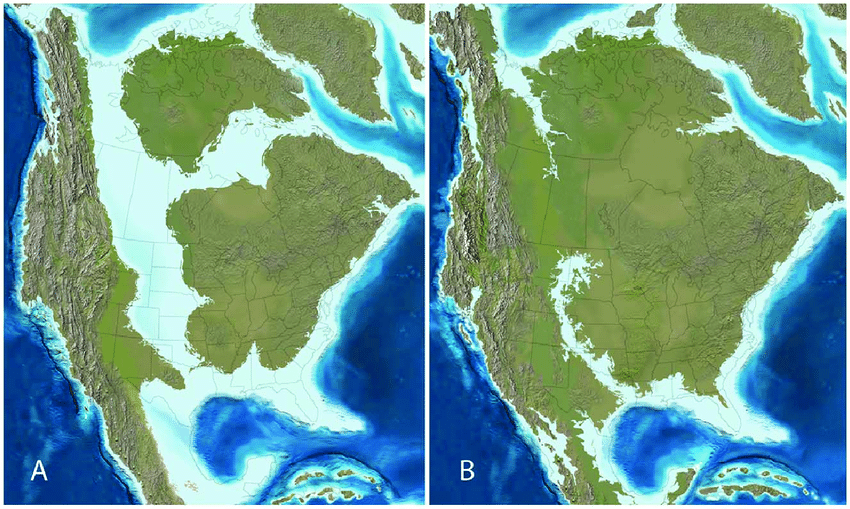 On the left is what North America looked like 75 million years ago. On the right is North America at the time the dinosaur empire fell nine million years later. It's not just North America that experienced this drop. As a matter of fact, the whole world was undergoing the same process (it's just that I couldn't find one compatible enough to post in this SE.)

The big deal with that is that unlike in the Ordovician, Carboniferous, Permian or Quaternary periods, this marine regression was not because of ice, as its extent (therefore its influence) was barely minimal--alpine at the very best. There was no massive pileup of polar ice as was the case in the other periods listed last sentence.

So if ice weren't the cause of the sea levels dropping during the latest Cretaceous age, then what else could cause the same thing to happen?

Tectonic activity can change the volume of oceanic basins and hence, modify the sea level, ice not involved.

At Cretaceous the tectonic activity was high. The flux of material from mantle to ocean ridges and plateaux reduced the volume of ocean basins, wich produced a global high sea-level observed in differents parts of the globe.

During Campanian and Mastrichtian global transgressions are recognized in several stratigraphic sections of the Earth.

Z. Dubicka and D. Peryt (2012) studied a stratigraphic sequence in Poland wich also showed transgression phases on Mastrichtian. They correlated them with other strata of the age.

This sea-level rise, recorded in south-eastern Poland, can be correlated with the transgressive peak recognized by Hancock (1993); this corresponds to the Craise Graise (¼ Vijlen Member) exposed in the CPL quarry at Halembaye in Belgium, which in turn corresponds to the lower Belemnitella junior Zone, i.e., earliest Late Maastrichtian. Hancock (1993) suggested that this peak may occur globally. He correlated it with the Prairie Bluff Chalk on the northern margin of the Gulf of Mexico and with strata that lie a little above the base of the Tinton Greensand on the Atlantic coastal plain. The transgressive peak in the earliest Late Maastrichtian was also documented in the Sopelana section in the Basque Arc Domain in Spain (Gómez-Alday et al., 2004), which coincides with the inoceramid extinction, the informal definition of the Lower/Upper Maastrichtian boundary. Moreover, a marked transgression in the middle Maastrichtian was reported from the Southern Hemisphere by Huber and Watkins (1992) who noted a higher diversity of keeled foraminifera, which they interpreted as reflecting a possible transgression.

Then let's focus in your question about the sea level drop. It is pretty obvious a regression happened, at least at North America.

The sea level drop appears to be global too, according to Matsumoto (2002) and associated to a slowing down of global tectonic activity.

Tectono-eustasy may have been the main cause of the phenomena of transgression-regression, but certain kinds of other tectonic movements which affected even the so-called stable platforms were also responsible for the phenomena. The combined effects of various causes may have been unusual in the Cretaceous, since it was a period of global tectonic activity. The slowing down of this activity followed by readjustments may have been the cause of the global regression at the end of the Cretaceous.

Not the answer you're looking for? Browse other questions tagged earth-history sea-level paleogeography cretaceous or ask your own question.

18
Why deep ocean didn't freeze during snowball Earth?
14
What is a reasonable forecast of sea level in 2100?
2
Modelling sea levels with gravitational parameters
8
How were the sea levels around western Europe during the Medieval Warm Period?
3
Beringia - history of the region, periods of sea level fall/rise - paleogeography of Pleistocene
2
Was the Earth's sea-level significantly lower in ancient times?
5
estimation of prehistoric sea levels
2
How Good is The Evidence For Snowball Earth?
8
Was the Caribbean Sea a closed sea during the last glaciation?