Could the speed in which the plate is moving affect how quickly mountains rise?

In an episode of History Channel's How the Earth Was Made, there was a remark when India left the rest of Gondwana 80 million years ago only to collide with mainland Asia 50.5 million years ago. The remark was, "very fast in geological time." Afterwards, it was said that "as with any smash, the faster the collision, the bigger the wreck." In the episode, those remarks were written as an explanation for the Himalayas' "unique size".

But is this true? Could the speed in which one plate collides with another REALLY affect the size of a mountain range?

The height of the Himalayas

Like Keith McClary says in his answer, there really are two factors in creating growing/shrinking mountains.

You can see that the mountains could be as much as 20 km high! You can appreciate just how much mountain has disappeared, for another very young mountain range! So, the reason that mountains aren't as big as they could/should have been, is that they are cut down by erosion. Rain, snow, wind, temperature, all break down mountainous rocks into smaller broken pieces. Those pieces are transported away from the mountains as sediment in rivers (such as the Yangtze for the Himalayas).

The size of the Tibetan Plateau 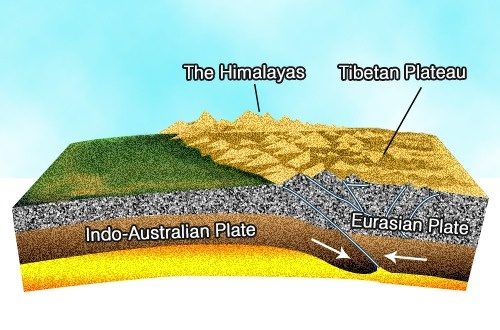 Now if your question was also about why the Tibetan Plateau is so wide (rather than the Himalayas so high), I recommend you read https://oak.ucc.nau.edu/wittke/Tibet/Plateau.html , a very well-written summary of the three main hypotheses:

This picture shows all those three hypotheses. 1=distributed shortening, 2=underthrusting, 3=lower crustal flow. In each case, a plateau is formed relatively far away from the actual collision between the two plates.

It is likely that, really, all three hypotheses together are at play. As explained on the website, at least the first two hypotheses are thought to be related to the speed of the collision.

So, yes, both the height and the width of the Himalayas are thought to be linked to the speed of the collision/relative plate movement!

1
What Happens When India Stops Hitting Asia
2
How do tightly packed plates move in the theory of plate tectonics?
8
How did the Ural mountains form?
6
How can linear oceanic ridges (like the East Pacific Rise) be explained by single point mantle plumes?
3
Do tectonic plates "float" over the mantle and "collide" like icebergs?
3
How Old Are the Verkhoyansk Mountains in Northeastern Russia?
7
How can we know the past height of mountains?
1
Does the collision of India influence the geology and geography of some of the other mountains of Asia, or just the Himalayas and Tibet?