Why are there waves in seas towards shore - even in night?

Waves are mostly caused by Friction of wind on surface of water.

Ocean waves (and also in mediterranean type seas and larger lakes, but on a smaller scale) are generated by two processes:

During the night, you are probably seeing swell waves. Of course, some wave energy is generated also in the opposite direction by the wind blowing offshore, but one can only "see" these waves further out in the sea if the wind is strong enough (see the definition of fetch).

Also check the Figure [1] below for clarification on how swell is generated (the longer period wave energy travels faster than the energy of the shorter period waves, so the initial "random" wave field disintegrates into regular swell). 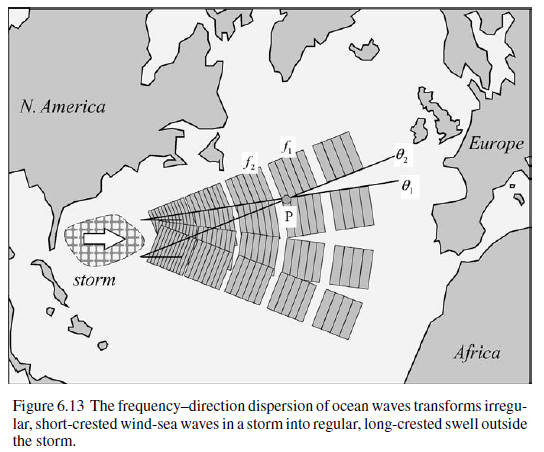 Shallow water wave processes like diffraction and refraction will curve the paths of the waves that start reaching the coast and "feeling the bottom". The waves appear to be heading almost perpendicular when they reach the coast, even if 1 km out to sea they're moving almost parallel to the long distance coast.

Waves are ubiquitous, except on land ;-). Waves in the open sea are a mix — a superposition — of waves in different directions.1 The dominating direction of large waves is, after a while, the wind direction; but that's not absolute. You have some omnidirectional background "noise" of chaotic movement as well as waves which have traveled a long distance and have nothing to do with local conditions.

What you see at the shore is the part of the waves on sea which run towards the shore. That's of course less when the wind is off-land, but it is not zero. In addition you have refraction on the coast line; the waves "bend around" the coast line.

In essence, that you see a dominating wave direction towards the land at any wind direction is a result of zero waves emanating from the land.

Not so much. This is common in the Mediterranean in summer, for example, where the area sits under a stable area of high pressure and there is little wind caused by the weather system. Go to the Med in winter though, and you'll find the weather systems are completely different as the weather systems which create the Meltemi kick in. If you go elsewhere in the world - Britain, for example - you'll find that the wind at the coast is generally dominated by changeable weather systems blowing across the country, and not by coastal winds. And it should be obvious that you can go somewhere without a coast - say, Kansas - and still experience winds, and see waves on the surface of lakes.

Other answers have already covered the mechanics of waves better - but I thought this additional misunderstanding in the question was worth clearing up.

I am not a wave expert, but i thought waves were caused by the gravitational pull of the moon and sun ? As the ocean is pulled up and down every night and the bulge from the pull being dragged across the ocean and then released sets the waves in motion and the reason they always go towards the shore is because the mass of the ocean and its shape. Once the waves comes in and then underneath it is cycled back out because the top wave has more mass and is the dominate one. The wind just adds to motion or partially cancels out the motion of the wave depending on its direction. I know this is a old thread but i thought it was very interesting. Here is some citation i found while replying and it seems both gravitational pull and wind both cause the wave direction

Not the answer you're looking for? Browse other questions tagged meteorology oceanography wind waves scale or ask your own question.

13
Intuitive definition of the Monin-Obukhov length?
11
Why does it rain more at night than during the day?
5
Why doesn't it snow even when it is below freezing?
16
Why (actually) is the night sky so bright in the city? How far up is that happening?
5
Depth of the wind-induced currents and the shoreline
12
Why is the diurnal temperature range on the Cascade volcanoes so small?
3
SWAN wave model: HSIG is strangely low
5
How much would weather data from ocean-going vessels improve climate research?