Have the oceans dissolved water vapour?

The oceans have dissolved gases as N2 or O2.

Henry's law establishes there is an equilibrium between the atmospheric concentration of a gas and its concentration in the ocean.

The atmosphere has H2O(g).

Is there H2O(g) dissolved in the oceans or Henry's law does not apply because the water is also H2O?

The answer is no, yes and then, perhaps, no.

No: water vapour is not "dissolved" in the oceans, rather it becomes part of the oceans through a phase change from vapour to liquid (possibly via an intermediary stage as ice). The process of "dissolving" refers to a substance entering a "solution", which is defined as stable mixture of two or more substances in which the state of the solution is determined, generally, by the solvent (the liquid water in this case). For example, see the wikipedia article on "solution". When water vapour enters the ocean, it is just adding to the volume of liquid water. Water vapour bubbles suspended in the ocean is another issue. When a gas is dissolved in a liquid, it ceases to be a gas. So we do not have "O2 gas" dissolved in the ocean, we have O2, which is a gas in the atmosphere, present in the ocean as a solute.

Henry's law describes the behaviour of solutes in a pure solvent. I will quote parts of the WikiPedia article you cited to bring out some relevant points.

Henry's law is a gas law that states that the amount of dissolved gas in a liquid is proportional to its partial pressure above the liquid.

One point neglected in the article is that it is assumed that the gas phase is an ideal mixture of different gases - that is that they follow the ideal gas law. This is a very good approximation for the earth's atmosphere. For ideal gases, the concentration in solution then is related to the concentration in air by the Henry's law constant. The value of the constant depends on how the equation is written and the concentration units used.

Henry's law has been shown to apply to a wide range of solutes in the limit of infinite dilution (x → 0), including non-volatile substances such as sucrose. In these cases, it is necessary to state the law in terms of chemical potentials. For a solute in an ideal dilute solution, the chemical potential depends only on the concentration. For non-ideal solutions, the activity coefficients of the components must be taken into account

Henry's law becomes exact at very low concentrations of the solute. At higher concentrations, there is deviation from ideality due to interactions between the dissolved species. This means Henry's law is only used for low-concentration solutes. At the other end, Raoult's law applies. So for H2O in the oceans the water is nearly pure so it behaves as an ideal liquid. In thermodynamic terms the ratio between the water partial pressure at equilibrium in air above the solution (the ocean) and the water partial pressure above pure water times the mole fraction of water in the ocean (the mole fraction is the number of moles of water divided by the total number of moles of the solution - so close to 1 because the ocean is mostly water).

If there was absolutely complete ideal mixing between two solutes, say ethanol and water, then Raoult's law would be followed for all mixtures between the two. This is the same as saying the Henry's law constant would be 1 if the concentrations are given in mole fractions. That is not usually the case and the slope of the linear Henry's law region is different. Here is a figure for ethanol water from a more rigorous answer to a question in chemistry stack exchange. 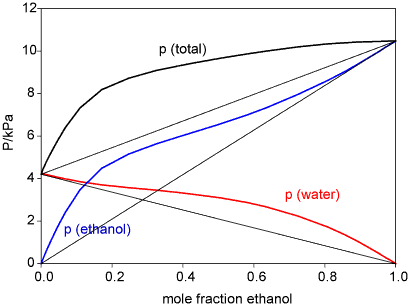 I'm not a chemist, but I'm prepared to take a punt at the answer:

No, there is no water dissolved in the oceans. The water is the oceans.

The answer to your question is yes and no.

And it looks like hydrogenated water is a thing https://en.wikipedia.org/wiki/Hydrogen_water

14
Does the heating of the oceans due to greenhouse effect negate the acidification due to increased CO2 levels?
15
How is carbon distributed among the atmosphere, the oceans, the biomass and the unburnt fossil fuels?
10
What keeps the different gases mixed in the atmosphere?
9
ppmV versus μmol/mol for atmospheric CO2 - how to convert?
2
Which parts of the ocean have been explored?
14
Would oceans regenerate if removed?
5
Relationship Between Ratio of Atmospheric Gases and Ocean Gases
9
Why are atmospheric BrO and ClO important to measure by satellite?
4
Atmospheric $\ce{CO2}$ fell at a Pleistocene interglacial-glacial transition. Ocean absorption vs biosphere absorption