Why isn't Iberia a tectonic plate?

I usually read that Iberia is a subplate, while India is a plate.

But it was a plate at the beginning of the Alpine Orogeny: 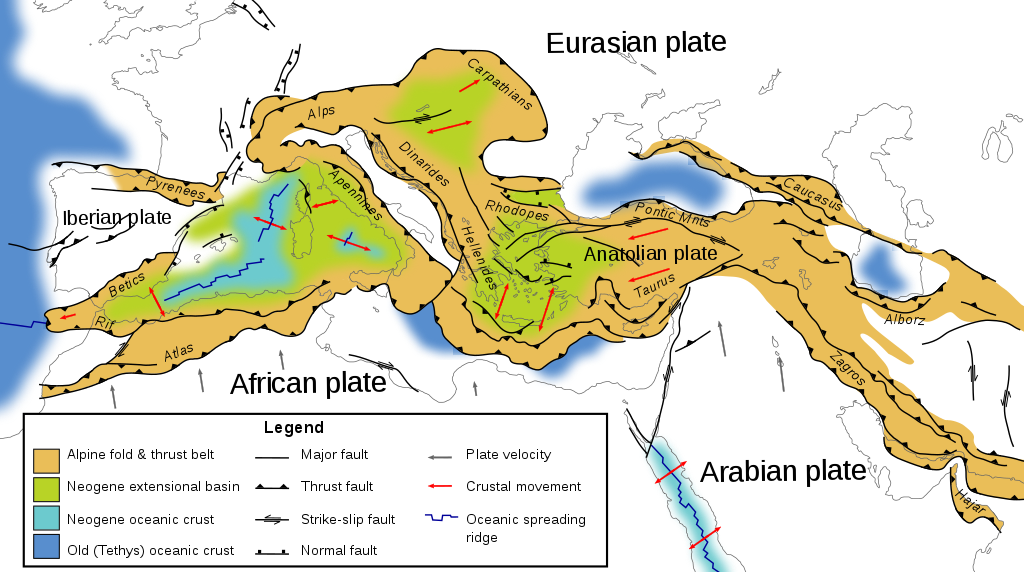 Both were plates that collided with the Eurasian Plate, forming respectively Himalaya and Pyrenees chains.

What makes Iberia a subplate and not a plate like that of India?

Active Oldest Votes
1
$\begingroup$
Want to improve this post? Add citations from reputable sources by editing the post. Posts with unsourced content may be edited or deleted.

The Iberian plate may have been a sub-plate once-upon-a-time, but in modern maps it is usually shown as part of the Eurasian plate, and the next plate to it is the African plate. The same thing applies to the so-called Indian plate. Prior to 43 million years ago it was indeed a separate plate, but then it fused with the Australian plate and there is no longer a plate boundary between India and Australia. The resulting plate is therefore usually referred to as the Indo-Australian plate.

A lot can happen in tens of millions of years, and one of the things that can happen is a change in plate boundaries. There is no longer a plate boundary between what was the Iberian plate and the Eurasian plate. If you are referring to events which happened tens of millions of years ago, it might make sense to refer to them a separate plates, which is why the article you quote refers to an Iberian sub-plate.

I think because it shares a long geological history with the European plate, and the history of movement has been more or less rotational in-situ, and not as an independent plate with a distinct geological history. Take as an analogy the Anatolian plate, which is often considered a part of the Eurasian plate, "In some references, the Anatolian Plate is referred to as a "block" of continental crust still coupled to the Eurasian Plate. But studies of the North Anatolian Fault indicate that Anatolia is de-coupled from the Eurasian Plate." Which would suggest the physical difference would rely on being decoupled from the parent plate. However it strikes me also that this can be a linguistic matter for ease of communication, it may just be a matter of convenience or description of Earth history, much in the same way you might talk about the Avalonia plate, or Baltica plate.

So I think Iberia is a sub-plate or block, because of the shared Geological history with the Eurasian plate, rather then the independent history (Gondwana and India separately) seen within the geological history of the Indian plate.

10
What tectonic structures exist on the Eurasian - North American plate boundary in eastern Siberia?
26
Why was the initial theory of plate tectonics so controversial?
9
Earthquakes at plate boundaries
1
Speed of tectonic plate movement
2
Movements of the tectonic plates - collison between Indian Plate & Eurasian Plate
2
Could glacial melt alter plate tectonic movement?
9
Is it ever possible for an continental plate to subduct under an oceanic plate?
2
What is diffuse plate rifting?
9
Do Tectonic Plates Merge?
2
What role does the hydrosphere play in tectonic plate convection?