I read the IPCC reports, I know global warming is happening and is man-made.

But as any skeptic should do periodically, I went to a few climate deniers websites and stumbled upon this peer-reviewed scientific paper, published in "Journal of Atmospheric and Solar-Terrestrial Physics":

The paper is coming from Costas Varotsos, a Greek physicist known from his contribution to the global climate-dynamics research and remote sensing.

It's too technical for me to point what the mistakes could have been made in that paper.

The only counter-argument I found on the web is a comment about it on the skepticalscience website: https://skepticalscience.com/news.php?p=3&t=103&&n=292#131401 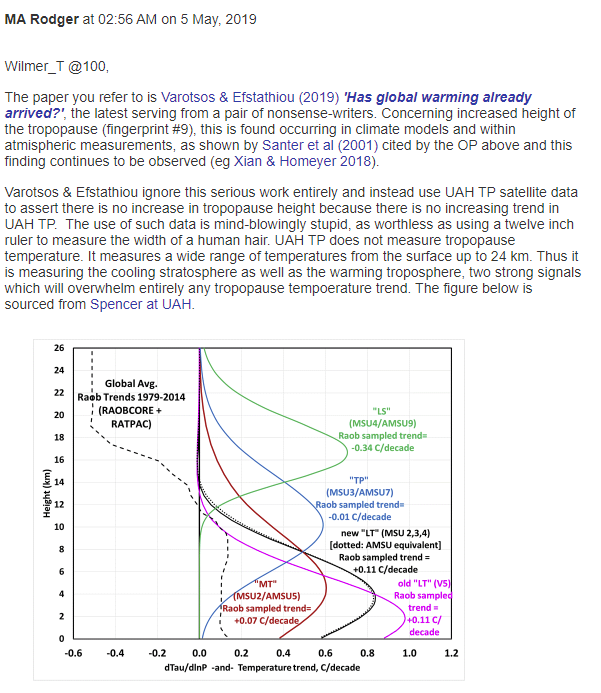 The comment is saying that the authors are making a fallacy as follows:

The comment is referring to the University of Alabama in Huntsville temperature dataset. This is derived from satellite microwave temperature sounders¹. From the Wikipedia article, this dataset provides:

UAH provide data on three broad levels of the atmosphere.

¹From personal experience, I can tell you that it is difficult to determine long-term temperature triends from satellite data. Polar-orbiting satellites in sun-synchronous orbits experience a drift over time, which means that their local time ascending node changes; in lay terms, this means that when they previously always passed at 14:00 over a certain spot, 2 years later this may be at 16:00. Even if that time wouldn't change, instruments degrade over time and get replaced by new instruments. You need to be very careful to make sure you're detecting a trend in the temperature and not in the instrument itself! I've worked on this in the FIDUCEO project, I was doing infrared temperature sounders and colleagues from Hamburg were doing microwave humidity sounders, but microwave temperature sounders were out of scope because none of us had the depth of expertise needed. Even with the expertise, we underestimated the difficulty of the problem and ran out of time before we could properly declare we had delivered what had been promised to the funding agency, although we learned a lot.