Why is Venus so cracked?

Wired.com's Space Photos of the Week: Perfectly Safe Celestial Coronas includes radar images of the surface of Venus taken from spacecraft in orbit around it. One of them shown below.

What causes this peculiar cracking? It reminds me of ice somehow. 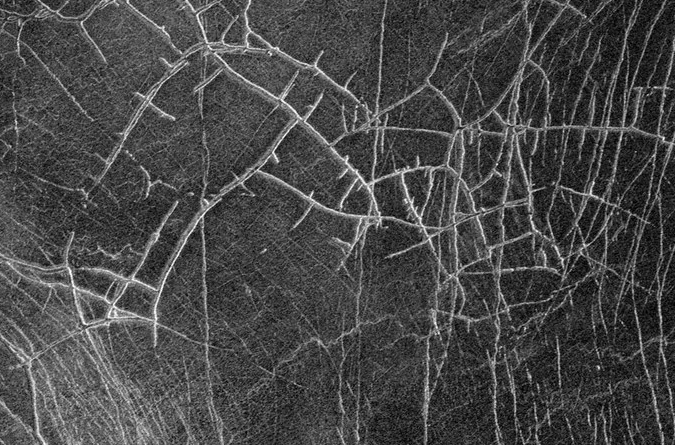 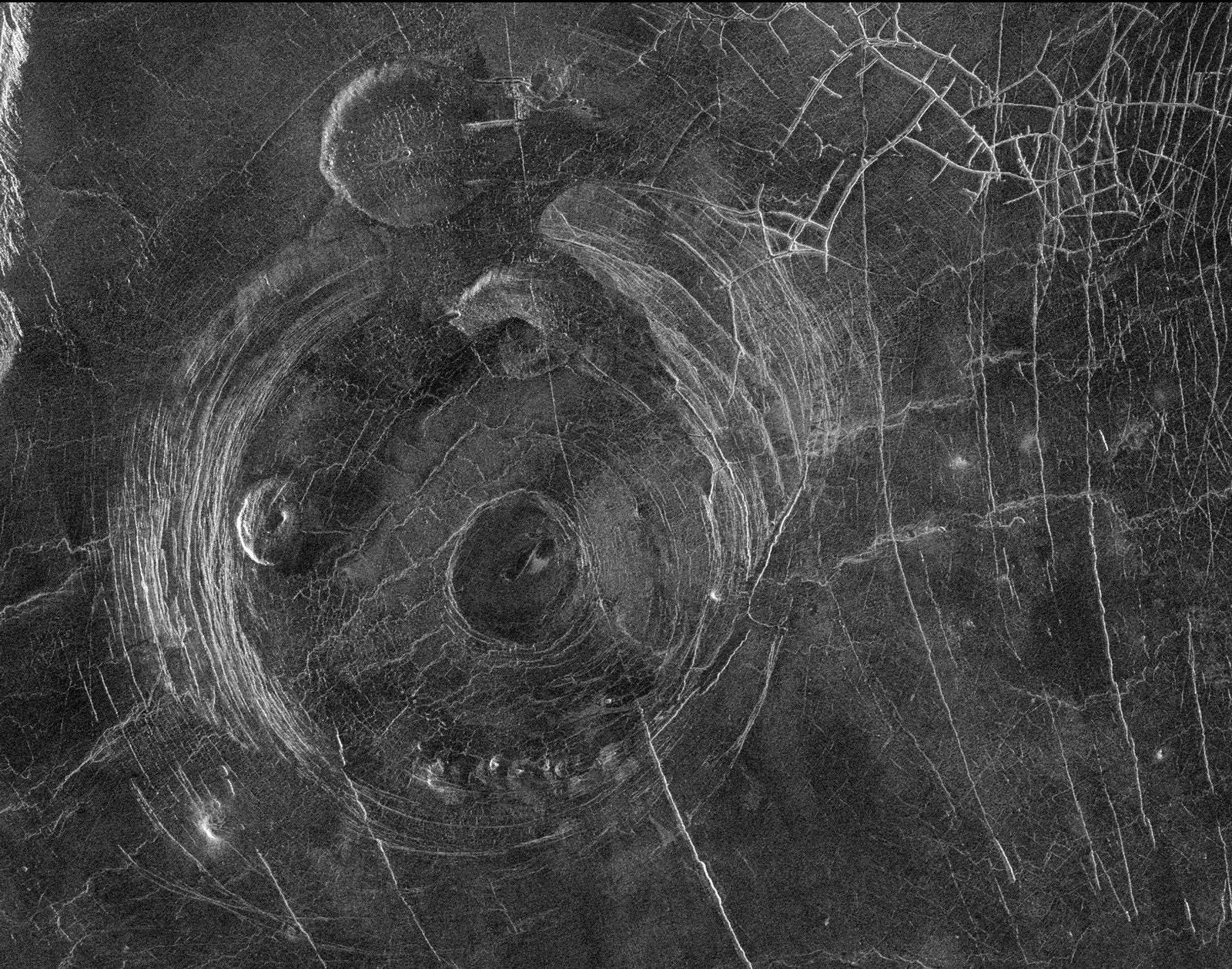 In 1991 NASA’s Magellan spacecraft captured the cracks and corona on the surface of Venus. You can see some younger impact craters, as well as cracks from plate tectonics; that main circular feature is a corona created by past volcanic activity.PHOTOGRAPH: NASA/JPL

I found the picture with a small write up on a JPL site.

It's a picture of the Aine Corona with pancake domes.

This Magellan radar image shows a region approximately 300 kilometers (180 miles) across, centered on 59 degrees south latitude, 164 degrees east longitude and located in a vast plain to the south of Aphrodite Terra. The data for this image were obtained in January 1991.The large circular structure near the center of the image is a corona, approximately 200 kilometers in diameter and provisionally named Aine Corona. Just north of Aine Corona is one of the flat-topped volcanic constructs known as "pancake" domes for their shape and flap-jack appearance. This pancake dome is about 35 kilometer (21 miles) in diameter and is thought to have formed by the eruption of an extremely viscous lava. Another pancake dome is located inside the western part of the annulus of the corona fractures. Complex fracture patterns like the one in the upper right of the image are often observed in association with coronae and various volcanic features. They are thought to form because magma beneath the surface follows pre-existing fracture patterns. When eruptions or other movements of the magma occur, the magma drains from the fractures and the overlying surface rock collapses. Other volcanic features associated with Aine Corona include a set of small domes, each less than 10 kilometers (6 miles) across, located along the southern portion of the annulus of fractures, and a smooth, flat region in the center of the corona, probably a relatively young lava flow. The range of volcanic features associated with coronae suggests that volcanism plays a significant role in the formation of coronae.

Apparently, pan cake domes are on found on Venus.

Not the answer you're looking for? Browse other questions tagged planetary-science structural-geology planetary-formation radar venus or ask your own question.

22
Why do Earth and Venus have different atmospheres?
18
Can Venus be considered to be tectonically active?
10
Why are impact craters radially symmetric?
4
Why can't radar's decibel scale be used to determine the intensity of snowfall?
8
Carbon dioxide on Mars, Venus and Earth
2
Why is “at least a small tilt” between rotation and magnetic axis required by models of magnetic field formation?
2
Why should this be a thrust fault?
1
Will Venus eventually overheat? When it happens, what will happen to it exactly?
4
Why is the mass of atmosphere of Venus so much greater than that of the Earth?
1
Why does the Earth's crust have more aluminum than magnesium while the Sun has more magnesium than aluminum?