I was studying a satellite map of Iceland and came across an interesting, but unnamed feature located between Vatnajökull glacier and Trölladyngja volcano (between 64°50'35"N, 17°11'21"W and 64°48'33"N, 17°04'25"W ; link to google maps). It is a distinct, bright patch of land, around 6.5km across with an indentation in the center. Its color and texture are different than these of the lava field next to it and the indentation looks (to my untrained eye) more like a collapsed lava bubble than a caldera.

Is it a volcano or something else? 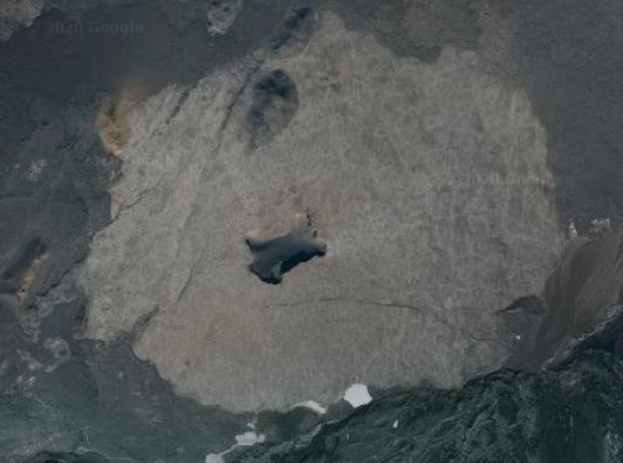 The place is called Urðarháls. I could not find much information about it in the scientific literature... It is mentioned in Sigmarsson & Halldórsson (2015): they say it's an interglacial basaltic shield volcano, possibly associated with the Askja volcanic system. The fact that the volcano was eroded by glaciers probably explains the colour difference with the surrounding "fresh", postglacial lavas.

The crater looks like a pit crater to me: it probably collapsed when lava was drained somewhere else, leaving an empty chamber beneath it. Another good example of pit crater is the Dolomieu, on Piton de la Fournaise, which collapsed in 2007. Look at Staudacher et al. (2009): compare figure 3, before the collapse, and figure 11, after.

Note that the authors use the term "caldera", which is loosely defined... What Wikipedia calls a non-explosive caldera would be referred to as a pit crater by some. I guess the two terms kind of overlap.

According to this geological map of iceland it is the Urðarháls, an interglacial shield, i.e. a dolomite shield volcano that got scraped by glacial activity The hole in the middle is the pit crater. You can find some cool pictures of it if you google the name with the correct icelandic letters.

Not the answer you're looking for? Browse other questions tagged volcanology geomorphology identification-request or ask your own question.

2
Why exactly is the feature on Io called a volcano, and the feature on Enceladus called a geyser?
3
What kind of lava tube feature is Cleopatra's Grave?
5
What is this geomorphological form?