after the NMO application we have stretch for far offset , i read a lot of articles but i can't have a complete idea how this phenomena is really created ! any one have a rich explanation ?

My understanding is the following (NB: it could be wrong!).

So, the wavelet shape is constant in the vertical direction everywhere in figure '(a)', but is seriously stretched out in figure '(b)'.

From the page of the linked figure: "Note that stretching is confined mainly to large offsets and shallow times. For example, a waveform with a 30-Hz dominant frequency at 2000-m offset and t0 = 0.25 s shifts to nearly 10 Hz after NMO correction. Because of the stretched waveform at large offsets, stacking the NMO-corrected CMP gather will severely damage the shallow events. This problem can be circumvented by muting the stretched zones in the gather." 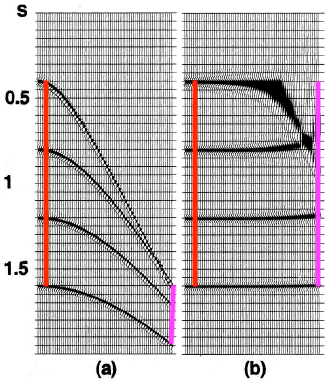 Not the answer you're looking for? Browse other questions tagged geophysics seismic data-analysis or ask your own question.

2
How can I merge weather data from different time zones?
6
Kalman - Data assimilation with external model
3
Detecting seismic waves using Software Defined Radio
5
What percentage of the earth's surface is covered by 2D or 3D reflection seismic data?
2
Velocity from time and depth seismic images
6
How does moveout correction work in seismic reflection profiling?
4
What is the relationship between raw seismic data, CMP Stacking, NMO & Machine Learning
1
Seismic dispersion: What does it really mean and what causes it?