Is there a name for the great circle where latitude and longitude are equal?

The curve where latitude and longitude are equal is not a great circle. But as joe khool writes in his excellent answer, it's called the curve of Viviani! It's easy to see that the curve is not a great circle, because, using naïve spherical coordinates (in radians) $(\phi,\lambda)$ with $\lambda$ being longitude and $\phi$ being latitude (zero at equator), this curve passes through $(0,0)$, and also through $(\pi/2,\pi/2)$ which is the north pole ($(\pi/2,\lambda)$ is the north pole for any $\lambda$), But it also passes through, say, $(1,1)$ which is not on the great circle the between previous two points.

In fact the curve you get looks like this: 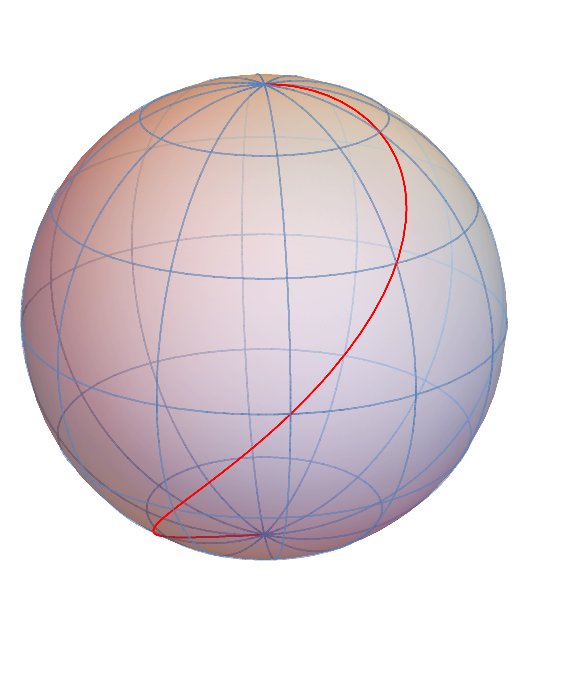 Note. I plotted this by defining Cartesian coordinates in the obvious way:

An earlier version of this answer plotted $(x,y,z)$ for $\phi = \lambda$ and $\lambda\in[-\pi,\pi]$. This means that $\phi$ takes values which are not in $[-\pi/2,\pi/2]$ of course. I had assumed that these points would end up around the back of the planet: that you'd get a kind of 'S' which wraps around the planet, but in fact it ends up around the front of it again: 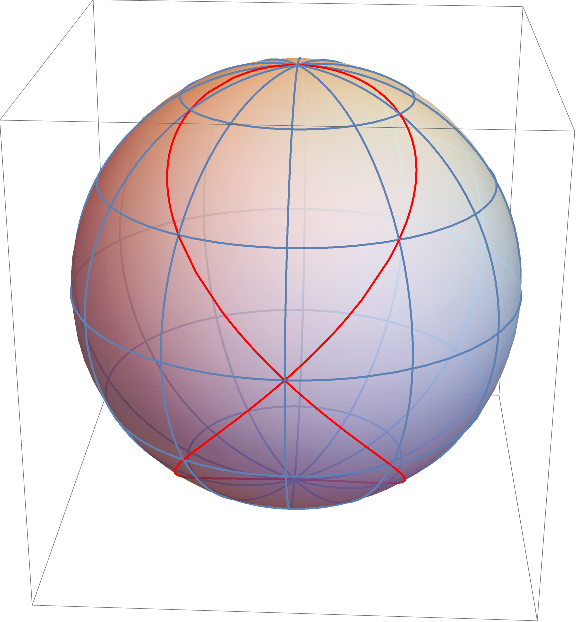 If the Earth was a sphere, then the curve in the last picture of tfb's answer is the curve of Viviani; otherwise, if you make the oblate spheroid assumption, you get a slightly distorted version of this curve.

More generally, a clélie is the name given to any spherical curve where the longitude $\varphi$ and colatitude $\theta$ have the relationship $\varphi=c\theta,\quad c>0$, and the curve of Viviani corresponds to the locus of a geosynchronous orbit, $c=1$.

Not the answer you're looking for? Browse other questions tagged geodesy or ask your own question.