How much does COVID-19 affect weather forecasts?

The World Meteorological Organization (WMO) is concerned about the impact of the COVID-19 pandemic on the quantity and quality of weather observations and forecasts, as well as atmospheric and climate monitoring.

Apparently, meteorological data sent by aircrafts play a big role in establishing weather forecasts. Due to SARS-CoV-2, fewer airplanes than usual are up in the sky, therefore less data is available.

The chart on that page shows a significant decrease in AMDAR data, however, is there any data available on how much this actually increases the prediction error of weather forecasts?

Given that the crisis is still ongoing, I doubt we know the full extent of the impact (forecasting the weather is hard enough, forecasting the impact of a pandemic is outside my expertise). But, at least one conference was supposed t o go to was cancelled. And I know the lack of airplane obs is impacting data assimilation. Beyond that, I am not sure. Some hypotheses perhaps include:

How this ordeal has affected weather forecasts may be a good cross-disciplinary study for the future.

To fully answer your question, you can look at Benjamin et al. (2006) to evaluate the relative impacts of different observational systems. Certainly there have been some changes since then, but this can give a cursory idea of what we might be looking at.

The World Meteorological Organization has several initiatives that track forecast performance. See for example here. The data is a bit delayed, as of today (Apr 5, 2020) the latest month available is February, which was before the strong decrease in AMDAR data.

For assessing forecast performance, one will need to find a forecast field for plotting and a certain metric. As forecast field I like to look at the 500 hPa geopotential height, since this is linked to the atmospheric flow, which itself largely determines surface weather. A suitable metric is the Anomaly Correlation Coefficient (ACC) which basically describes how well the predicted field correlates with the field as it was observed later on at the time for which the prediction was valid.

An intuitive way then to visualize these results, is to look at the forecast lead time at which the forecast reaches a certain threshold of ACC. In the example below this threshold is chosen to be 80%. So one could read the chart as 'how far the model was able to predict ahead', or in short 'predictability'. 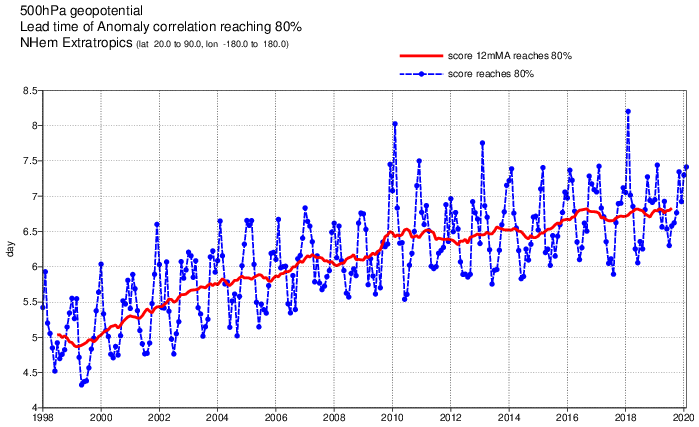 However, there have been several studies analyzing the relevance of different input data (including AMDAR) to the forecast models. I found for example this presentation. Although this is no conclusive answer to your question, I hope I provided some useful resources.

The ECMWF (European Centre for Medium-Range Weather Forecasts) has published an article about the topic on 24 March 2020:

By 23 March there was a reduction of 65% in [European aircraft] reports received compared to 3 March. Globally the reduction was about 42%. [...]

12-hour temperature forecasts in the northern hemisphere are more than 9% worse at cruise levels. [...]

"Removing half the aircraft reports would be expected to give slightly less than half the impact of removing all aircraft," says ECMWF scientist Bruce Ingleby. [...]

In summary, the number of aircraft observations has gone down significantly over the last couple of weeks both over Europe and globally. In the coming days and weeks, we expect a further decrease in numbers, which will have some impact on forecast quality in the short range, particularly around the polar jet stream level (10-12 km altitude).

Sensitivity studies at ECMWF have shown that removing all aircraft data degrades the short-range wind and temperature forecasts at those levels by up to 15%, with significant degradations at all forecast ranges up to seven days. There is a smaller, but still statistically significant, impact on near-surface fields, up to 3% on surface pressure.

Other types of observations are likely to be less affected by the COVID-19 disruption than aircraft reports, and there may be some additional radiosonde launches to try to mitigate the lack of aircraft data.

Not the answer you're looking for? Browse other questions tagged meteorology measurements statistics weatherdata or ask your own question.

17
Why are weather kites no longer used (much) operationally?
9
Why does air seem to affect local surface temperatures so much?
10
How does evapotranspiration affect rainfall?
11
How much distance does $0.001^\circ$ in latitude or longitude represent?
4
Do solar storms affect Earth's weather?
6
Are there any weather services that provide hourly forecasts beyond 7 days?
9
What are Atmospheric Rossby Waves and how do they affect the weather?