How do we know the speed of S-waves (shear waves) in the Earth's inner core? Has this been measured?

Wikipedia's Seismic wave includes the plot below of the speed of S and P waves as a function of depth in the Earth. In the region of the outer core the speed of S-waves or shear waves is shown to be zero but really they are evanescent and so the velocity is probably complex.

Then at the inner core boundary the speed of S-waves is shown again down to the center of the Earth, fairly flat near 4 km/sec.

Is the speed of shear waves in the Earth's inner core a measured quantity or is this just deduced? If it's measured, how do these shear waves get to the core if they can not propagate through the outer core? 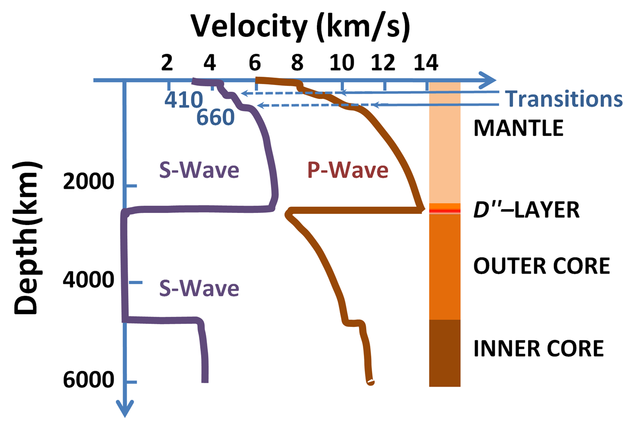 If waves would travel only through a medium while keeping their form (i.e., P-waves remain P-waves and S-waves remain S-waves), you would obtain something a bit like this video: https://www.youtube.com/watch?v=YctV5crEXyM .

However, standard models for wave propagation are more complicated than that. Upon hitting an interface, P-waves both reflect off and refract into the other material. And if this happens at a bit of an angle, it even generates a reflected and a refracted S-wave (if the material allows it!). Something like this image: 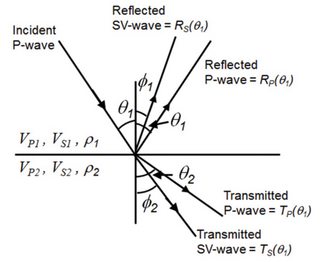 What you see is a P-wave that comes towards an interface between two different media (Vp=P-wave velocity, Vs=S-wave velocity, \rho=density). After hitting the interface, it creates 4 new waves! Two P-waves, two S-waves. A similar figure can be made for an S-wave hitting an interface.

So we can follow a hypothetical wave-path as follows:

You can see some of these effects in this nice video: https://www.youtube.com/watch?v=j7eoxizmC1I that I put in the comments also. It shows P-waves in green and S-waves in red. You can see how complicated the total wavefield becomes because every interface creates new waves...so it'll be a bit hard to see the particular wavefront I described above, but you can see the general picture. 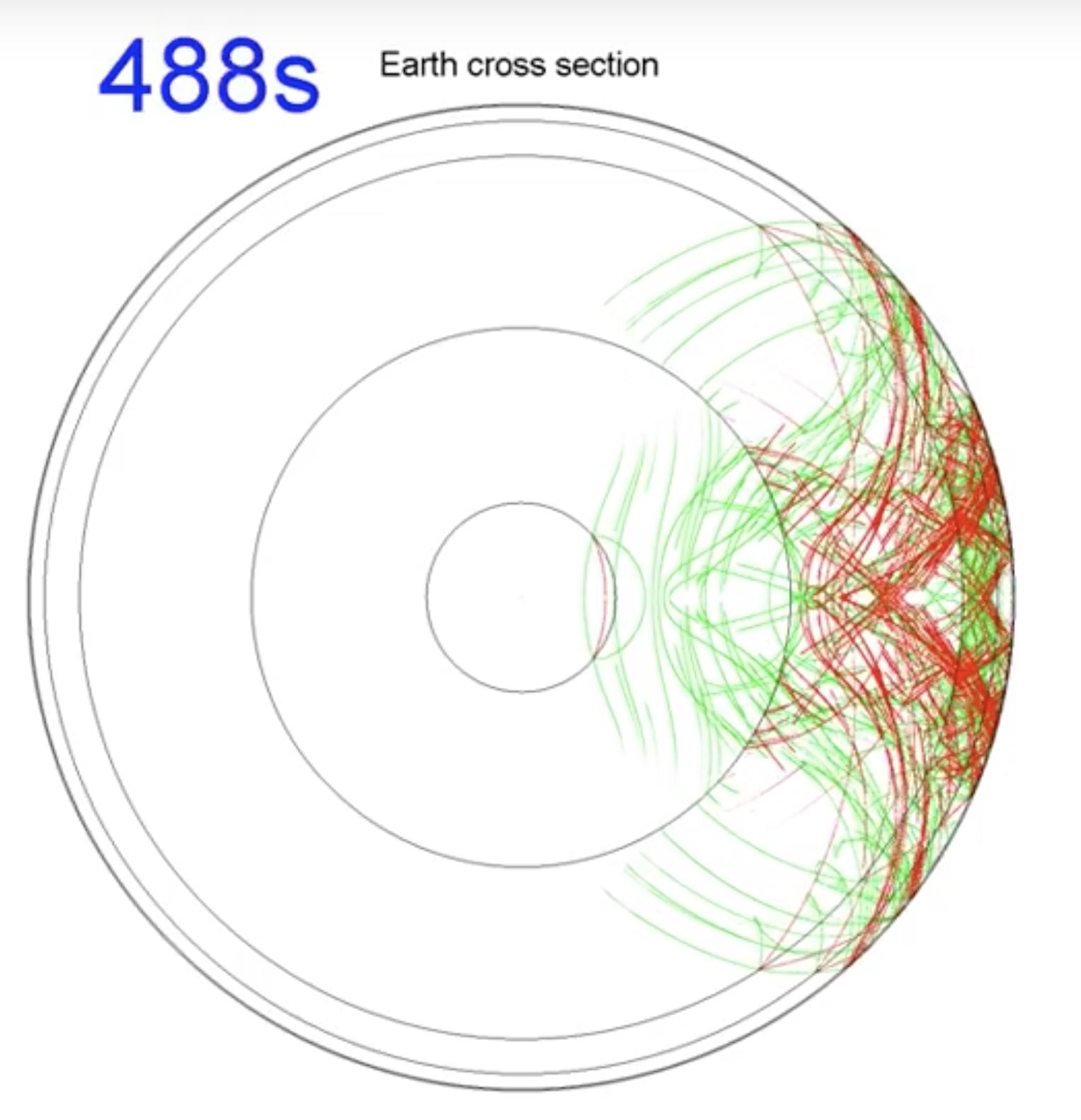 On this snapshot you see the P-wave (in green) generating an S-wave (in red) in the inner core.

So -- S-waves can exist in the inner core even when the outer core doesn't support them (because waves modes convert, as it's called, at interfaces), and their presence can be measured at the surface. I think that answers your question mostly.

Then, of course, there is still the question of how you'd measure the speed of the S-waves in the inner core, which is rather complicated. These days, it is done by assuming some seismic model of the earth (choosing V_p, V_s, and \rho everywhere within the Earth), and modeling seismic events such as on the linked YouTube video. Then you compare real recordings against your modeled data. If there are particular misfits, you create a new model and you iterate this procedure until your model fits the recorded data 'well'.

So is the shear-wave in the inner core a measured quantity or a deduced quantity? That requires a very careful definition of those terms, so I won't answer that question! Regardless, there exists a shear-wave velocity for the inner core that describes and explains recorded data very well.

Not the answer you're looking for? Browse other questions tagged seismology measurements seismic core or ask your own question.

3
Do we know anything about the nature of Earth's core that hasn't come from magnetic or seismic measurements?