What does supersaturation with respect to ice mean?

I've been reading about the Bergeron process, a process that generates much of the precipitation in the middle latitudes by generating ice crystals at the expense of water droplets. The part I don't understand is the supersaturation with respect to ice versus with respect to water.

I don't exactly understand what supersaturation relative to water and ice mean, even though they've attempted to explain it. My first thought is that maybe on the ice surface, the affinity for water vapor molecules is higher than in air, so water vapor molecules are more likely to be deposited on the surface, hence why the relative humidity with respect to the ice is higher. However, in my thinking, "with respect to" would mean which surface the water vapor is getting deposited on, when clearly the statement says the thing being deposited ("with respect to water"). Can someone explain this clearly for me?

The saturation vapour pressure defined by the American Meteorological Society:

The saturation vapor pressure of any pure substance, with respect to a specified parent phase, is an intrinsic property of that substance, and is a function of temperature alone. For water vapor, the saturation pressure over supercooled liquid differs appreciably from that over ice.

When water vapour exists over a body of supercooled liquid water, water is constantly exchanged between the liquid form and the water vapour form. When this reaches equilibrium, there is equal phase change in both directions. If the air becomes saturated, no more water vapour can be added to it, for it will condensate to the liquid form immediately. At this temperature, the vapour pressure is the saturation vapour pressure with respect to water. Remember that water can exist well below 0°C — clouds are typically not completely frozen until temperatures drop to around -40°C, although it depends on many factors and the details are subject to ongoing research.

When water vapour exists over a body of ice, there is a phase exchange. At a certain temperature and pressure, the air is saturated, any water added will precipitate as ice. At this temperature, the vapour pressure is the saturation vapour pressure with respect to ice.

By "Body of" you should probably not so much think of a frozen lake or liquid ocean but rather of small cloud droplets or ice particles.

This graph from Vermont State College shows the saturation vapour pressure over water or ice: 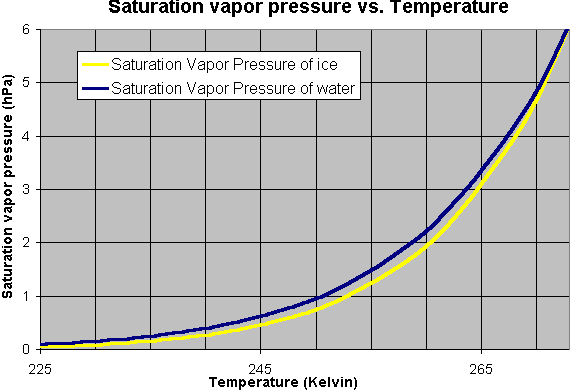 As your source stated, this difference is important for meteorology as it affects the formation of clouds and precipitation.

Now as to why the saturation vapour pressure is different with respect to water than with respect to ice is another question. You may find more expertise for that on Chemistry Stack Exchange than here on Earth Science. My atmospheric science textbooks in any case don't go into detail there.

I can identify two parts of how this may be confusing. The first is vapor pressure with respect to ice, and the second is supersaturation.

First, let's look over the equation for phase transitions. The saturation vapor pressure can be described by the Clausius Clapeyeron equation. Solving that equation explicitly (i.e. not using Bolton's formula used in the link), we find that $$e_s(T)=e_s(T_0)\exp(\frac{L}{R_v}[\frac{1}{T_0}-\frac{1}{T}])$$ 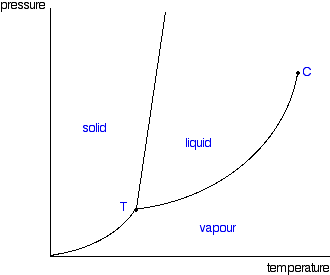 Where all three meet is the triple point, but is more commonly referred to as the freezing temperature of water. Notice that the below it is where the liquid does not exist. Instead the gas goes directly into solid (deposition). In reality, liquid water can exist below this temperature (supercooled water), but it will eventually turn into a gas or ice.

I made a graph (below), similar to the phase diagram above, but does not clip off the clausius clapeyeron curve. Notice that below 273 K, the saturation pressure of vapor w.r.t. (with respect to) ice is lower than water. This basically says that it will first turn into ice before it turns into water. Then, above 273 K, the vapor saturation curve wrt water is less than ice- meaning it is easier to turn into liquid water above 273 K than it is for ice. 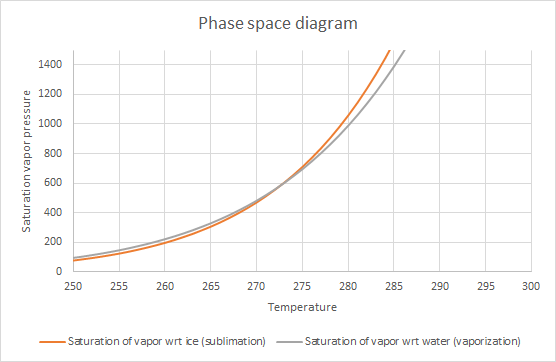 I should note, that the process of making a cloud can be a bit more convoluted than this answer. For that, I recommend looking at this answer where I discuss Kohler theory.

So the short answer is, there is sufficient water vapor in the air to form a cloud. But because it is below freezing, the cloud is formed via deposition, much like how frost is formed.

Not the answer you're looking for? Browse other questions tagged precipitation humidity water-vapour or ask your own question.

30
At what humidity does it start to rain?

10
What does the notation "kg kg-1" for units mean for specific humidity
10
Is there any experiment to prove that CO2 with the atmosphere concentration can have greenhouse effect?
3
How does humidity vary with height in the Earth's atmosphere?
2
Why does relative humidity seem to correlate with high temperature (at least where I live)?
2
Why a stratus cloud does not always reach all the way to the ground?
6
How does temperature impact the elevation distribution of orographic precipitation?
6
How is relative humidity determined from a wet and dry bulb readings?
3
Is there really precipitation on Mars? Does frost count?