So according to this,

Last month, the lower tropospheric temperature dropped 0.28 $\sf^\circ$C from February to March, which seems like a huge drop even if it's due to seasonal reasons.

Last month, the lower tropospheric temperature dropped 0.28°C from February to March, which seems like a huge drop even if it's due to seasonal reasons.

Seasonal temperature variations tend to be much stronger over land than over ocean. The other is that the Northern Hemisphere contains significantly more land than does the Southern Hemisphere. The combination of these two effects make worldwide temperatures exhibit a seasonal variation that reflects seasons in the Northern Hemisphere. February to March marks the transition from meteorological winter to meteorological spring (which starts on March 1 rather than March 22). One would expect March to be warmer than February, worldwide.

This is exactly what the GISTEMP records show: 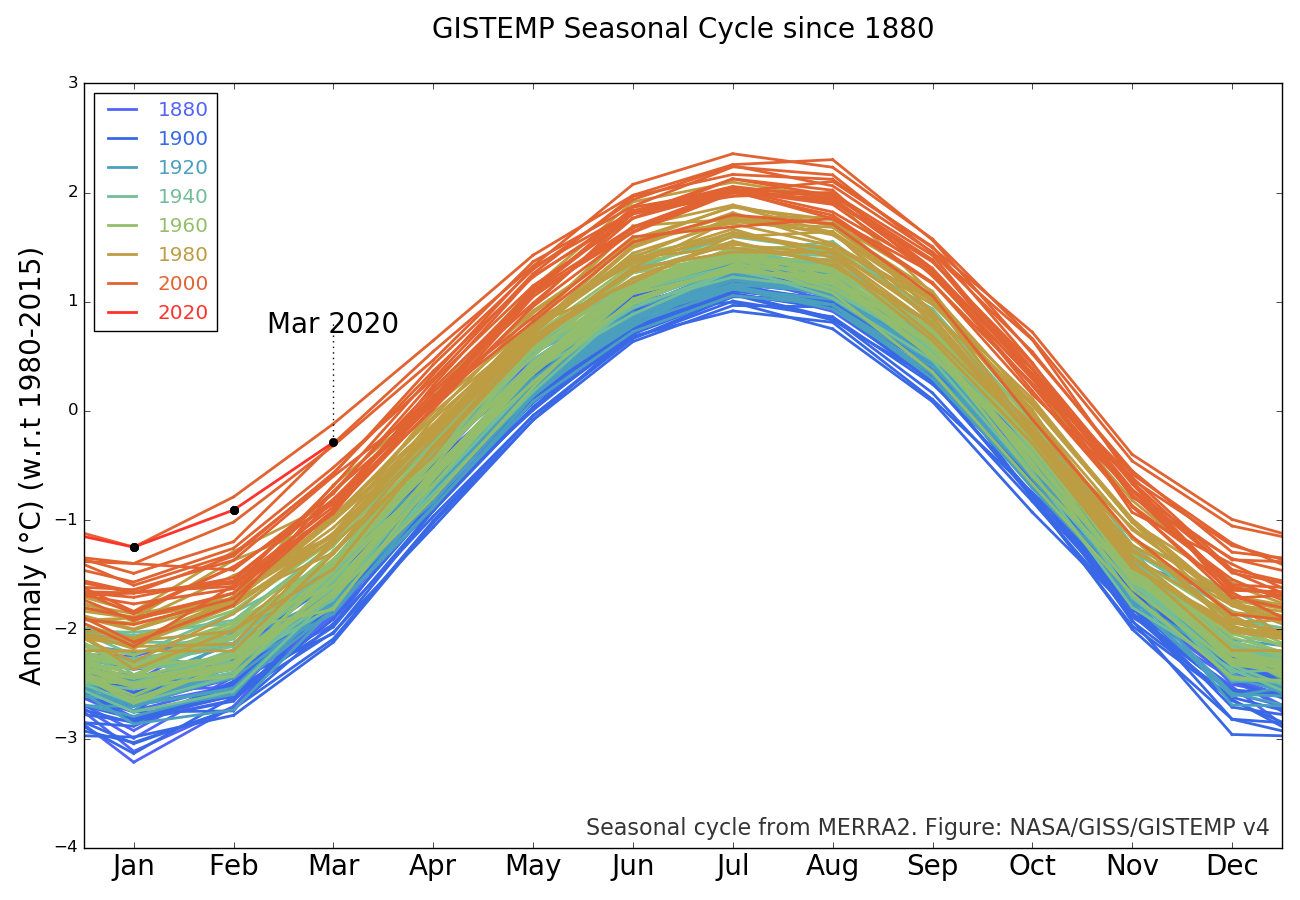 Two key things can be extracted from the above graph: (1) There has been a general trend of warming since 1880, and (2) March 2020 was warmer than February 2020. What about monthly temperature anomalies, which is one of the topics in the question? The graph below portrays monthly GISTEMP temperature anomalies for recent years: 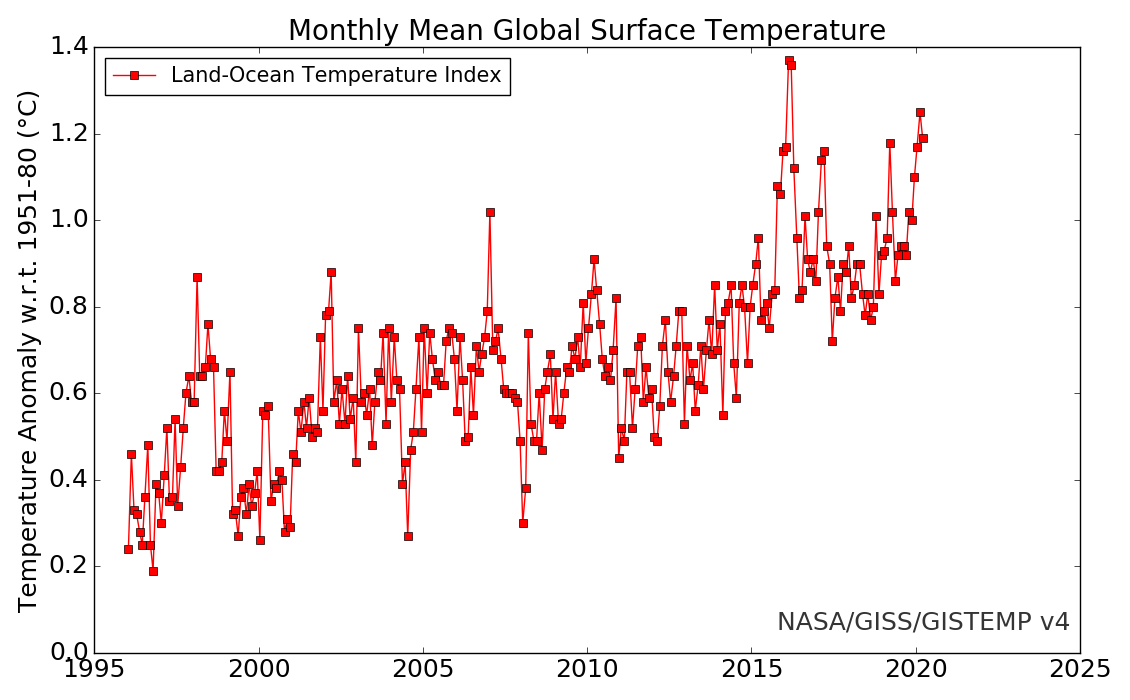 source: Same as above

Thus GISTEMP, which is based on temperature measurements near the surface, may have seen a muted version of the effect observed in the UAH data, which are based on satellite observations. I used "may have" because the 0.06°C drop seen by the GISTEMP model is barely above the 0.05°C uncertainty claimed for that model. The UAH model claims the same uncertainty (0.05°C), so their reported 0.28°C drop was apparently real.

My question is, is lower tropospheric temperature relevant to measuring global warming?

The graph below compares surface-based measures (MET office, NASA, and NOAA) with satellite-based estimates (RSS and UAH). The MET office data starts in 1850 while the satellite data (UAH and RSS) don't start until 1981. 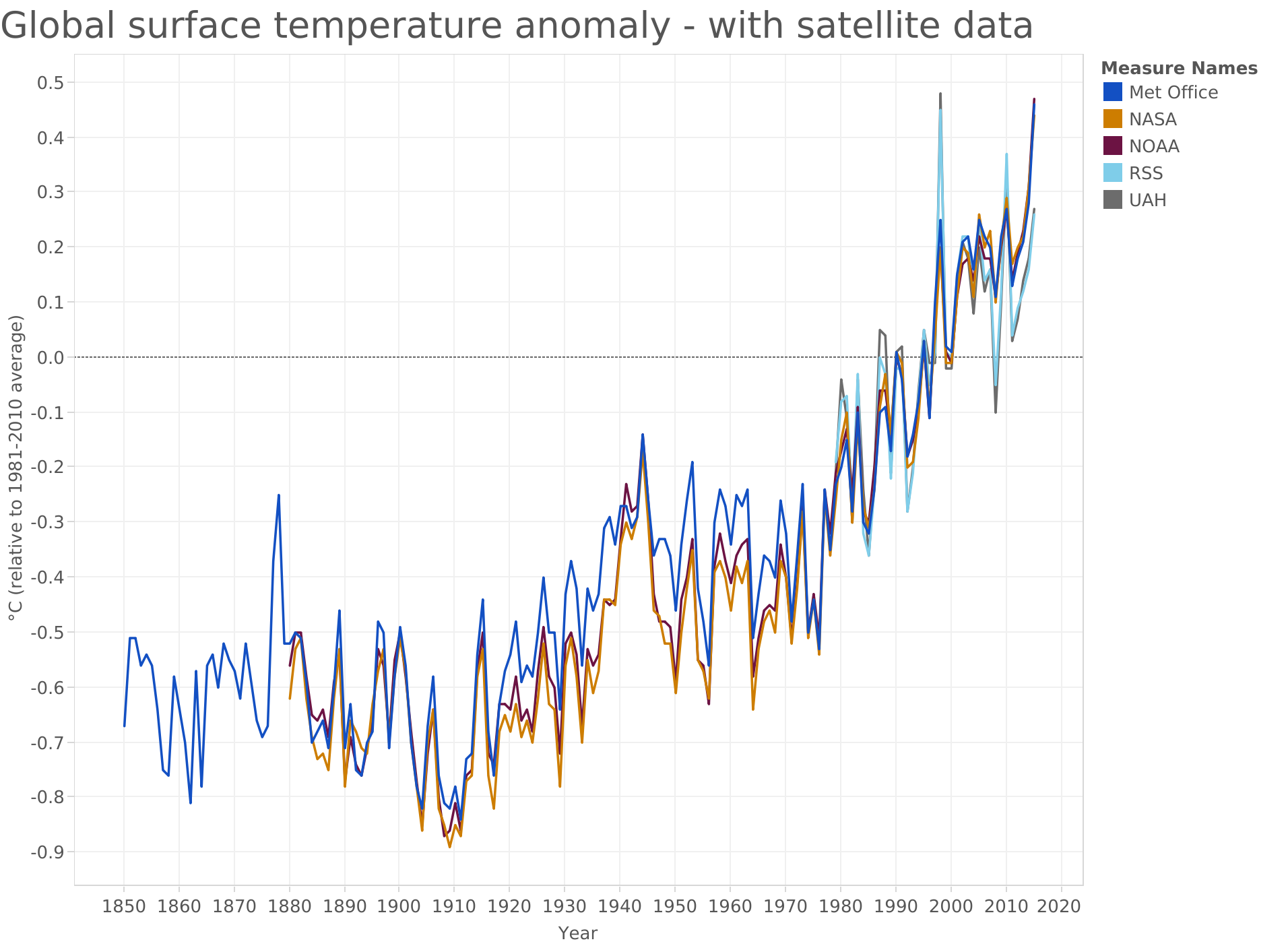 All five datasets see the same general picture, which is temperatures generally rising, but with noisy peaks and troughs. Sometimes the satellite-based observations show variations that are not seen in the surface-based measurements, and other times it's the other way around. But in general, both see warming.

The satellites do not carry tethered thermometers that measure temperature at various heights in the atmosphere. They instead measure the intensities of electromagnetic radiation at various frequencies. The frequencies of interest for the UAH and RSS models are those at which the atmosphere is opaque.

There are issues with this approach. Excessive cloudiness (or the lack of clouds) can confuse the algorithms used to translate observations to temperatures. The instruments that measure the data degrade, and degrade unequally. To counteract this latter effect, radiosondes that do measure temperature are regularly launched to coincide with satellite passes so that the satellite instruments and algorithms can be recalibrated. Finally, while the satellite data do show a recent sharp climb (recent meaning the last six years or so), it's not nearly as steep as the increase observed near the surface by weather stations that actually do use thermometers.

Not the answer you're looking for? Browse other questions tagged climate-change temperature or ask your own question.

7
Are Southern Hemisphere 'Polar Blasts' caused by global warming?
11
How exactly is the "global average temperature" calculated and how reasonable is this method?
5
Global warming cycles
10
Could this study "totally dismantle" Global Warming claims?
6
Is global warming a linear process?
3
How to measure global temperature?
2
How much does earth's core temperature affect earth's global surface temperature