When a volcanic island first surfaces, I assume no vegetation can grow, as it probably only consists of volcanic rock.

How would a volcanic island like Iceland that is far from any continent grow to have soil, and enough of it to grow forests?

Is it formed through hydraulic erosion?
Is it brought from the ocean floor with the currents?
Do aerial currents and birds bring it with them? If it's something that only reaches the shore, how does it move inland?

This image may serve as a base to illustrate the points from the question: 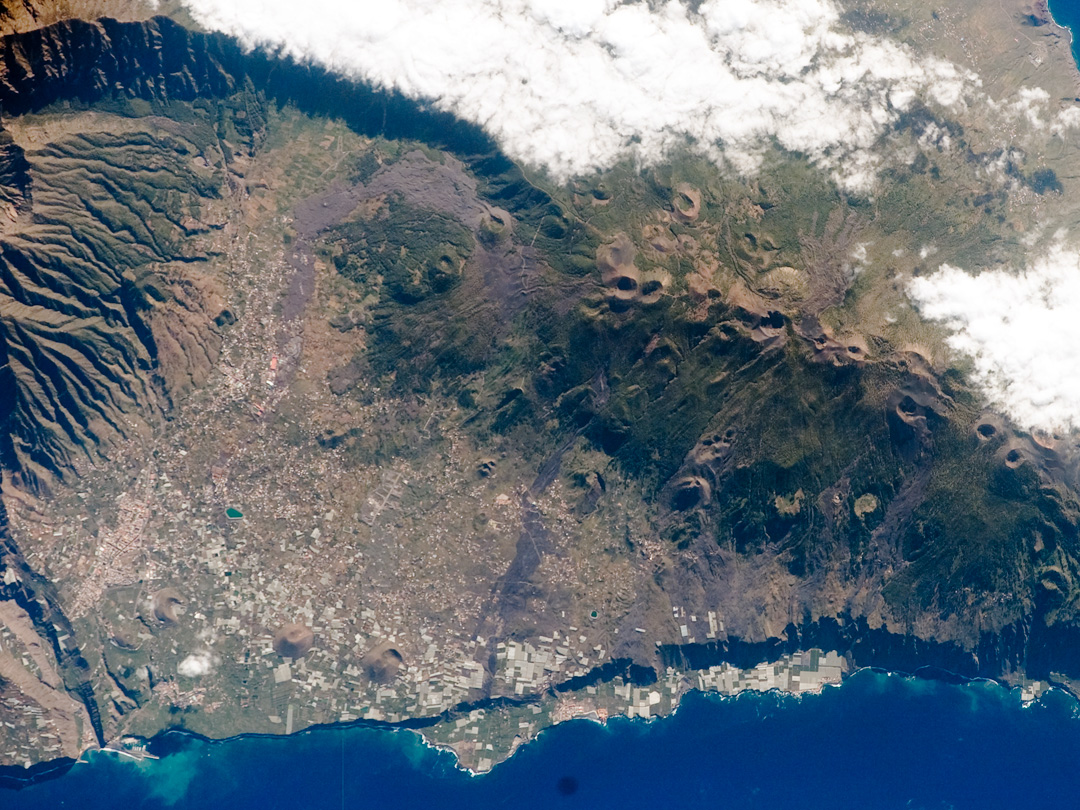 On the left (north) one sees the incisions of erosion at the flank of Bejenado volcano. It formed between ~500 and ~400 ky ago. Volcanic activity has ceased and it is now slowly weathering down. In the center and right one sees the Aridane Valley and the Cumbre Vieja whith its picturesque cones. The Aridane Valley is an erosional structure formed by a series of landslides slightly earlier than the Bejenado. Cumbre Vieja is an active volcano, last eruption is Teneguia 1971 in the south, just out of the right of the image.

On can distinguish several lava flows from historic and modern times by their darker colour. They are between ~70 and several hundred years old, but the whole island is built of such lavaflows, layer by layer (simplifying here). Wind, weather, insects and birds bring on pollen and seeds. Even on a fresh layer, after just a few months to years, pioneer plants like lichen will start to settle. Once exposed and solidified, the basalt starts to weather and erode. These processes form clay minerals, which release the nutrients to grow more and more plants and biocenoses, and so on. And basalt weathers quickly, releasing a lot of nutrients in relatively short time.

So, yes, your asumptions are in principle on the right track. I'm not sure about the direct role of ocean currents here, and soil is not brought in by the wind (at least not in decisive amounts, more or less dust from a nearby continent will allways be in the air), it forms through weathering of the basalt.

Weathering and erosion are very complex. Obviously, chemical and physical processes play an initial role; once plants have settled, their roots cause physical changes, bacteria from decay amplify chemical processes, and so on.

This is mostly textbook knowledge of the general process. For more specific information about the processes one can read up more on basalt weathering, chemical and physical erosion, pioneer plants, and so on.

16
Does volcanic activity fluctuate?
13
How does soil redox potential affect the rate of denitrification?
8
Are coral cays and coral atolls just volcanic islands?
2
How does soil fertility differ between Scandinavia and Russia
19
Do volcanos really create fertile soil?
5
Coral Reef and Volcanic Islands
7
How deep is soil?
4
How does manure & other organic matter improve soil structure?
3
For how long can mid-oceanic islands be volcanically active?