Are we entering a new Ice Age according to Milankovitch cycles?

According to Milutin Milankovitch, the most recent glacial period ended nearly 11,000 years ago, when combination of eccentricity, obliquity, and precession at that time strongly favored deglaciation in the northern high latitudes. Specifically, eccentricity, moving on cycles of 100,000 years, was slightly larger than it is today, and Earth was slightly elliptical than it is today. Obliquity, moving between 22.1 and 24.5 degrees, was nearly at its maximum 11,000 years ago. And precession was pointing at Vega.

But now, 11,000 years after the last glacial period, the combination of orbital parameters changed a lot. Eccentricity is near its lowest, making the total solar radiation on Earth at perihelion and aphelion closer than ever. Obliquity is midway between the maximum and the minimum, shielding a significant area of the polar regions from incoming summer sunlight. And precession is now pointing at the Polaris, the exact opposite of Vega. This combination allows the northern hemisphere to experience its summer solstice at the aphelion, and winter solstice at the perihelion, which significantly curtails the amount solar radiation in the northern hemisphere. The northern high latitudes now are shielded more from solar radiation between the spring and fall equinoxes. These new changes seem to make Earth go in the direction of another glacial period, because snow melting seems to be slowing in the northern high latitudes and snow accumulation quickening. 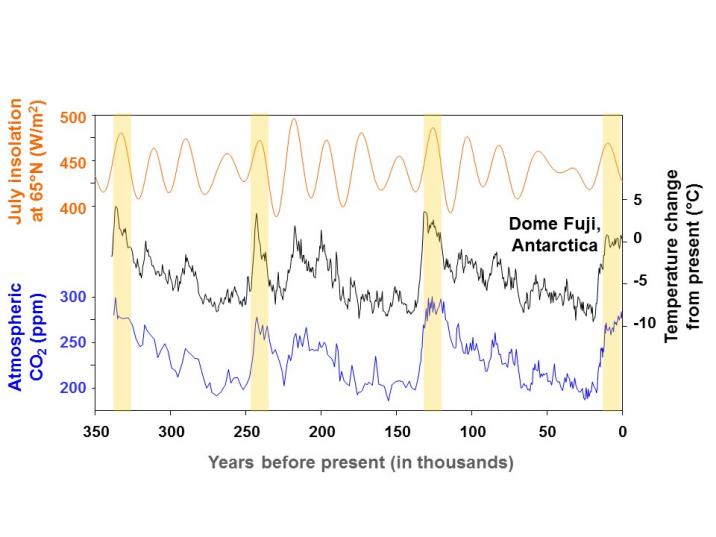 It thus seems reasonable to say we are entering another Ice Age according to Milankovitch cycles.

Some of the Milankovitch conditions would appear to make the Earth ripe for a new glacial epoch starting now, or perhaps a few hundred years ago. In particular, aphelion occurs in early July, and obliquity is low. Both of these make for mild northern hemisphere summers, a key condition needed for snowfall from the previous seasons to linger into fall.

But one other key Milankovitch condition needed to make snowfall linger, orbital eccentricity, argues against a new glacial epoch starting now. The low (and decreasing) eccentricity makes the current dip in summertime insolation at high northern latitudes too small of a dip to trigger the onset of an glacial epoch. Look at the graph you posted in your question. Glacial epochs start when summertime insolation at high northern latitudes drops to very low values. The current local minimum is not low enough to enable widespread accumulation of snow and ice over the summer.

That is true only for last 2.58 million years, possibly the last 34 million years. The Earth has been ice-free for most of the last 550 million years. Ice ages (periods during which ice can form, intermittently, are just short blips.

Orbital cycles doubtlessly play a role in the Quaternary climate record, together with other effects like ice sheet dynamics, but their effect is dwarfed by speed and amount of the current climate change. Even if we were in for a new glaciation from orbital parameters alone (which is not the case), there'd be no use counting on it because they work on longer timescales, reaching from 10s of thousands to millions of years. An answer can, of course, be fleshed out endlessly simply because of the complexity of the processes at work and the increasing knowledge base. Isolating one effect, here M. cycles, likely leeds to misconceptions.

Tl; dr, and to answer the question:

No, we are not due for a new glaciation (not a new "Ice Age", we are in an ice age) from orbital forcing alone.

Additionally, our analysis suggests that even in the absence of human perturbations no substantial build-up of ice sheets would occur within the next several thousand years and that the current interglacial would probably last for another 50,000 years.

Not the answer you're looking for? Browse other questions tagged climate earth-history milankovitch-cycles axial-obliquity or ask your own question.

13
Carbon Dioxide levels appear to be linked to the Milankovitch cycles according to Ice Core data but what is the mechanism?
13
Are ice-ages dependent on an un-equal distribution of land-masses?
8
What would the equilibrium temperature be at the poles in a world without seasonality?
5
What are the relative contributions of planets to the Milankovitch Cycles?
3
What is the most optimal latitude on Earth for the generation of extreme maximum temperatures?