How thin is our atmosphere relative to the size of Earth?

But when we look at some diagrams, Earth's atmosphere is thick. For instance, when someone says that the atmosphere is a thin sheet of air, does he/she take in to account the thick layer thermosphere or exosphere? Or is it just that the diagrams we commonly see have inaccurate visual representation?

You are probably referring to diagrams such as this one, dramatically not to scale, yet from a reputable source (the European Space Agency): 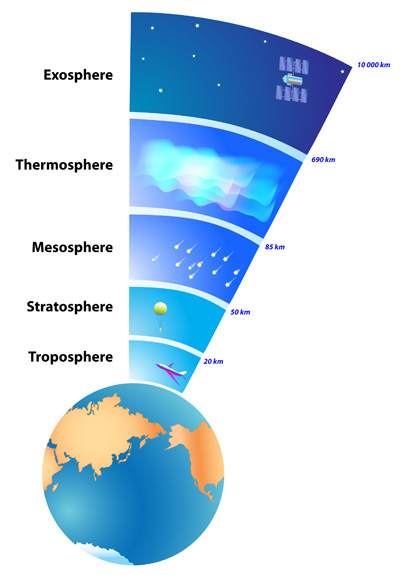 The only reason these diagrams are not to scale is the sake of readability. They could never fit those fancy planes, balloons and satellites if the diagram was at scale. I've tried: I traced this diagram with Inkscape, using Fred's answer numbers and a 1:100,000,000 scale (on my diagram the Earth has a 6.37 cm radius). I purposely forgot the troposphere line so we could see better. So, from the centre outwards, you have:

It would be pretty hard to squeeze a fancy plane in there, or even a caption to label the layers!

The answer to your question depends on where one defines the edge of the atmosphere.

The Earth's atmosphere is layered. The thickness, density of composition of each layer varies. The five layers are:

Because of the low density of the exosphere and also because the Karman Line, which is 100 km above the Earth, which the line designated where Earth ends and outer space begins, the exosphere is sometimes ignored.

The referenced website claims that "The Earth's atmosphere is an extremely thin sheet of air extending from the surface of the Earth to the edge of space. If the Earth were the size of a basketball, a tightly held pillowcase would represent the thickness of the atmosphere."

The website apparently is using the altitude at which the US awards someone Astronaut Wings as "the edge of space" -- 50 miles, or about 80 kilometers. Shrinking the Earth to the size of a basketball would shrink 80 kilometers to 1.5 millimeters, which is about the thickness of a pillowcase. Things can orbit the Earth and have orbited the Earth at 85 kilometers altitude (for a few orbits). Since about 99.998% of the mass of the atmosphere is at an altitude of 85 kilometers or less, that usage is not unreasonable.

The remaining 0.002% of the atmosphere's mass gets thinner and thinner with increasing altitude, but the atmosphere arguably continues to at least half of the way to the Moon. In that sense, claiming that the Earth has a thin atmosphere is incorrect. But that is a thin claim (pun intended).

Not the answer you're looking for? Browse other questions tagged meteorology atmosphere atmosphere-modelling or ask your own question.

6
Take all the CO2 in the atmosphere and put it into a layer on the surface of earth, how thick would the layer be?
6
What is the characteristic time of the loss of the Earth atmosphere, how can it be calculated?
6
How to calculate humidity using outside temperature and outside relative humidity?
3
If the nitrogen and oxygen in our atmosphere were doubled would the pressure double?
2
Atmospheric conditions needed that blocks all bright light during sunsets and allows you to stare directly at the sun
5
How to estimate the settling time of atmospheric particulates as a function of aerodynamic size?
5
Temperature change in Earth atmosphere models?