How it's possible to measure temperature 2000 years ago with such precision?

I saw this graph about the global temperature, it goes back for 2000 years.

How is it possible to measure temperature 2000 years back with such a precision of like ~0.1 C?

What tools are used to measure it? 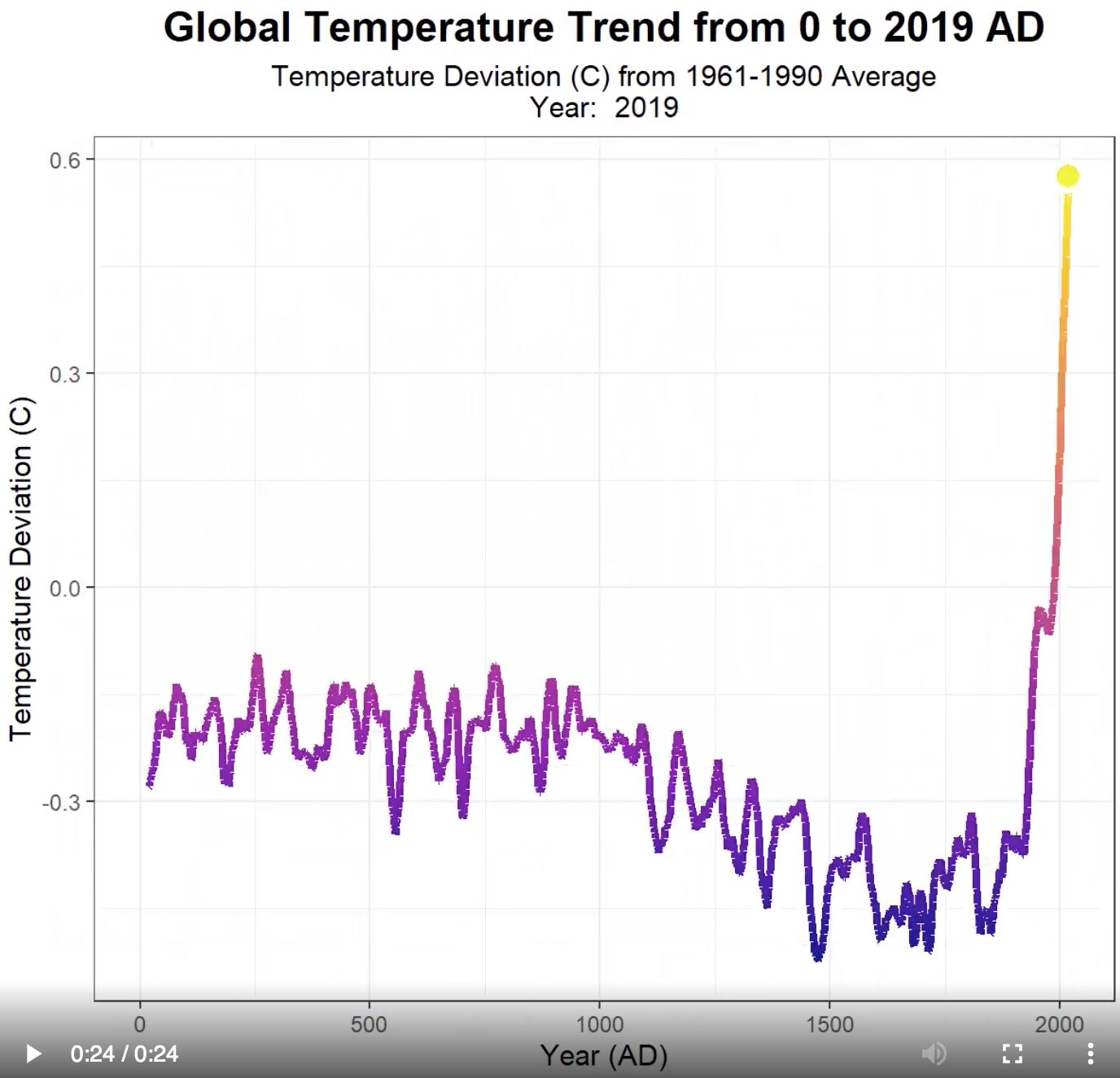 How it's possible to measure temperature 2000 years ago?

Sans the technology used by Bill and Ted ("Bill and Ted's Excellent Adventure"), it obviously is not possible to directly measure the temperature from yesterday, let alone 2000 years ago, or longer. What is used are "proxies", things that can be measured today that serve as stand-ins for things such as temperature in the past.

One example of a proxy is the amount of oxygen-18 in the ice in Greenland and Antarctica. Water with two hydrogen atoms and one oxygen-16 atom has a boiling point of about 100° C. Water with the oxygen-16 atom replaced by an oxygen-18 atom has a slightly higher boiling point. This means that heavy oxygen water evaporates less readily but precipitates more readily than does normal water.

This in turn means that the fraction of oxygen 18 versus oxygen 16 in the water and air bubbles in the ancient ice in Greenland and Antarctica are indicative of the climate at the time that that ice and those air bubbles formed. Despite being a half a world apart, the ratios of oxygen-18 to oxygen-16 over time are highly consistent between Greenland and Antarctica. The consistency of these measures at half a world apart are almost universally taken as being a proxy for something else, and that something else is climate.

There are many other proxies for past climate. There are other isotopes that serve as proxies. The amounts and kinds of pollen in mountain glaciers and ice sheets form yet another kind of proxy. The kinds of plants that do grow in some locales and how fast they do grow is highly temperature dependent. Like ice, buried muds in the oceans also show variations in various proxies. Climate scientists put these proxy measurements together to arrive at the temperatures from 2000 years ago, and even further into the past.

Your graphic shows temperature anomalies. That is, an average temperature is calculated over a large time frame, say 15 ° C. Then each value on the graphic is the CHANGE from that average. Anomalies are nice because "inaccurate" measurement instruments (proxies) can be used. An absolute reading can be off but the reading to reading change will be much more accurate, and other inaccurate instruments can be combined. Regarding precision and uncertainty. What your graphic is showing is an expected value, which can be as "precise" as you want it to be. It is only an expected value. Consider a pair of dice. The expected value is 7, but the roll of the dice can be anywhere from 2 to 12. Of more importance is uncertainty. This is not shown in your graphic. We "expect" a certain value but we are unsure as to exactly what we will measure each time. And now we get into probabilities and distributions. Another key to low uncertainty data is a lot of measurements or a lot of proxies. Some examples of graphics with associated uncertainties are Marcott 2013, Loehle 2008, and Kaufman 2020. I believe Marcott uses 75 or so proxies. Of course present global temperature data use thousands of measurements, which drives down the uncertainty.

17
How accurate are climate proxies in giving us a clear picture of global average temperatures throughout Earth history?

14
Odd structures in 66 year NCEP daily temperature reanalysis
20
Was Judea as desertified 2000 years ago as it is now?
2
National Weather Service "average daily/yearly" (temp, rainfall) life cycle?
10
Does the global temperature vary daily (hotter and colder days)?
9
How is the distribution of Argo floats managed over the Earth's oceans?
5
How to predict when contrails are likely to form over a specific location using public data?
4
3 Billion years ago, the earth is covered with Carbon Dioxide. Where did it go?
2
Why rely on climate models as opposed to paleoclimate data?
1
Have we looked for human-like signals in the geological record?
3
How to measure global temperature?