How does the ozone layer "stay in place"?

It is said about ozone:

a layer in the earth's stratosphere at an altitude of about 10 km (6.2 miles) containing a high concentration of ozone

Over the Earth’s surface, the ozone layer’s average thickness is about 300 Dobson Units or a layer that is 3 millimetres thick. (nasa)

So, how does the Ozone gas stays in that altitude without dissolving?

For the ozone layer to dissolve, it would need something to bind to. Chloroflurocarbons are one very notable thing that it can bind to, but that doesn't exactly answer the question.

While the ozone layer would be 3 mm thick if it was compressed down to the pressure of earth's surface, since it is further up in the atmosphere, it can take up a larger volume (like 20 km thick). The ozone layer is maintained by the Chapman cycle.

To just answer your question directly, the ozone layer is replenished by the sun's UV energy reacting with the oxygen in the atmosphere.

Above accepted answer provide very good explanation to the question. I did some research on it and found some reasons why Ozone layer stays there instead somewhere else.

TL;DR : Higher the altitude, higher the solar radiation energy. That makes ${O_2}$ more excited and easier to break ${O-O}$ bond. Also the concentration of oxygen need to be sufficient, but higher the altitude lower the oxygen as atmosphere become less dense. The equilibrium is where the Ozone layer is.

Ozone photochemistry is driven by the interaction of the Sun's radiation with various gases in the atmosphere, particularly oxygen. The understanding of the basics of ozone photochemistry began with Chapman (1930), who hypothesized that UV radiation was responsible for ozone production and proceeded to lay the foundation of stratospheric photochemistry: the Chapman reactions. He proposed that atomic oxygen is formed by the splitting (dissociation) of $\ce{O_2}$ by high energy ultraviolet photons (i.e., packets of light energy with wavelengths shorter than 242 nanometers) via

Where h is the Planck constant, c is the speed of light, and ${\lambda}$ is the wavelength of the photon, given in nanometers (abbreviated nm, where 1 nm=10-9 meter). Collectively, $\ce{hc/\lambda}$ represents the photon of light that breaks up the $\ce{O_2}$ molecule. The top panel of Figure 5.01 displays the absorption cross section for oxygen multiplied by 10,000. The cross-section is proportional to the probability that a photon from the Sun will be absorbed by an oxygen molecule. While this probability increases for the shorter, more energetic photons, the amount of UV radiation with wavelength shorter than 242nm reaching into the atmosphere falls dramatically with decreasing altitude.

The bottom of Figure 5.01 shows the amount of solar energy per unit area (the flux) of different wavelengths reaching to three different altitudes: the top of the atmosphere, 30 km, and the surface. The amount of very energetic UV (< 242 nm) radiation falls off sharply. Thus, the splitting apart or photolysis of oxygen molecules by solar radiation is relatively slow in the lower and middle stratosphere because the photons of sufficient energy have already been absorbed by molecular oxygen in the upper stratosphere in the Chapman reaction given above. Few such photons are able to penetrate deeply into the atmosphere 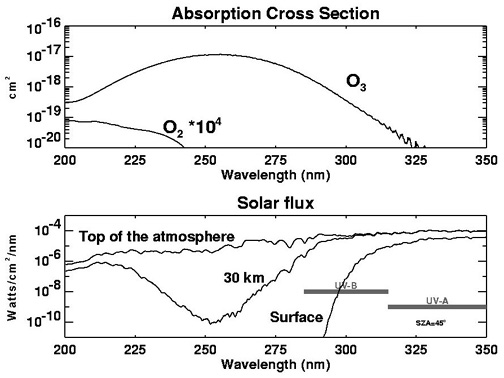 Not the answer you're looking for? Browse other questions tagged ozone or ask your own question.