Urgent, Please help, where can I find worldwide standards of manganese mining?

Hi everybody who sees this post, I need urgent help for finding all official world wide standarts of the manganese mining.

Problem is that, many houses has been damaged in my village with manganese mining, mainly because of underground explosions. Company which runs this type of operations, does not make any information about standarts public.

so my questions are:

Please don't be lazy to answer, it is really important for people here.

Your issue is an issue for all types of mining near residential or built up areas, not just manganese mining.

The trouble with laws and standards for such things is they vary between mining jurisdictions. Even within countries, such as the US, Canada and Australia they can vary between states or provinces. Such countries do not have national legislation for the operation of mines. Each state of province is responsible for such laws within its jurisdiction.

In the 1980s, in the State of New South Wales in Australia, to protect lakes and dams from unexpected drainage and also to protect underground coal mines and the people that work in them from water inundation from lakes, dams or other such large stores of surface water a 45 degree angle rule was used.

From the edge of the lake draw a 45 degree line downwards. Where that line intersects the horizontal, or near horizontal, coal seam that defines the closest proximity the mine was allowed to get near the surface lake or dam.

Because of the geometry of a 45 degree triangle both of the shorter sides are the same length. In the case of this rule the distance from the edge of the lake or dam is equal to the depth of mining.

One of the problems with this rule is coal mines in Australia do not use explosives. Coal is mined using cutting machines via longwall mining.

In the City of Ballarat, Australia, gold mining resumed in the 1990s, after the closure of mines during the 1914 to 1918 world war because of a labor shortage. The mine operates underneath the city of 105 000 people.

Under the license to operate, from the State Government of Victoria:

Our licence conditions state that the vibration limit for blasting is 10 mm/sec and that 95% of all blasts must be below 5 mm/sec.

Existing underground mine development, in blue, as of July 2020. 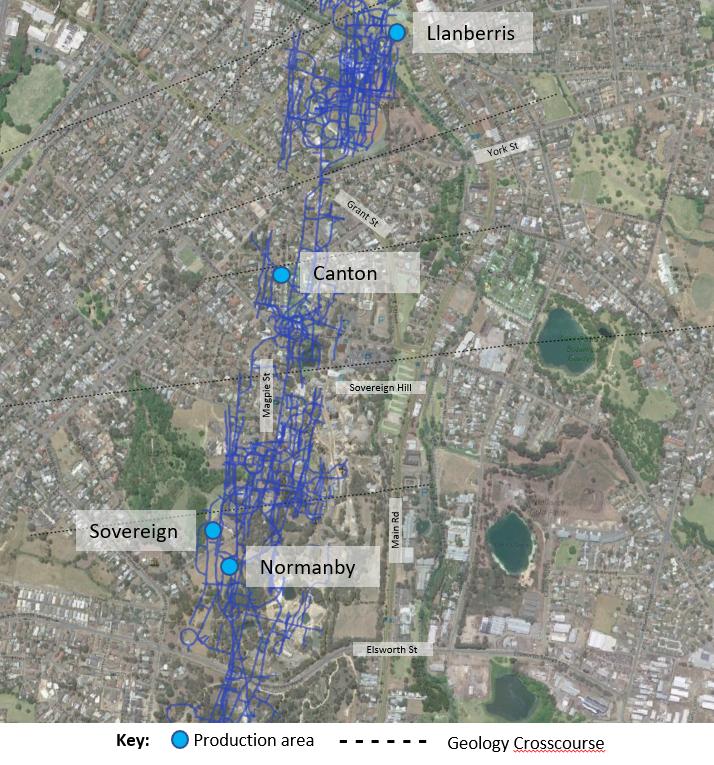 Under a proposed expansion to the mine, the newer region will be approximately 50 m below the surface. See the sectional diagram at the end of the webpage. The surface is at elevation RL 1205 and the top of the Nick O' Time Shoot is elevation RL 1150. I suspect this region will under fields or forest.

Generally, for mines under urban environments 100 m is the closest that mines come to the foundations of buildings. This is not primarily due to blasting waves and seismic activity from blasting, but the requirement to maintain a thickness of competent rock beneath buildings to minimize potential for future subsidence.

Factors that are considered in this thickness are:

Backfill prevents the wall of the stopes from collapsing and it minimizes the amount of subsidence that can occur above the stopes. 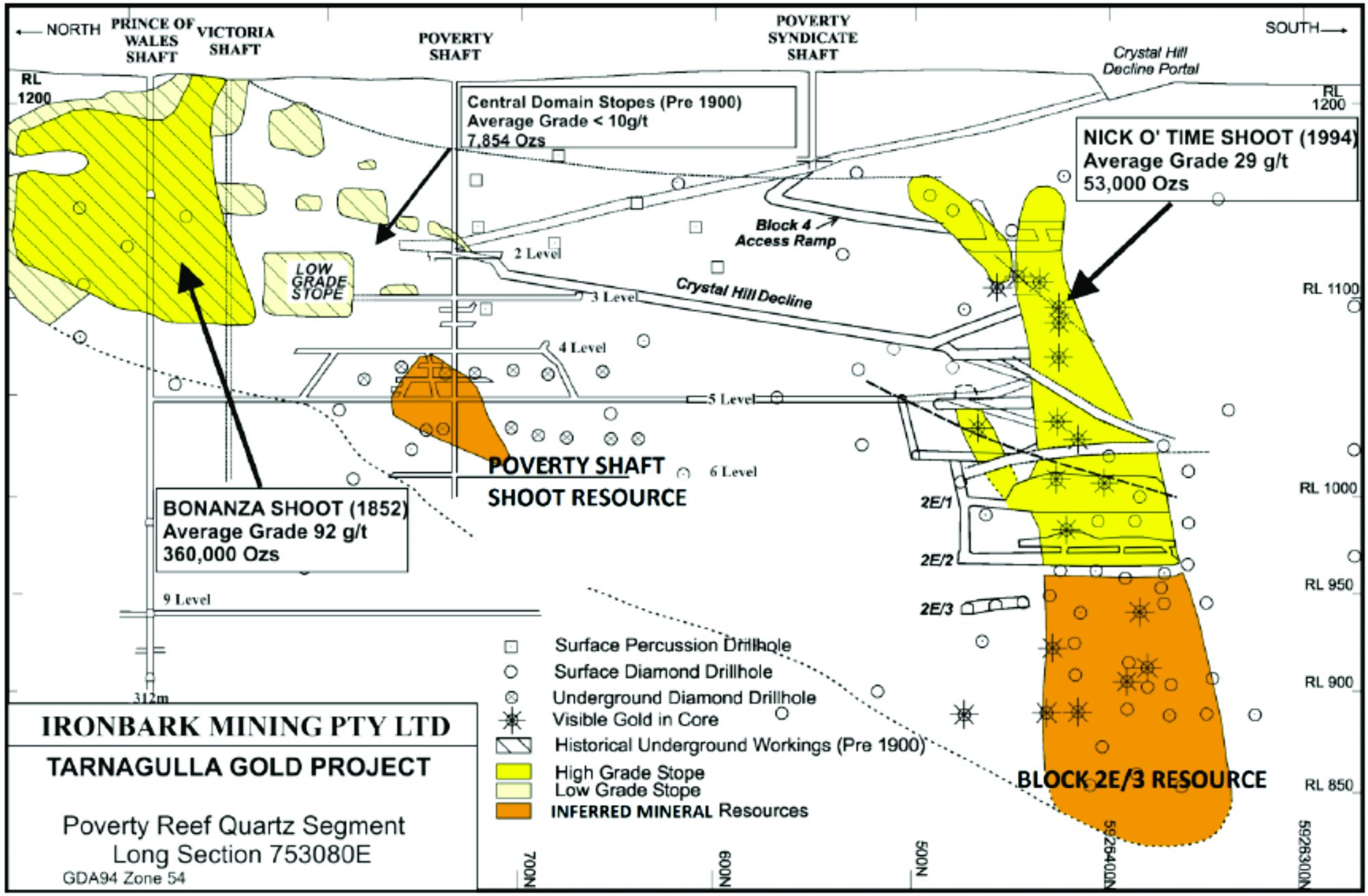 In your situation, something else to be wary of is exposure to manganese dust from the mine or processing plant. The human body requires small amounts of manganese, but too much can be toxic. Excessive exposure can lead to heath problems with the respiratory tract and/or the brain.

Manganese effects occur mainly in the respiratory tract and in the brains. Symptoms of manganese poisoning are hallucinations, forgetfulness and nerve damage. Manganese can also cause Parkinson, lung embolism and bronchitis. When men are exposed to manganese for a longer period of time they may become impotent. A syndrome that is caused by manganese has symptoms such as schizophrenia, dullness, weak muscles, headaches and insomnia.

There is no formula, simple or complex, that will let you calculate how close an active underground mining region can be to buildings on the surface. The reasons for this are:

When constantly made to the same recipe each type of steel can be tested to determine its properties. With this knowledge, structural and civil engineering can design a building, or any other structure, anywhere in the world with confidence knowing the steel will always behave the same way. Likewise for mechanical engineers when they design parts for machines.

Unlike structural and mechanical engineers, mining engineers cannot have the same level of confidence in the properties of the materials (different rock types) they use. With experience they know that a certain type of rock will behave in certain way, but that may not be totally applicable elsewhere.

Because of this, it is not possible to create a formula that can be used everywhere that will state how far an active underground mining region must be from surface buildings.

The other factor which would need to considered is the manner of construction of the buildings near the mine. Buildings that are rigid, made of rock or brick will generally experience more damage, if only just cracked walls, than flexible building made of timber or bamboo.

Flexible buildings can move to certain degree, through swaying, when subjected to forces such as blasting energy, seismic shocks from natural earthquakes and very strong winds. This movement can absorb some of the disruptive energy and the building remains intact.

Rigid buildings have less opportunity to move when subjected to disruptive forces so they have to absorb more of the disruptive energies and in doing so they are more likely to crack and collapse. This is why buildings in earthquake prone regions (such as Italy), or cyclone/hurricane prone regions (such as northern Australia) are now built according to an earthquake or cyclone/hurricane code where reinforcing steel is utilized to increase flexibility of the building, when completed.

From personnel experience I have seen newer, rigidly made, houses such as the one pictured below, 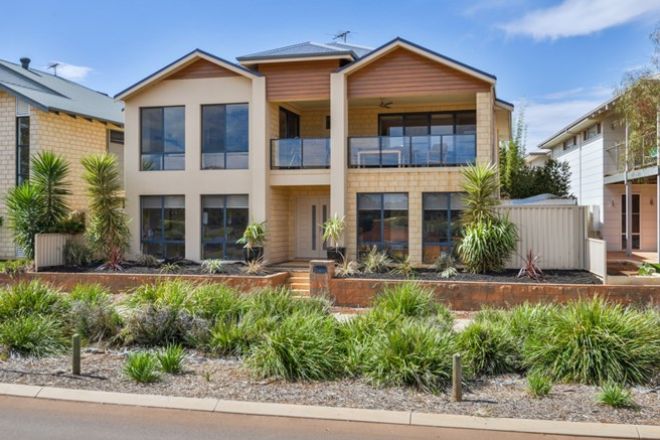 An older, more flexible house, shown below, was only 1 km from the mine and it experienced no damage. 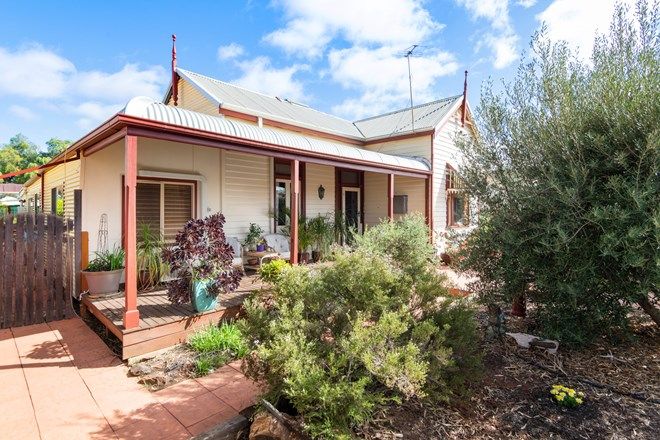 Not the answer you're looking for? Browse other questions tagged geology atmosphere air-pollution mining or ask your own question.

26
Can mining trigger earthquakes?
21
In what geological situations can I find gold?
18
When can taste be used to help identify rocks?
22
Where can obsidian be found?
2
Where can I find a list of active mining claims in my area (Northern Nevada)?
2
Where can I find information about the basic concepts of sedimentary basins?
2
Where to start searching to find more radioactive minerals?
3
Where does all the earth from surface mining go?
0
Where can I find broadband seismic reflection data?
7
How can smartphones help geologists in the field?