What exactly are singular biomes as units?

I guess it depends on which biome classification you use (there are several), but yes, usually tropical forests of Amazonia, Africa & Asia are classified within the same biome. For instance if you take the WWF classification made by Olson et al. (2001), which has 14 terrestrial biomes, they all fall in the "Tropical and subtropical moist broadleaf forests" biome, in green in their figure 1: 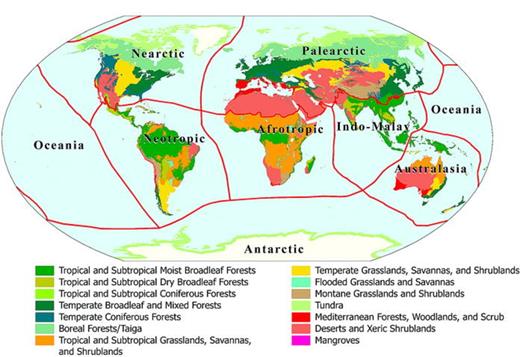 The ecoregions are categorized within 14 biomes and eight biogeographic realms to facilitate representation analyses.

It means they share some global characteristics in terms of climate, vegetation... (described here), but they also have some differences. To see these differences, you have to go to a lower level than biomes: ecoregions. The same study divided the world into 867 ecoregions, that are mostly based on the distribution of species.

6
What would happen if the same soil received waste water contaminants for a long time?
0
What is the technical term for the amount of water within the surrounding enviornment?