What's the official reason why it became so hot in the Kola borehole?

The Kola drill went 'only' a third the way to the mantle, so its deepest point was still closer to the surface than to the mantle. Why did the drillers experience 180 °C when so deep, where did that heat come from? Logically I'd expect it would get colder the deeper you went into the crust (until about halfway to the mantle I guess where temperature started rising again), not hotter.

Unfortunately, you intuition about subterranean ground temperatures is incorrect.

Basements and cellars do provide cooler conditions to store perishable items because the near surface rock insulates against surface heat. 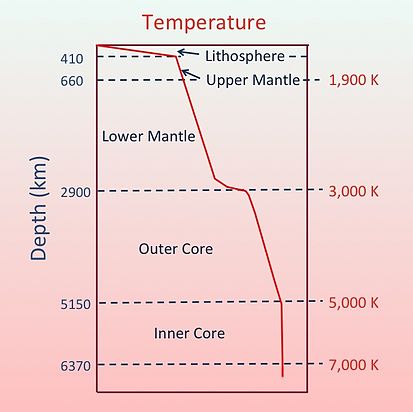 Most of the heat is due to the decay of naturally radioactive elements,mostly within the mantle.

Heat flows constantly from its sources within Earth to the surface. Total heat loss from Earth is estimated at 44.2 TW.

The currently most popular answer here completely fails to mention that your assumption would be impossible, as it would violate laws of thermodynamics, so I will offer my own answer.

To the questioner, your assumption is that there would be a subterranean minimum of temperature, with the surface and the deep Earth being warmer. However, this "heat sandwich" cannot exist as it violate some pretty basic principles about energy transfer (thermodynamics).

As you may know, when warmer matter is exposed to cooler matter, heat will conduct from the warmer matter to the cooler matter. This is in accordance with the 2nd law of Thermodynamics. So, the cool part of the "heat sandwich" would immediately start to warm up as it absorbed heat from the layers above it and below it. It would not be "in thermal equilibrium" with the other layers and eventually it would disappear. So, were you thinking there is a TEMPORARILY cool layer in the sandwich or were you thinking it has been there since the Earth formed? I assure you, based on heat conduction physics, any cool layer within the Earth would have warmed up long ago during the 4-1/2 BILLION years that the planet has existed. So, your assumption could only be right if the layer was recently put there. Is there a way that you propose to create a cool subterranean layer where none had existed?

The ONLY way that cool layer could be created (or persist from the beginning of the Earth) is if it was somehow able to convert thermal energy into another form of energy. Thus, heat coming in from the outer layers of the sandwich (from above and below) would have to be continually converted into another form of energy (such as a change of chemistry or phase of matter). This process would technically not violate the law of conservation of energy, and it would still be a "sink" of heat energy. It would allow your cool layer to persist. HOWEVER...

There is basically no such massive heat sink down where you thought this cool layer exists. So, unless you knew there was a subterranean cooling system in place, your own assumption of a cool layer was just that - an assumption without a robust physical basis. Did you have some reason to assume there was a subterranean cool layer in the Earth? Maybe you're thinking of how on a warm spring summer day, an excavator can dig into the Earth and expose some cool soil. If so, those temperature variations change daily and seasonally, but they don't show up in subterranean rock 100 feet below the soil.

It is a fact that every exposed part of the planet fluctuates in temperature. So, on a microscale, when the surface warms, then technically there is a cooler layer below. However, that layer is temporary and will not be that deep. The surface can change temperature quickly due to effects of light radiation (heating), loss of heat due to infrared radiation (after sundown), evaporation or condensation of dew or frost, or conduction into any air or water that is contacting the surface. (FWIW, convection is not such a surface heat transfer mechanism, as it can only transport heat within a mobile phase of matter, not at the fixed soil interface.)

There is one more mechanism affecting soil and even some rock temperatures, and that is the transport of heat energy (positive OR negative) due to the flow of liquid within the soil or rock. For example, cold rain water draining into a subterranean river can cool th rock it passed through. Still, in general, the Earth's surface typically changes temperature very slowly over time once you get roughly 10-50 feet down, depending on where you are and how much water is percolating through. The temperature profile below that depth remains steady, heating up as you go deeper.

By the way, the reason the Earth is so warm in the interior, after having 4-1/2 billion years to cool off since it's formation, is that uranium in the Earth is decaying. This atomic decay releases heat. The atomic energy release is basically the same mechanism as in a nuclear fission reactor, but the reactions are going MUCH more slowly. Since the core of the Earth probably has extremely little uranium, that means the Earth's core is not generating heat through fission. However, core of the earth keeps as warm as it nowhere to LOSE its heat. (Technically, there are a couple of relatively very minor heat sources and sinks in the core, but I won't raise address them here.)

Here is a graph of how soil and rock temperatures might change at a site:

Not the answer you're looking for? Browse other questions tagged crust mantle drilling or ask your own question.

5
If the Kola Superdeep Borehole were opened today, what would come out of it?

7
What's the difference between the upper & lower mantle?
5
Why is uranium only in the crust, really?
3
Why do we see the limestone on top of Cambrian layer?
7
How straight is the Kola superdeep borehole?
4
What's up with the "jelly sandwich" analogy of the lithosphere, asthenosphere and mesosphere?
3
Why is the Lithosphere-Asthenosphere Boundary an Isotherm?
6
Why doesn't the Earth's outer core dissolve into the mantle?
5
If the Kola Superdeep Borehole were opened today, what would come out of it?
4
Why is the concentration of highly siderophile elements so uniform in the mantle?