Lightning activity day curve - why it has high and narrow peak?

Atmospheric potential gradient changes during the day, as different areas of lightning activity come under Sun. 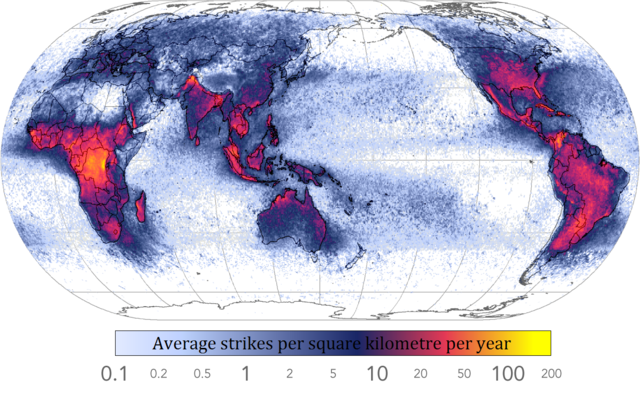 This illustration from "The Carnegie Curve" by R. Giles Harrison shows contribution of different regions. 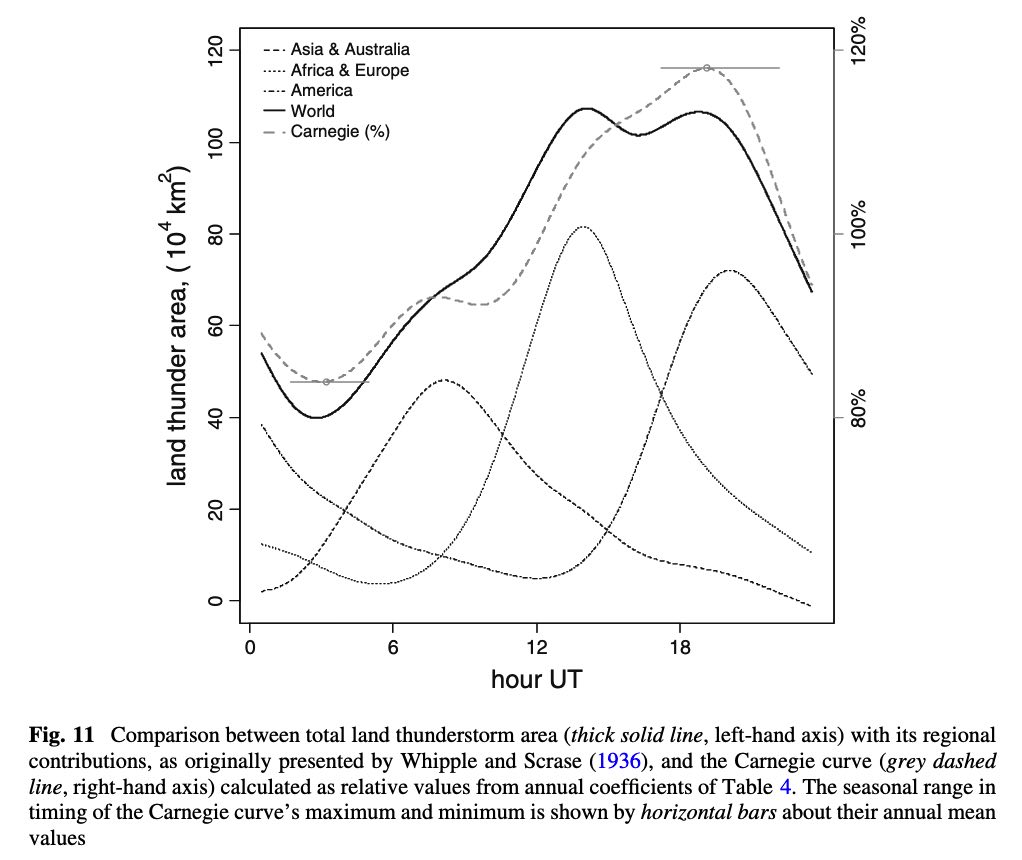 Why region curves are so narrow and high - about 6 hours wide if lightning storms go day and night? As I understand most of cloud energy is stored in latent steam heat, so why sunlight makes such big contribution?

I think the simple answer to your question is that sunlight widens the potential area for storms by producing a better convective environment, whereas nocturnal storms are highly localized based on climatological factors.

While a minority of storms do occur overnight due to local mesoscale features such as nocturnal low-level jets, the majority of storms will occur because of convective forcing. To have a convective environment, you have to have a parcel of air that is warmer than that of the environment it is traveling through, and that is what gives you lift. The easiest way for that to happen is to have parcels rise up from the ground at the peak heating of the day while the ground is much warmer than the air above it.

In an older (and still infinitely useful) thought process of meteorology, there is a temperature known as the "convective temperature" that can be gotten from a Skew-T diagram. It takes into account the dewpoint and vertical temperature profile of the atmosphere and produces a temperature at which the surface level has to get to in order to set off thunderstorms. The best way to get to and beyond that temperature is through the heating of the sun. Additionally, when the air is warmed through heating from the sun it makes the environment ripe for convective initiation through triggers such as fronts.

Your graph VALIDATES your perception of lightning happening at all times of the day. The graph ALSO shows that average frequency of lightning (well, thunder) is simply HIGHER during the mid-to-late afternoon. If you think that your local observations are contrary to this data, you would first need to diligently and accurately keep observing records. First, track thunder, not lighting. Lightning is perceived more easily at night. That is one key part.

Second, you might have a biased memory. If you want to challenge this data, take accurate observations on your own. You might be surprised that what you thought you were observing was not actually what was happening. :-) Your local storms might not produce as much thunder (and thus lightning) as you think. Consider that massive tropical thunderstorms can produce more lightning than you can imagine, and this can happen day after day in the tropics. In the US, you can also get mesoscale systems that are blasting frequent lighting, but those don't occur as often as you may think. Sure, you might see thunderstorms every night for two weeks at some point in the summer if you live in the Deep South, but you won't see the same frequency of lightning day-after-day that you will see in some tropical storms. Consider that a complex that generates 800 lightning bolts is equivalent to TEN daily storms with 80 strikes. Then recall, the strikes you see at night don't count. You're counting thunder, so you can eliminate the bias of lightning being more visible at night.

In the end, the sunlight is clearly a dominant factor in timing, as confirmed by the data. Of course, the thunder is generally more frequent when the sun is providing the most energy for thundercloud development. Some days that energy is not utilized well (it is reflected by cloud cover, there is a massive inversion, the air is too dry, etc.). On average, though, that is when the greatest amount of lightning-generating cloud development will occur.

Not the answer you're looking for? Browse other questions tagged meteorology lightning or ask your own question.

5
Why is thunder and lightning rare, even though it rains frequently?
3
Are there "transparent" clouds?