What factor(s) could cause this sort of temperature increase, mid-night/early morning?

I am new to having a PWS (Personal Weather Station). I have not found any answers explaining why this sometimes occurs aside from explanations given factors that were not variables in my case (winds, cloud cover etc). While I had a minor gust (< 1 mph), no change in direction from what it's been all week (directly north). No change in cloud cover, fog, mist etc. Steady barometric pressure rise (overall slight) all night at 30.12 In to 30.26. Every once in a while I see a massive spike in temperature like this with no easily discernable factors and would like to understand why. Furthermore, I checked 5 other weather stations in the valley floor. It looks identical/exact same affects in a 30 mile range. However, as soon as we rise below the valley floor maybe 500 - 1000 ft, we see a steady decrease all night with a slight flattening during this time, but no increase.

Details of my location: Northwest Montana, mountain surround valley, river bottom, low/lowest point in the valley 1/2 mile from river edge. Station is 6ft above ground, clear from any buildings, trees, structures by at least 200ft in all directions. 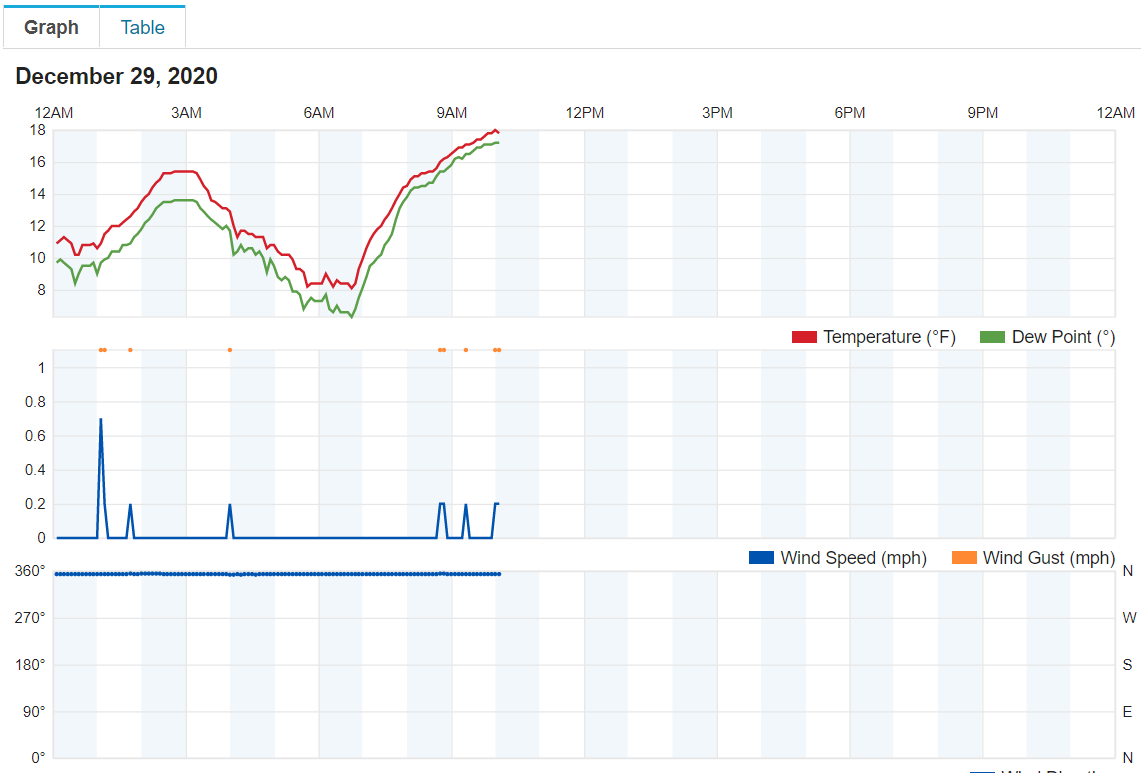 Temperature swings opposite from those expected by the diurnal radiation pattern (warming during the day, cooling at night) are typically due to air coming in from other locations. Synoptic (large-scale) fronts can bring such rapid shifts, but often tend to be more sharp (rather than gradual) and in one direction (as the front passes). However occasionally there can be interesting oscillations near more stationary fronts, such as this event from Oklahoma in February 2018: 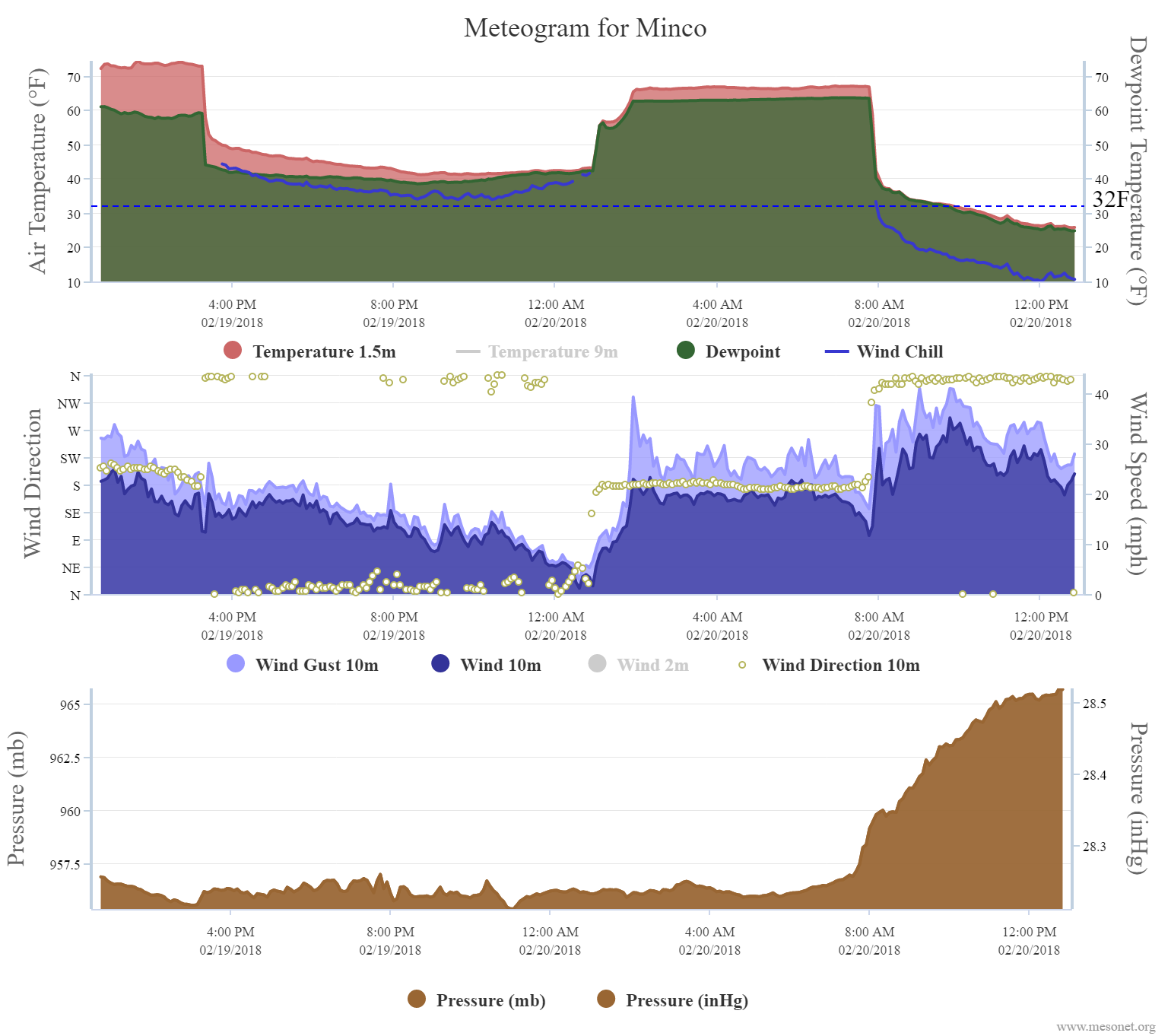 More often, smaller nighttime fluctuations have to do with more mesoscale (local) features. Different regions cool differently, and the pressure differences caused by the resulting differences in density move the air around... two common causes of such shifts can be circulations around oceans or other large water bodies (probably not pertinent to you!) and terrain-induced circulations (probably much more pertinent!). The ones that are probably most impactful at night are downslope winds, which are caused by more rapid cooling on the mountain than the air around it, and downvalley winds, caused when enough air builds up from downsloping. This lecture from Stephan De Wekker gives some more details on some of these features and other terrain flows.
Often slight shifts in larger-scale wind direction and the varying temperatures over different degrees of mountains and valleys can lead to quite a complicated set of rises and falls in temperature through the night.

It's also not impossible that are some issues with your station, I was initially concerned with a few things:

But a look at observations across the region for the time period:

does show perhaps your data isn't impossible. The meteograms from Libby [KS59] and Missoula [KMSO] below do show very weak/calm winds and fairly similar temperature/dewpoints movement. 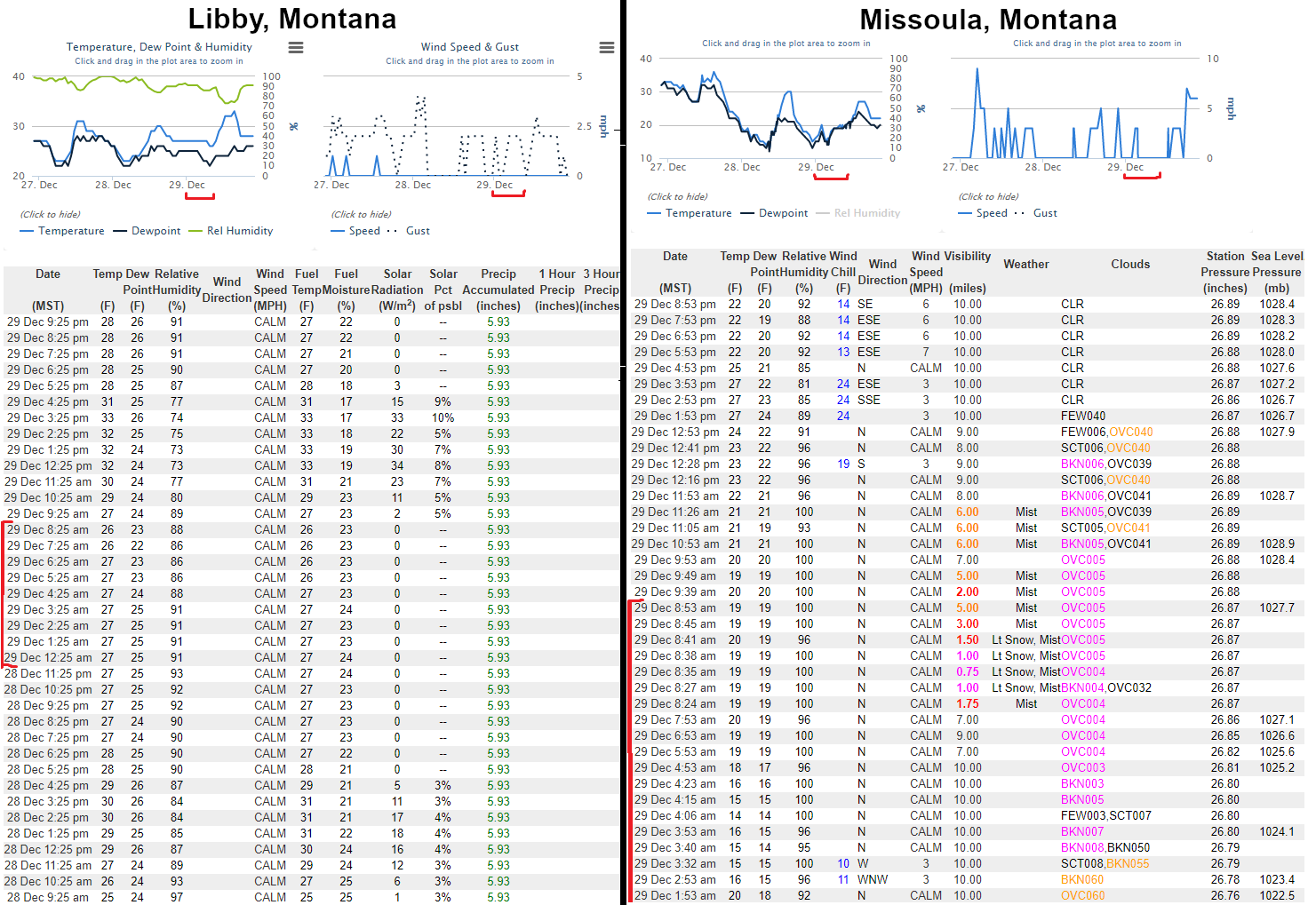 Still, there's no north winds (except when calm, which is a placeholder when there is no wind), and a slight bit more fluctuation between temperature and dewpoint, so it wouldn't hurt to check whether the station is properly observing.

I believe typically flows down a local mountain tend to be cooling at night, as the densest air (coldest) collects along the river. Other features driven by forced air movement can bring warm air to valleys, like foehns and large-scale downsloping, but those tend to bring drier air in.
So assuming it's a valid feature, it appears to be something complex. It can take years of observations to really understand the flows around complex topographic areas. But I would posit a guess that maybe a slight wind shift gradually pushed the pooled dense valley air away from you far enough to get you into slightly warmer air away from the river valley bottom. Or maybe winds become enough to mix down warmer air above. Differences in snowcover/melting effects or clouds/precipitation might also play a part in what you experienced. But in that part of the world, I'd expect you'll see many more peculiar local temperature fluctuations over your time observing!

Not the answer you're looking for? Browse other questions tagged meteorology temperature or ask your own question.

4
What are the possible mechanisms that could cause a rapid drop of temperature over few days?
7
How much could Earth's temperature increase by the time we run out of oil reserves?