This is regarding the Correction due to 'Curvature of the drop' made by Lord Kelvin to the Clausius-Clapeyron Equation.

So, the idea is that, during large scale nucleation of water vapour into cloud droplets, the equilibrium vapour pressure over a droplet of radius r, is given by $$e_s^{\ curved}(r) = e_s(\infty)*e^{\frac{2\sigma}{\rho_w R_vTr}}$$ where, T = temperature, $R_v$ is gas constant for water vapour, $\rho_w$ is density of drop, $\sigma$ is Surface tension, and $e_s(\infty)$ is the equilibrium vapour pressure over a plain surface at temp T.

Now, when $e>e_s$, then the graph of $\Delta G$ vs r, initially increases up to a critical radius R and then decreases as shown: 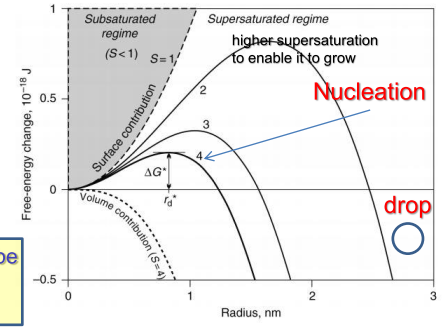 Then, to find the equilibrium condition, we said that The drop is in equilibrium with the surrounding when the radius = R, since the slope of $\Delta G$ wrt r is 0 at r = R

However, I feel that the equilibrium condition arises for the radius r, for which, $\Delta G$ = 0. This interpretation does affect the final formula much. It just replaces the "2" with a "3".

Browse other questions tagged atmosphere clouds thermodynamics cloud-microphysics or ask your own question.

4
How and why humidity and vapour pressure change as a parcel of air with an unchanging amount of water vapor rises, expands, and cools
5
Equation for solar radiation at a given latitude?
2
How does total pressure affect relative humidity and how do I correct my hygrometer for pressure?