Why is Somalia so dry?

Most deserts are a result of the rainshadow effect, cold currents, the subtropical ridges, or a combination of those. Knowing this, how is the Somali desert caused?

It is notable since it has a desert climate close to the equator, which is known for being wet. Furthermore, it is on the East Coast of Africa, and Eastern Coasts within 0 to 45 degrees latitude are almost always wet.

In summary, my question asks for the cause(s) of the Somali desert being so dry and why it isn't a Mediterranean climate.

Somalia's dryness despite it's proximity to the equator (which should provide ample opportunities for year round rainfall) has perplexed most meteorologists. In this following answer we will try to explore some of the reasons behind this paradox.

A plot of the climatology of the June- September monsoon(JJAS) shows the winds 850 winds flow parallel to the shore. The winds encounter what is known as a friction differential i.e. the friction over the land is greater than the friction of the ocean surface. Presuming the low pressure is over the land(during the day due to solar radiation) the resulting frictional difference causes the winds to diverge over the coastal areas. For details on this reference (4) explains the math behind it.

The climatology of the lower level stream function is shown for the whole year but it does not change much if you take it for any of the two seasons (JJAS) or (NDJF) individually. There is only lower level wind divergence. 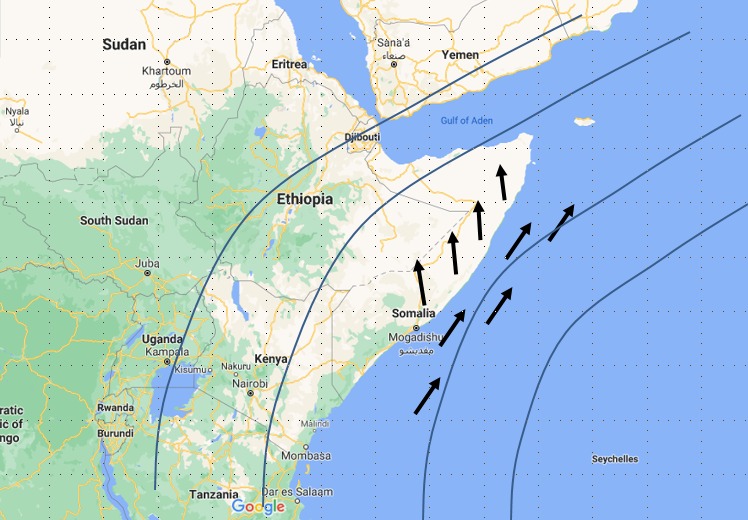 The contour lines are the isobars.

I have made my version of Fig 2.29 in (3)(due to copyright) that shows off shore winds parallel to the shore and winds diverging onshore due to the frictional differential. This phenomenon of winds diverging at the coast is not unique to Sonalia but is present everwhere you have coastal deserts and winds flowing parallel to the shore. If the winds did approach the coastline either perpendicular or at an angle then there would be greater low level wind convergence (850 hPa level)as the air would "pile up" at the shore promoting ascent of the air and precipitation. That would be reflected in the climatological 850 hPa wind streamfunction values.

The same off shore south easterly winds cause upwelling along the coast and bring in cooler SSTs. The phenomenon is reversed during the North East Monsoon (Oct - March) the NE winds flow parallel to the shore.

Please note that the lower level wind divergence shown here is for large scale winds and Somalia may indeed get some rains due to a mesoscale phenomenon known as the Sea Breeze front but that depends on whether the coastline is convex or concave over a short distance.

Somalia does get some rains due to the westerly flow due to some combination of mid latitude disturbances and tropical influences and these are known as the Gu rains. The Ethopian Highlands and the East African Rift Valley act as a barrier for the westerly moist laden flow (and the Somalian region is the leeward region) but some amount of moisture does slip by through the transition period in between the two seasons.

The Somali Desert is in the rain shadow region of the Ethiopian Highlands. This has contributed to the aridity of the region. The diversion of moist air to the low-pressure regions in the South West Monsoon of Asia.

This is a paraphrased piece of text from Quora. It is Notable how dry Somali is, which I regularly notice when looking at maps, how the color changes from green to rust red on a map as you move to Somali

The rain shadow effect is the reason of the cause of most deserts that were not victims of the Earth Rotational Adjustments for thousands of years.

Not the answer you're looking for? Browse other questions tagged climate ocean-currents monsoon coastal-desert or ask your own question.

4
Why is equatorial Africa wetter in the west than the east?
5
What causes these periodic high-pressure blobs along the west coast of South America?

19
What fraction of dry land is below sea level?
17
Why does the Inter tropical Convergence Zone shift?
10
Wet and dry seasons - what are they and how do they form?
7
Why is Venezuela so dry?
3
Why is Thermohaline Circulation (THC) pivotal to life on Earth?
2
Defining dry/wet season in Europe
2
Why the Indian Monsoon doesn't start in the north?
7
Why is it that "With higher CO2, the dry gets drier and the wet gets wetter"?