Can there be ice in the core because of pressure?

Because there is so much pressure in the earth's core, the inner core is solid but what happens if you manage to add some water in the inner core or near it. Does the pressure make the water solid or does it evaporate? do iron and nickel only turn solid under pressure?

what happens if you manage to add some water in the inner core or near it.

It will probably react with the solid iron to form iron (oxy)hydride:

Our observations indicate that H2O is likely introduced into the deep Earth through reaction between iron and water during the accretion and separation of the metallic core. Additionally, reaction between Fe and H2O would occur at the core‐mantle boundary, given water released from hydrous subducting slabs that intersect with the metallic core. Accumulation of volatile‐bearing iron compounds may provide new insights into the enigmatic seismic structures observed at the base of the lower mantle.

In other words, the question of whether the water would be ice, liquid, or vapour is a non-question because water as molecules of H2O would cease to exist.

Regarding the question of what would happen to just water if you would put it in core-like pressures and temperatures, the answer is simple: we don't know. I don't think anyone attempted that experimentally. It will probably not be a gas - pressures are way too high for that. Since the melting point of H2O is much lower than that of iron, I suspect it will be a liquid.

Something from the comments:

On quora, they said that high pressure would lower the melting point of ice, not as expected, probably making it vapor

This is only relevant at relatively low temperatures because of the anomalous crystal structure of ice. For most compounds, you need greater temperature to melt something which is at pressure. It's actually opposite for water, and closely related to the fact that ice floats on water (which is very counter-intuitive - usually solids are denser than liquids). But at high temperatures, of hundreds and thousands of degrees, water starts to behave normally under high pressure.

The answer is maybe -- if you are looking deep in the mantle rather than in the core, and if you are prepared to accept "superionic" ice in which the molecular structure of water has broken down and instead, you have mobile protons embedded in an oxide-ion lattice. In the core itself the water reacts with the hot iron under pressure, actually forming a metal hydride.

Deep inside the Earth, where pressures reach GPa levels and temperatures exceed 2000 K, water may exist in two forms, neither of which is anything like the material we are familiar with at the surface. One of these is a supercritical fluid in which the temperature and pressure are not only too high to allow vapor-liquid equilibrium, but also high enough to turn the protons into highly mobile species in this fluid, which is therefore chock full of ionic species. The second of these forms is a "solid" in the sense that it contains a rigid lattice of oxide ions, but the hydrogen ions move among them as if they were still liquid. This is the long-sought and now (since 2019) verified superionic ice.

The University of Arizona [1] shows a calculated temperature-pressure relation as one proceeds deep into the Earth, given in the figure below.

The sharp rise in temperature in the middle of the chart corresponds to the boundary between the mantle and the core. We see that just short of this boundary the pressure is about 100 GPa and the temperature about 3000 K.

Under these conditions, some calculations such as that from Millot et al. [2] indicates that the water may turn into the superionic ice state at this boundary. In the figure below, the point at 100 GPa and 3000 K lies in the white border region where, according to the authors' calculations, the water may be an ionic supercritical fluid or superionic ice. At lower depths, however, the temperature and pressure are more firmly in the green ionic fluid range. 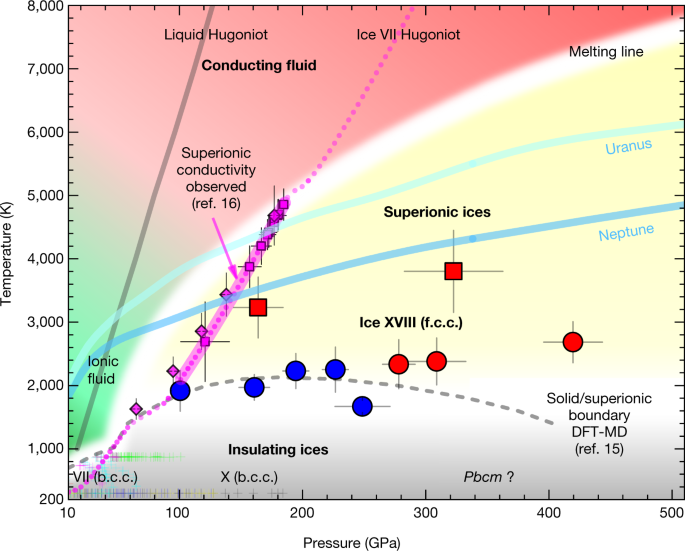 And then there was none

Water vapor is well known to react with iron and steel in industrial processes, forming iron oxide and hydrogen (we usually limit the water vapor content and add hydrogen to the atmosphere to halt this reaction). Such a reaction also occurs under the high pressure and temperature of the core [3], although it takes a different course. Instead of evolving as gas, the hydrogen from the water forms a layer of iron hydride, a material which, as a pure compound, is unstable under normal conditions. This acts as a source of hydrogen that may reduce material in the overlying mantle. See the figure below.

1. Educational material from the University of Arizona.

To find an answer to this question, we need to look back at the formation process of the Earth's Core. Simply put, the Layered structure of Earth is a result of density stratification. Denser metallic elements which could not form complexes sunk to the center to form the core of the Earth. Hydrogen being the lightest element, it won't be practically available in the Earth's core to form water. We can convincingly say that there is no water in the Earth's core which rules out the possibility of water being present as a solid, liquid or vapor state.

Even, if we suppose water is present in the core somehow. It will possibly in the supercritical state or it would have formed complexes with other metalic elements.

Not the answer you're looking for? Browse other questions tagged core or ask your own question.

2
Source of heat in the center of Earth