Is there any intuitive and easily understandable way to help students understand the triangular facet of outcropted stratigraphy?

I find it difficult to teach college students about using the triangular facet on remote sensing images to judge the dip direction of sedimentary formations. Is there any intuitive way that can help? 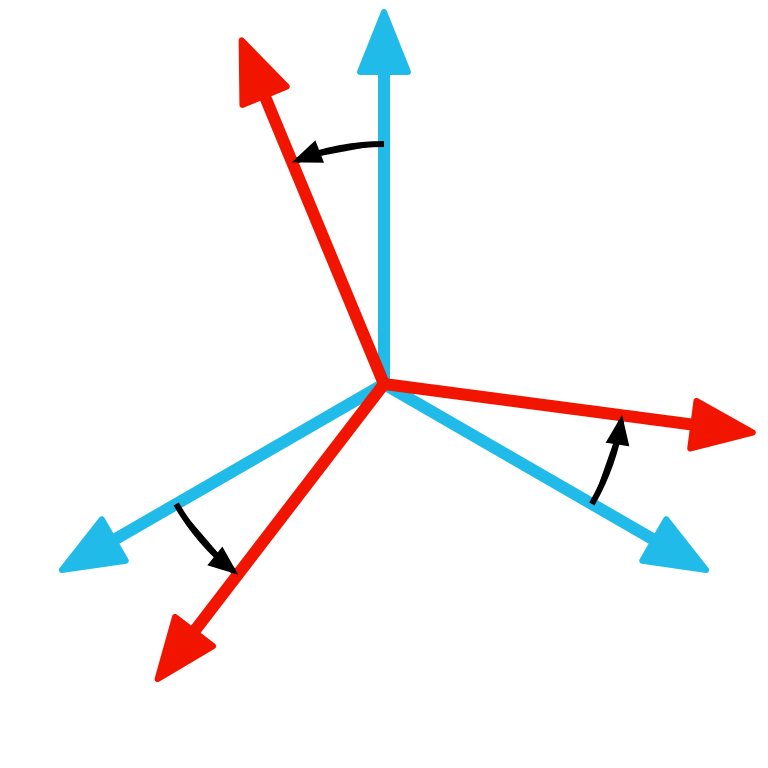 I'll denote one of those coordinate systems as the East, North, Up coordinate system (ENU for short), with unit vectors $\hat E$ (East), $\hat N$ (North), and $\hat U$ (Up), and the other as the dip, strike and outward normal coordinate system (dsn for short), with unit vectors $\hat d$ (dip), $\hat s$ (strike), and $\hat n$ ((outward) normal). In terms of the above diagram, imagine the trio of blue vectors corresponding to East, North, and Up while the trio of red vectors corresponding to dip, strike, and (outward) normal. As an instructor, you might well want to create a better diagram, with labels.

There are singularity issues with both of these sets of coordinate systems. East/North/Up doesn't make sense at the Earth's poles as all horizontal directions are south at the North Pole and north at the South Pole. The dip/strike/normal doesn't make sense wherever the surface is flat. I'll ignore those issues. (Bonus question for your students: Address those singularities.)

Aside: This is not always the case; there are DEMs that do not follow this rule. Those are DEMs one should toss in the nearest digital trashcan.)There are also some DEMs that do follow this rule but occasionally have triangles whose outward normal has a downward rather than upward component. An example is an extremely detailed DEM that models not only the topside but also the underside of an overhang. Satellite-based DEMS typically don't do this as satellites cannot see the underside of an overhang. (Extra credit: Have your students address such cases!)

We're looking for $\hat s$ and $\hat d$, the unit vectors that point in the strike and dip direction. Both of these vectors lie in the plane of the triangle formed by $\vec A$, $\vec B$, and $\vec C$. This means that both $\hat s$ and $\hat d$ are normal to the outward normal $\hat o$. The strike vector is horizontal, which means that it is also normal to the unit upward normal. To find $\hat s$, compute the cross product of $\hat U$ and $\hat n$ and normalize. (Note: Normalization is impossible if $\hat U \times \hat n \equiv 0$. This only happens if $\hat n$ is parallel or antiparallel to $\hat U$, in which case strike and dip are not well-defined.) Finally, the dip unit vector, which is what we're after, is the cross product of the strike and outward normal unit vectors: $\hat d = \vec s \times \vec n$. Bonus: Ask your students to show that if $\hat d$ exists, it always has a downward component.

Not the answer you're looking for? Browse other questions tagged geology remote-sensing structural-geology or ask your own question.

6
Maps and Faults
2
Future geology professor wants to know quick fixes to get me through unstimulating period
3
Was there once a glacier over Starcke national park in Queensland Australia?
5
Satellite ocean near-surface air temperature data
5
What are the cubic formations found inside Larimar gemstones?
10
A rough picture about the ground-level ammonia (NH3)
2
Is there a name for a type of algorithm or processing which uses only one source of data as input?
2
How can we distinguish fold and cycle of sedimentation on a remote sensing image or in the field?