Why is the Ring of Fire there? [duplicate] 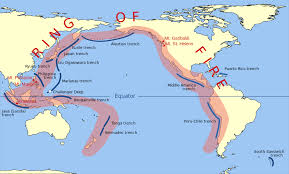 Any help would be appreciated!

This question is very similar to: Why does the "Ring of Fire" pretty much define "Pacific Rim"

The high levels of volcanoes and earthquakes are primarily due to subduction. So why is the Pacific surrounded by subduction zones?

Think back to Pangaea. This was a supercontinent that formed in the late Palaeozoic. Virtually all of the Earth's land masses were concentrated in one large supercontinent. When this broke up, the new continents moved away from each other. Fast forward 200Ma or so, and you find that the continents have moved so far apart that they are now converging on a point on the other side of the planet - the continents are moving towards each other! Hence the remains of the super ocean (which was actually multiple ocean plates - today's Pacific & Nazca plates, plus the Farrallon plate (RIP),etc ) is shrinking as the continental plates move towards it. This destruction of the ocean plate(s) occurs at subduction zones.

This is a big picture generalisation. Not all of the Pacific's boundaries are marked with subduction zones (e.g. North America has two large strike slip systems + a new spreading ridge). Also, not all of the continents are converging on each other. Africa is doing a pirouette, India is moving northwards, etc.

Not the answer you're looking for? Browse other questions tagged geophysics earthquakes plate-tectonics geography or ask your own question.

13
Why does the "Ring of Fire" pretty much define "Pacific Rim"
13
Why are there more intense earthquakes in Iran than in Iraq?
14
What tectonic mechanisms cause the North and South Islands of New Zealand to be so geologically different?
16
(Why) Is there more landmass on Earth's Northern hemisphere than the Southern Hemisphere?
6
Why is ground water rising on these forest rings?
4
Why do human populations concentrate near fault lines, volcanoes, etc.?
4
Why do loose, soft soils amplify earthquake vibrations rather than dampening them?
6
Why doesn't the Earth's outer core dissolve into the mantle?
7
What would be the effects of a large forest fire on soil in other places?