How can a starting point south of the north pole to an endpoint north of the south pole be halfway around the world?

NOTE: I first posted this question to the GIS StackOverflow site, but someone there said my question would be better suited to the Geography or Earth Science site. GIS seems the perfect place for the question to me, but in case that is correct I'm posting it here.

I had asked a question (which has been answered) here about finding locations halfway around the world from a given location, in the example provided from Monterey, California.

The east/west location (same latitude) is Birjand, Iran. This makes sense to me.

But the north/south location is at a location north of the south pole which, even though it is a calculation I came up with and was verified there as being correct, doesn't make sense to me.

The reason why my brain is having a meltdown is because it seems plain to me that the north pole to the south pole would be halfway around the world, whereas Monterey is well south of the north pole, and the location "agreed upon" as the halfway around the world point from there (from a north/south, same longitude standpoint) is in the South Pacific between New Zealand and the southern tip of South America, which is north of the South pole.

It seems to me that the halfway point should be as far "down" from the south pole as Monterey is from the north pole.

Am I wrong? If so, what is faulty with my logic?

If I'm right, what is the halfway point, then, from Monterey?

I am obviously not a geographer/cartographer, but this is getting to confusinate/fascifuse me more all the time. Based on Earthworm's answer, the exit point after "drilling through the earth" from Monterey is in the Pacific Ocean as shown with pushpin #2 here (same longitude as Monterey, with the reverse latitude): 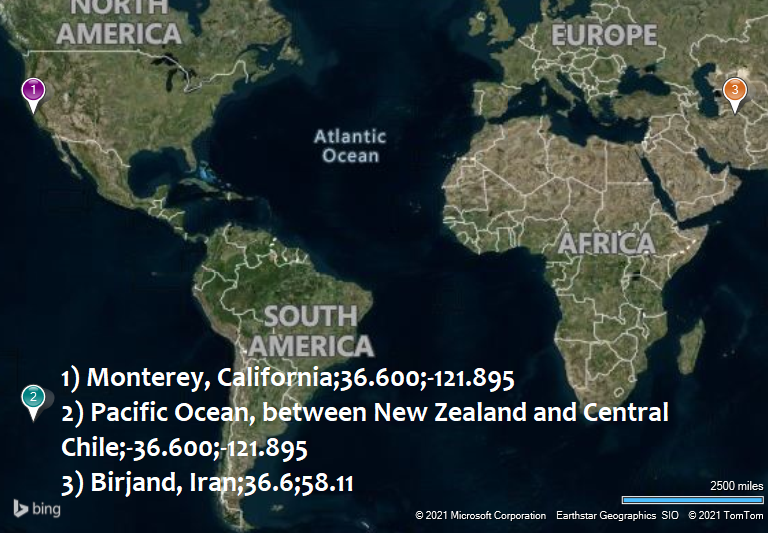 However (there's almost always a "however"), based on Andy M's answer and the link he provided, these are the two points (#2 having both a different latitude AND a different longitude than Monterey, but the same longitude as Birjand, Iran): 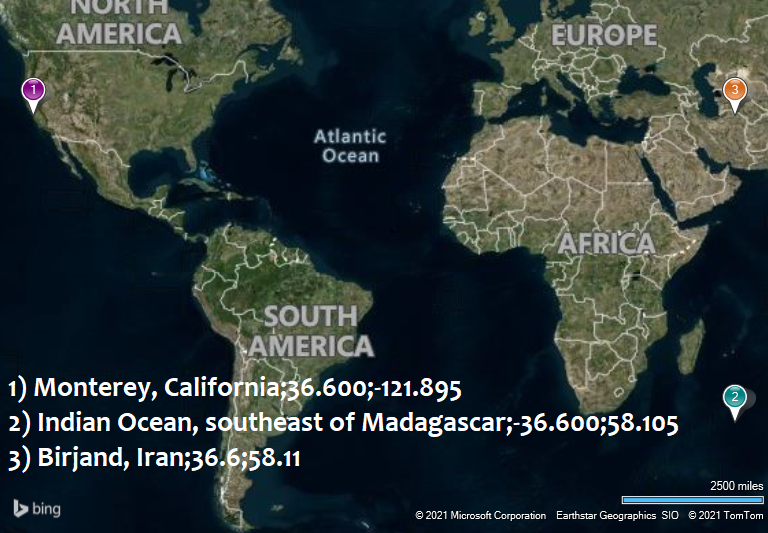 The first antipodal point (Pacific Ocean) seems slightly more logical to me than the second one (Indian Ocean), but both differ from what my ungeometric brain was expecting before I delved into this, which was a point "south" (actually "negative north," I guess*) of the South Pole, "beyond" Antarctica (if ya know whaddi mean).

I posted a substack article tangentially/partially about this here.

cartography coordinate-system
Share
Improve this question
edited May 10 at 11:21

I think you are too into the numbers. When talking about longitude and latitude they are two different things. Longitude goes east and west from a point on the earth from 0 to 180 degrees east and 0 to 180 degrees west and describe semicircles of equal length running from the north pole to the south pole. Latitude however is in degrees north or south of the equator and describe circular lines around the earth that get smaller as you get closer to the poles. See this image: 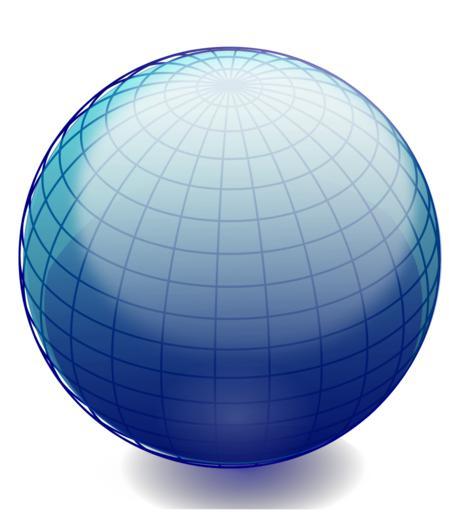 It seems to me as if you are looking for the antipode of a point on earth's surface. Let's use our fingers (real life is a bit more complicated because Earth is not a sphere and different coordinate systems exist).

You already have the antipode's longitude, which is your current longitude plus or minus 180°, clamped to plus/minus (or East/West) 180°, the one that lands you in Iran. From that antipodal longitude, just mirror on the equator (not a pole) Monterey's northern latitude to the southern hemisphere, so that 36°N become 36°S.

That is equivalent to poking straight through the earth's center, entering in Monterey and coming out on the other side.

Goes without proof that the pole distances, the distances from Monterey to the north pole and from its antipode to the south pole, are the same in both cases, trivially calculated by subtracting latitude from 90°.

There is a site that will show you the antipode for any location, and takes you through the calculation if you need it - https://www.geodatos.net/en/antipodes/united-states/monterey.

It all depends on exactly what you mean by "halfway around the earth heading due north or south."

One theoretical interpretation of that phrase is that, starting in Monterey, California, you start heading south, and you continue walking south until the distance that you've walked south is half the circumference of the earth. (Throughout this answer, I'm going to assume that the earth is a perfect sphere.)

You are perfectly correct in thinking that theoretically, if you were to do that, then you would end up at some point south of the south pole.

Obviously, however, you can't go south of the south pole. Once you reach the south pole, it's impossible to continue walking south, because every direction is north.

However, there is another interpretation of the phrase that makes a lot more sense. We can instead interpret the phrase as meaning that, starting in Monterey, California, you start heading south, and then you continue walking along a great circle of the earth until the distance that you've walked is half the circumference of the earth. If you do this, then you will walk south until you reach the south pole, and then after you pass the south pole, you will be walking north instead.

If you do that, then you will end up at the antipode of Monterey, which is that point that you identified in the Indian Ocean southeast of Madagascar.

It sounds like you've misunderstood Earthworm's answer as stating that the halfway point is in the Pacific Ocean west of Chile. Actually, that answer gives the point in the Indian Ocean near Madagascar as the "halfway point."

It wouldn't make any sense to me to designate the point in the Pacific Ocean west of Chile as the "halfway point." After all, the distance from Monterey to that point is much, much less than half the circumference of the earth.

The Pacific Ocean point on your first map image can't be the right one if you look at a globe more. Or perhaps it can help to consider an analogy of digging into a hill to kind of reflect upon the rough idea that the Earth is 3-D\curved... if you were to dig in at Monterrey and came out at the same longitude in the Pacific, it'd be quite akin to digging into your hill towards the center... and coming out on the same side you started on. If you're going through the center, you need to come out on the opposite side, and looking at a globe, Monterrey and your SH Pacific point aren't really doing that. Sort of like these crude diagrams: 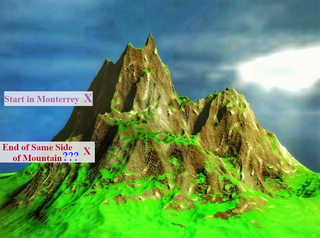 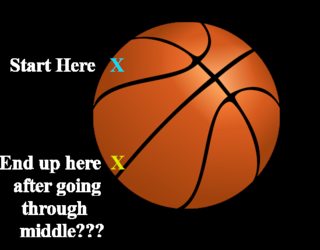 Likewise with digging through the Earth... there's a latitudinal component (north-south) and a longitudinal component (east-west) to all surface motion, and the ≈ 13,000 mile trip to get to the other side of the Earth will be some sort of combination of the two. The North pole to south pole trip is the extreme case where all motion is latitudinal north-south. The equator trip is the extreme case where all motion is longitudinal east-west. All other cases will require some of each, in the right proportions to aim the line between them through the center. Not unlike trying to cross from one side of a flat circular wall clock to the other. On it, you must be on the "opposite side" of the center both "up-down" and "left-right" to have passed through that center. So is the concept on the globe. 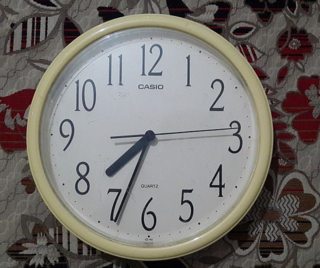 It's easy to get confused by great circle distances when looking at a flat map.

I find it much easier to understand the concept while looking at a globe, or if I don't have any, on Google Earth.

The trick is to rotate the globe and redefine the north pole, so that Monterey is on "top" of the world. 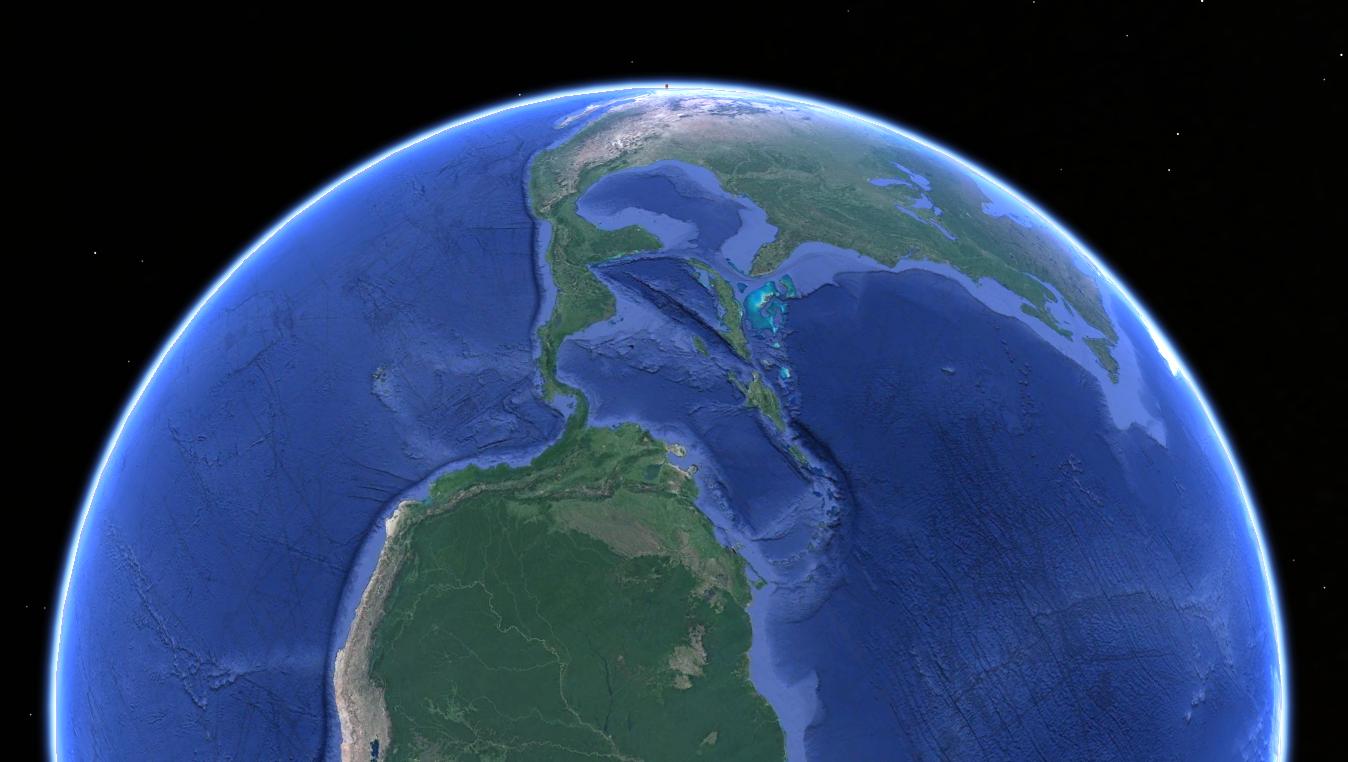 With our new definition:

Once you found an interesting place with this technique, you can use the original latitude/longitude grid to get the correct coordinates.

In comparison, the newly defined "equator" looks like a sine curve on a flat map. The green area is the "northern hemisphere", the white line represents every point 10000km away from Monterey: 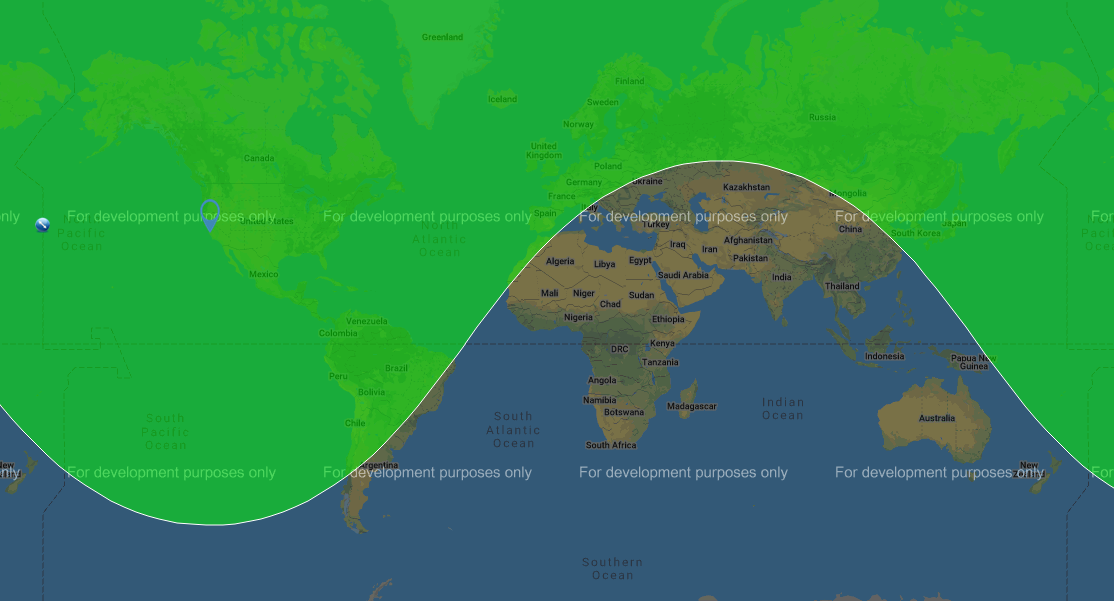 Not the answer you're looking for? Browse other questions tagged cartography coordinate-system or ask your own question.

6
Why is the north considered as up, and south as down?
5
How to calculate 'real-world' geometric height from ERA reanalysis data
7
How can smartphones help geologists in the field?