What is this geological formation in the Santa Cruz mountains that looks like a cave interior?

Stevens Canyon Road in the Santa Cruz Mountains (near Cupertino, California) passes right next to a large rock formation that, to my untrained eye, reminds me of the inside of a limestone cave. Here's some photos I snapped from when I was there: 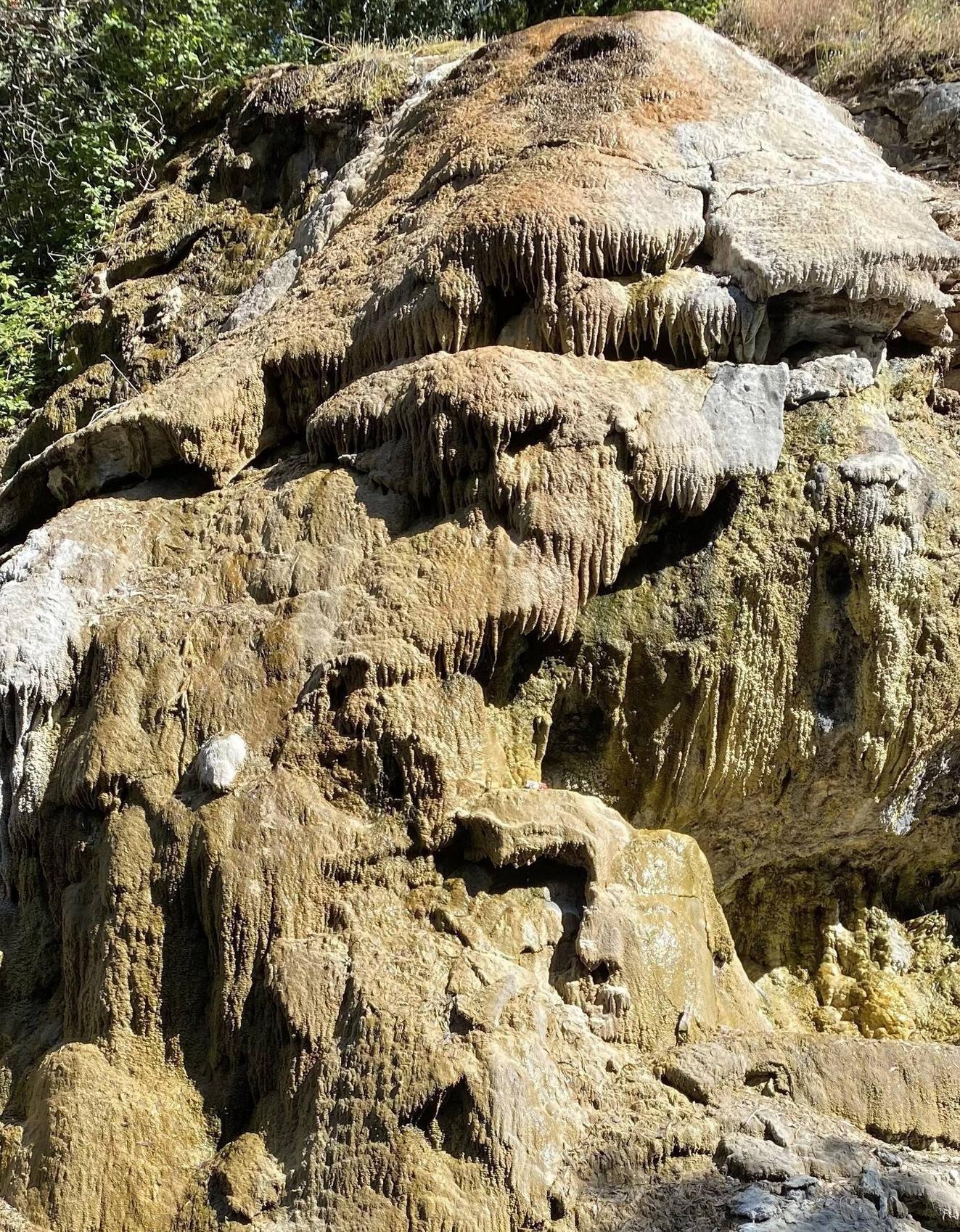 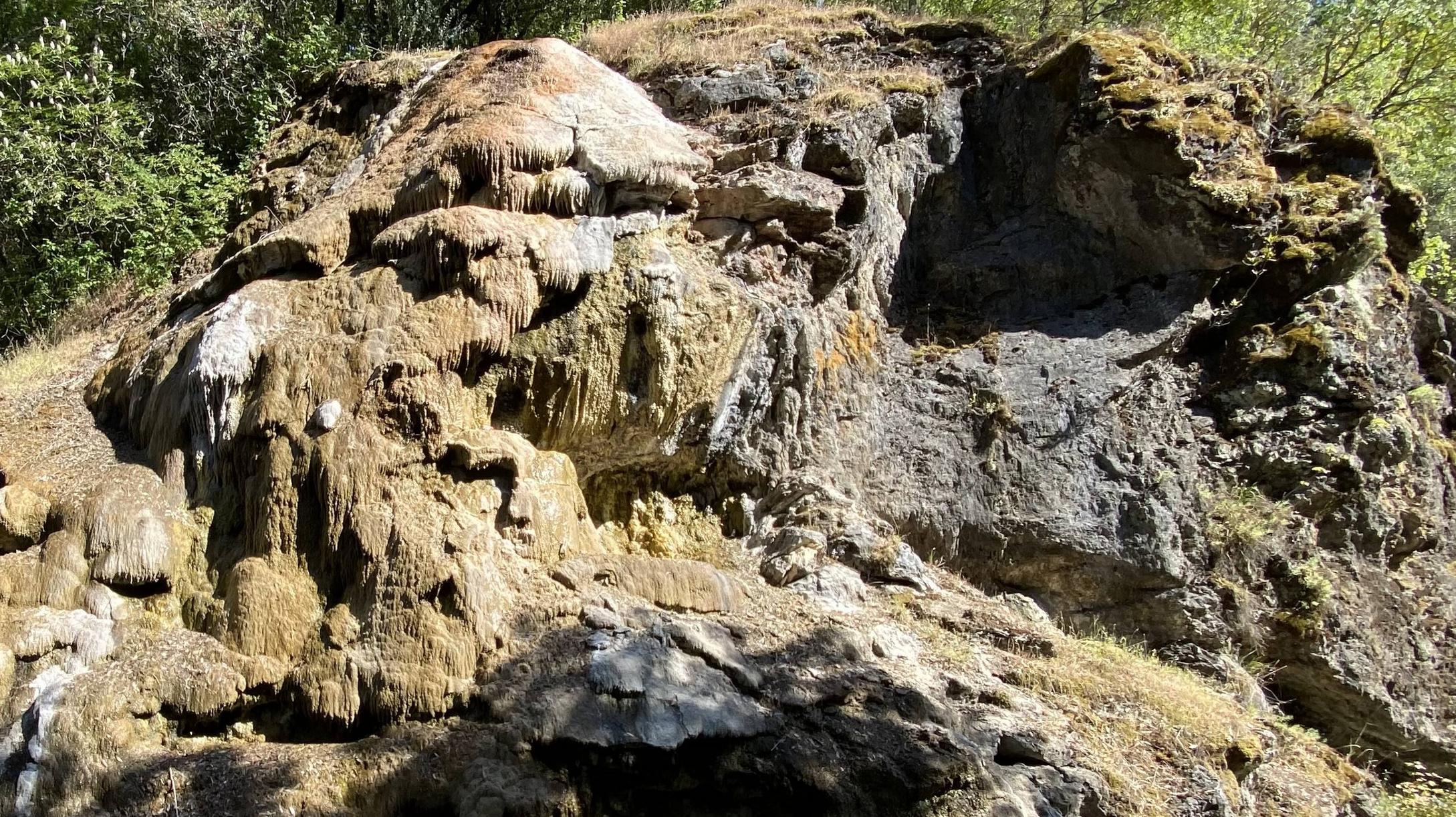 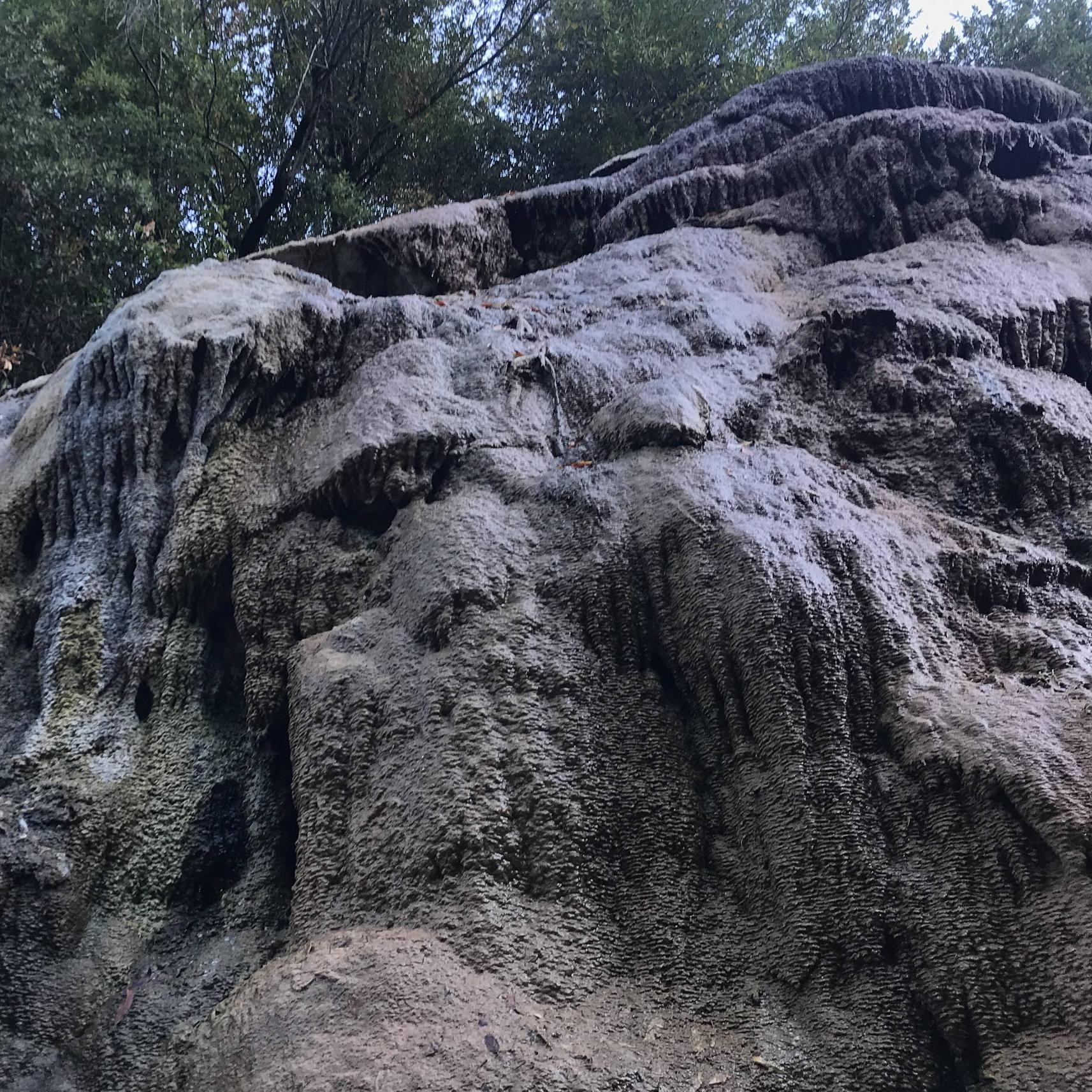 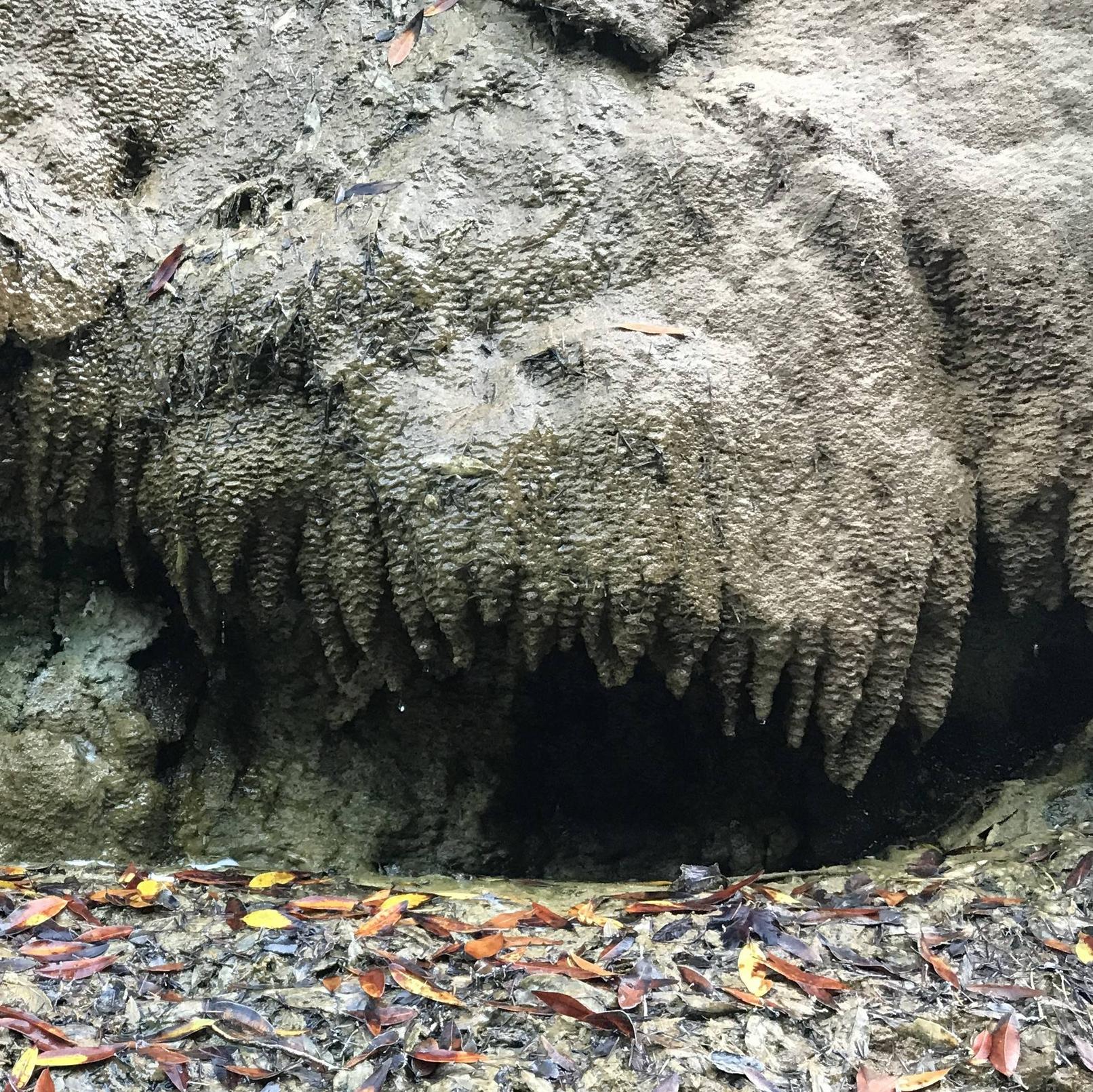 This is right off the road; you can see other pictures here on Google Maps.

The rock surface usually has water dripping over it, even in the summer when nearby creeks are otherwise dry, and it's covered in rippled ridges that remind me of the inside of the few limestone caves I've visited. This spot is right at a bend in the road and has no markings indicating what it is.

My current guess - based on absolutely no expert knowledge at all - is that there's a spring at the top of the rock that's slowly dripping over the surface and slowly depositing calcium carbonate when it lands. The mountains here have a bunch of old limestone kilns (and an active cement plant, and at least one active quarry), so it seems at least somewhat plausible that rainwater is dissolving the minerals and depositing them here.

Any guesses as to what, geologically, is going on here? Is there a name for this sort of formation?

Update: Based on the comments that this looks like travertine, I climbed up to the top of the formation. I found a small cave carved into a rock just above it that had a steady drip of water coming down. The water was cold and clearly had a bunch of red minerals dissolved in it. (Sorry about the quality - it was getting dark) 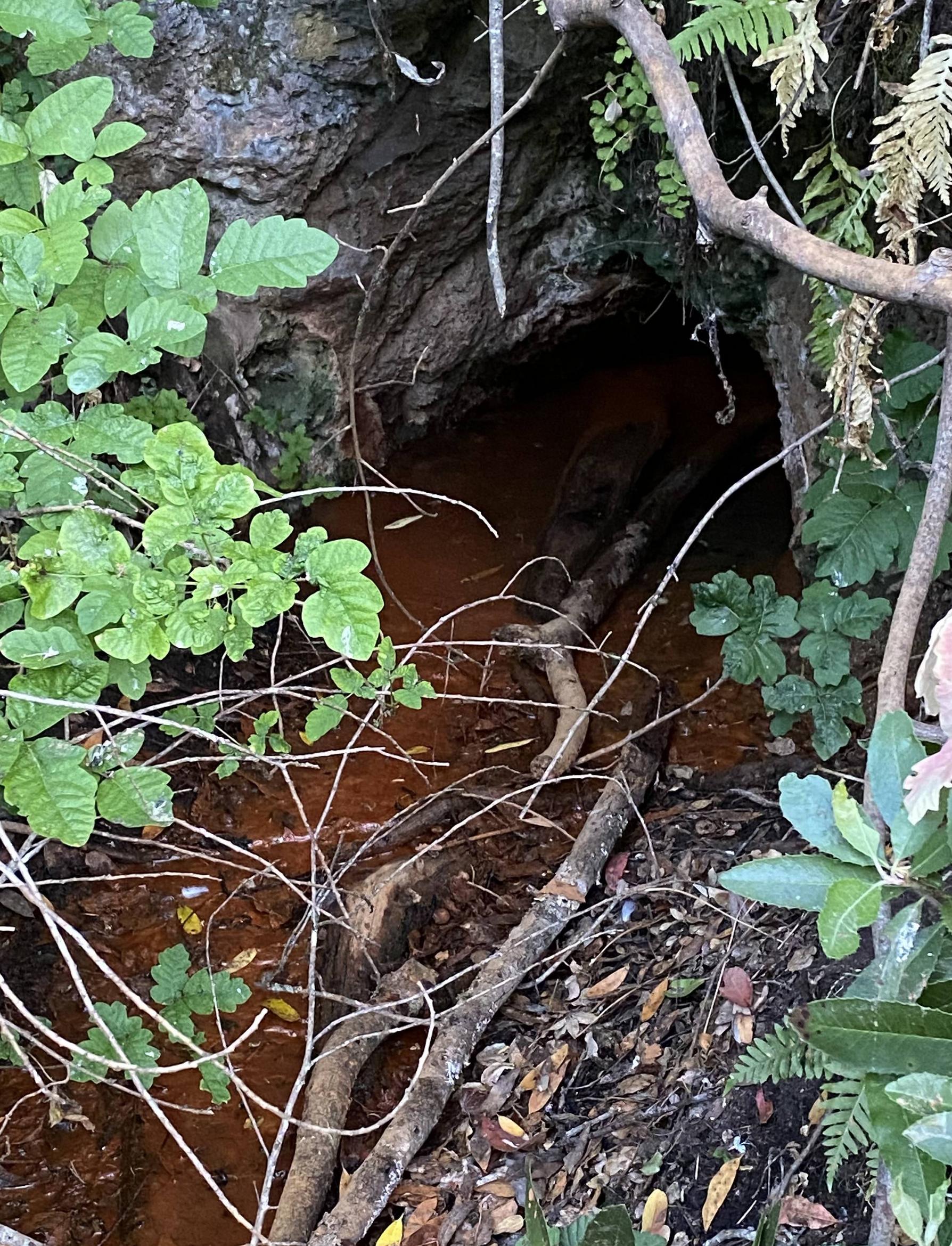 There was a clear path the water from there was taking that produced the drip over the surface: 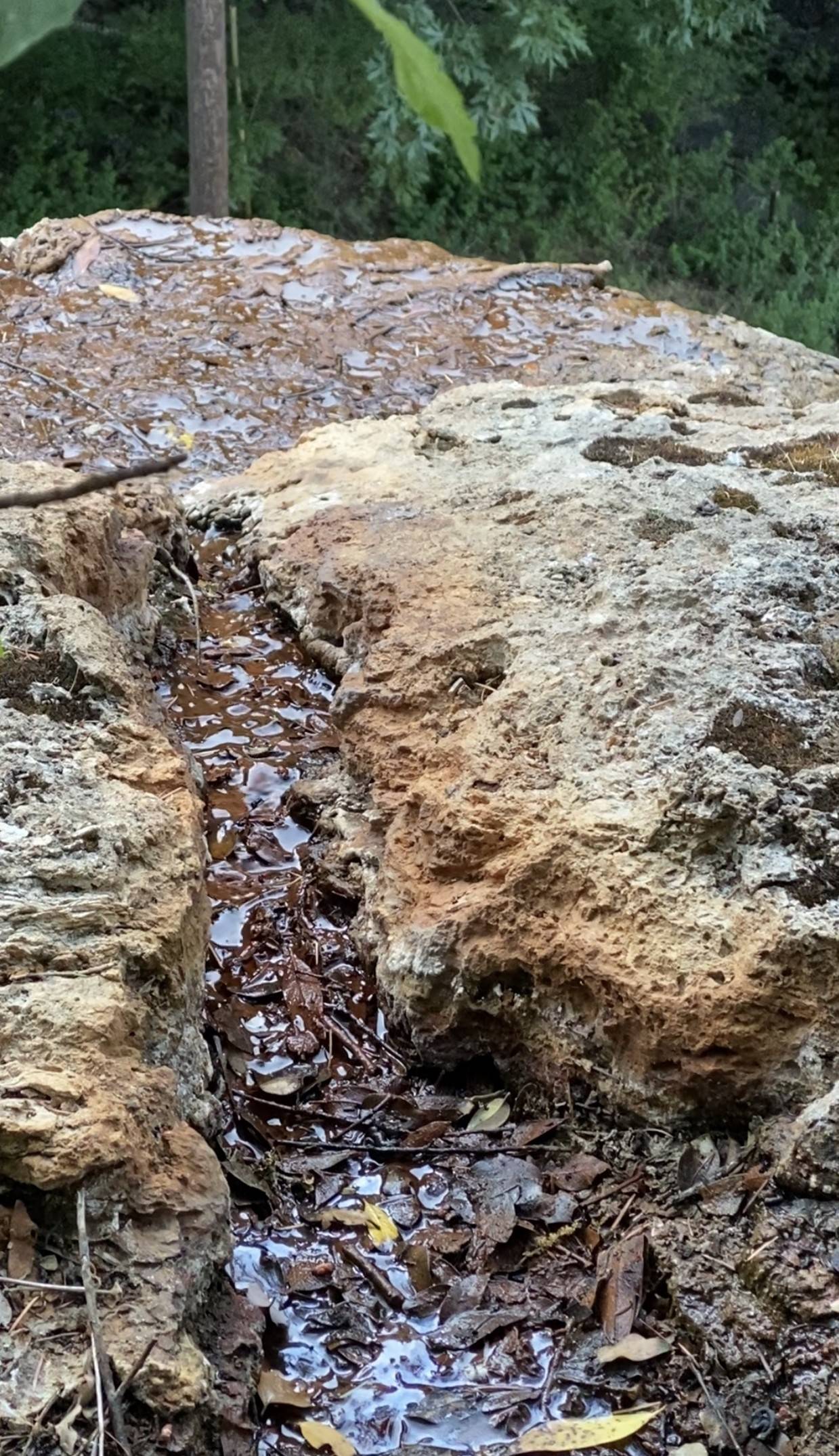 And finally, I noticed some largish rocks pushed off to the side of the road. They look like this: 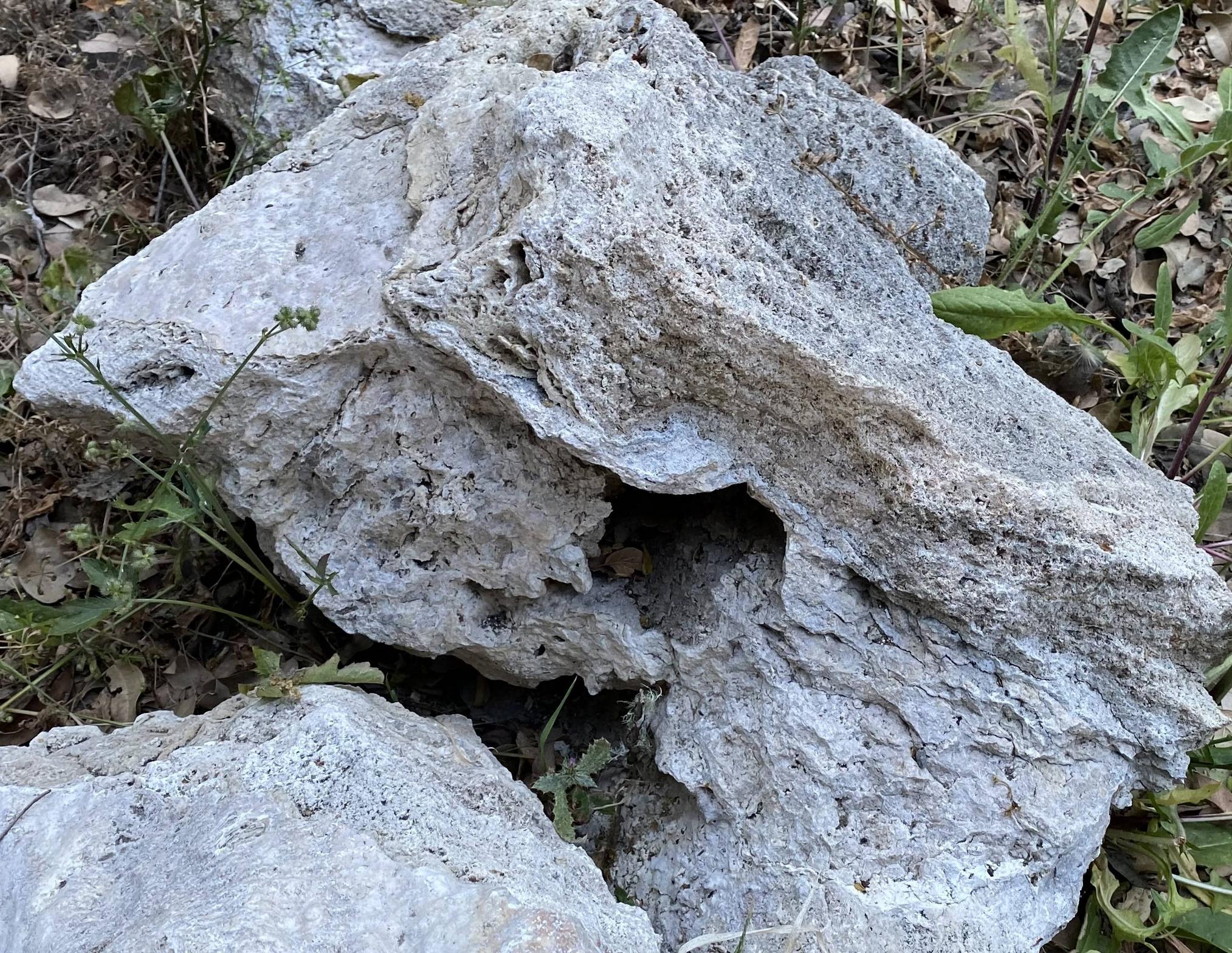 So based on this, I'm going to make the educated guess that I'm looking at travertine that's deposited on the surface of the rock. I don't think there are any nearby hot springs, but maybe this is simply water flowing through the limestone in the rock above, dissolving the minerals, and slowly depositing them on the surface?

I see that questions of the form "identify this rock" are off-topic here, and I'm not sure if this counts. If so, let me know where else I should ask this.

Well given that travertine springs trail is right next door, in castle rocks state park I am going to guess travertine. Which is a calcium carbonate mineral deposited from geothermal springs, hot ground water brings up the dissolved travertine which is deposited as the hot water evaporates, but can also slowly be dissolved and redeposited by rain. Thy can form very quickly, on the span of years or decades. There are many travertine geothermal springs in the area. If you want more information try this link for a start.

32
Is it true that earthquakes are not felt in a cave?
7
In an Earth-like planet with no history of carbon-based life forms, would there be limestone?
1
Sink holes in drainage area
1
How can I identify "tough" (mixed) granites?
5
Do we know what the rigid mantle looks like?
1
Arabian Desert rock formation