How to determine how long ago a rock was broken?

I know that there are techniques that help scientists determine the age of a rock. But is it also possible to determine how long ago a rock was broken? For example, how could we date the formation of the fracture surface in the photograph below? 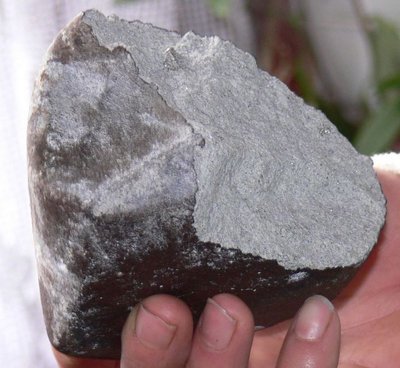 There is a technique called "Exposure Dating". Using e.g. cosmogenic nuclides (they are produced in the first metre or so of the surface of a rock which is exposed to cosmic rays, i.e. on the surface of the earth), it is possible to estimate the amount of time that the rock was exposed.

The specific sample is probably too small though. This technique is useful to date the retreat of glaciers (they shield cosmic rays from the underlying bedrock), fault scarps, or the time a meteorite spent flying in space from its parent body to the earth.

Not as far as I am aware. Any dating of the rock would determine the formation age of the rock (dating isn't quite as straight forward as that, and there is a whole science behind what each dating technique actually determines but for simplicity's sake we say it is the formation date) but the fracture plane,where the hand sample has broken away from the source rock, would not provide any distinct geochemical signatures that are different to the rest of the hand sample.

The only possible way you could very roughly estimate the age would be to compare the amount of mineral weathering on the fracture plane to that of the rest of the hand sample. Such minerals as K-feldspars weather to clays and comparing the amounts of clays of the fracture plane to else where on the sample you might be able to determine the relative age of the fracture plane (note: relative age is not the same as absolute age (http://en.wikipedia.org/wiki/Absolute_dating)), taking in to account the average rate of chemical weathering of the mineral, the amount of rain fall and other environmental conditions of the area that the sample was taken from. A possible way around this problem is if the outcrop that the sample was taken from had extensive fracturing you maybe able to find some fracture planes that contained mineral in-fill and dating those minerals you might be able to determine the age of the fractures.

This paper http://www.terrapub.co.jp/journals/GJ/pdf/4103/41030165.pdf outlines an attempt to date these minerals and also details some of the downfalls of the technique. But as I stated first of all, there is no technique I am aware of that will allow you to date the age the a piece of float became a piece of float.

Not the answer you're looking for? Browse other questions tagged geology geochronology or ask your own question.

11
How can scientists be confident of isotope ratios in past eras and varied locations, used for radiometric dating?
6
Maps and Faults
2
Was there once a glacier over Starcke national park in Queensland Australia?
4
How do we know how much Uranium was in any given sample when it was deposited?
5
Utah rock pattern identification - looks like small craters
3
How do we detect floods?
4
How did this hole / hollow form within this rock?