What data does a skilled meteorologist look at to predict thunderstorms?

An uneducated layman like me would just look at CAPE numbers and make rough guesses on possible thunderstorms. In a related but non-duplicate question, vertical wind shear is discussed.

If we are talking about predicting afternoon thunderstorms at or near a single location (8 hours ahead), what are the rules of thumb that skilled meteorologists follow to estimate the likelihood of the condition based on three possible sets of data:

For same day forecasting of afternoon thunderstorms, I'd start with the morning observations and the 12Z† model runs (I choose 12Z because that is the morning here in the Americas. For Europe you might be more interested in the 00Z or 06Z runs to start your day). In particular I'd start with the output of the 12Z GFS and NAM, and then give that some time to propagate into the RAP and finally the HRRR models which are initialized from each other starting with GFS.

At 12Z the morning soundings are going often going to have the remnants of a nocturnal inversion and the previous days boundary layer. Give cloud cover and surface temperature and moisture advection you can get a rough idea of how that boundary layer will evolve. An hour or two after 12Z the GFS and NAM will start coming in and you can look at forecast soundings and how the model thinks things will evolve. Around 15-17Z I'm looking at the HRRR for some additional guidance.

CAPE and wind shear only tell part of the story. 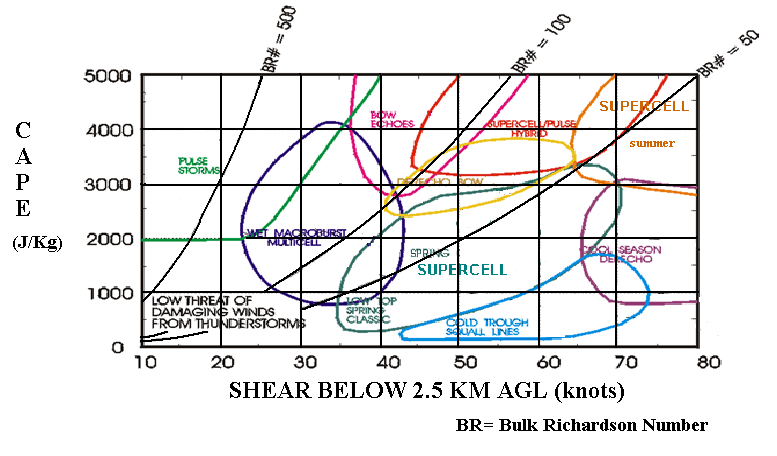 Image credits: Pierre_cb via Wikipedia. Licensed under GFDL 1.2+/CC-ASA 3.0U.

CAPE (convective available potential energy) is a measure of buoyancy and its opposite, CIN (convective inhibition) is a measure of the negative buoyancy a parcel must overcome to reach its level of free convection. You can have a lot of CAPE, but more than a little CIN can keep any thunderstorms from firing. If you have no CIN on the other hand but lots of CAPE you'll generally get a mess of storms everywhere but nothing organized. The bulk 0-6 km wind shear is a good predictor of the type of storms you can anticipate. Little shear tends toward air-mass thunderstorms while lots of shear tends toward supercell thunderstorms. In between these two are multi-cell thunderstorms. The shear will also influence whether multiple storms along a boundary stay discrete or build upscale into a linear feature (e.g. squall lines or QLCS).

What the above things tell you is whether the environment favors convection and what type of convection. It does not tell you if there will be a storm or not. You can have a perfect environment for storms, but unless something acts to initiate convection, you won't have a storm. Storms like to initiate along boundaries (cold fronts, dry lines, gust fronts, etc). You can also initiate with daytime thermal boundary layer convection eroding CIN until parcels can freely convect. Upper level divergence can also promote initiation by providing large scale ascent.

Putting this together, I'm looking at observations and model output to identify favorable storm environments. I'm also looking at them for features that promote initiation. As we near showtime, I'll also be looking at radar. On the radar I'm looking for evidence of convergence zones (radar fine lines, fronts, etc) to narrow down where I'd expect storms to fire.

† The Z suffix is shorthand for the historical Zulu time zone, which in modern times we call GMT or Greenwich Mean Time. All meteorological products are referenced to this time zone and this is done for simplicity. For example, no matter where you are on Earth, you know balloons are going to go up at 12Z and 00Z, and that the GFS will come out at 00,06,12 and 18Z. The conversion to local time exactly that as from GMT or UTC. For example 12Z on the east coast of the USA (in eastern daylight time, EDT, at the time of this writing) is GMT-0400, so 12Z - 4 = 08, or 8 AM EDT (and 7 AM EST the other half of the year).