Geomorphology of Mountains With Wind only Erosion

On a "snowball" world, the planet is earth sized and retains water but it lies outside its sun's "goldilocks zone" and is to cold for liquid water. Ocean's freeze over to a deep of several kilometers with only deep pockets kept liquid by concentrated minerals and vulcanism.

With no liquid water there will be no liquid erosion and no ice fracturing. The only moisture at all in the air will come from sublimation so very little ice will be deposited at altitude and it likely won't form glaciers or otherwise contribute to erosion.

At lower altitudes, very slow moving glaciers will probably perform most erosion but at altitude it will be erosion from wind carrying water and CO2 crystals as an abrasive.

In dry areas on Earth erosion creates rounded, fluid structures like stones shaped by a stream. But I am unclear of how much that is a feature of wind erosion and how much a feature of softer sedimentary stones. It looks like Mars, where erosion is primarily wind driven, does have more rounded and less jagged mountains than on Earth but I don't know about the suspected composition of the those mountains.

If granite wears from the wind, does it round off or does it's internal structure cause it to fracture even without water?

Thinking about it another way, if the Earth completely froze over, what would the Rockies, Andes or Himalayas look like after a few million years of wind only erosion?

You do have an earth analogue for this. The Namib Desert in Namibia has been a desert for the past 2 million years with very little precipitation. Also the Atacama Desert is hyperarid since more than 25 million years.

Mars is probably a planet that has below freezing temperatures for million of years, with only wind as an erosional process (apart of a few gravitative processes).

Granite is weathering in roundish forms, as it takes no clear direction from crystallisation. Usually the granite erodes in arid landscapes because of temperature changes and tiny differences in moisture and salts. In a completely frozen plant without a strong atmosphere you would probably still get round forms like Inselbergs. Furthermore there are of course different kind of forms of wind erosion resulting in strange looking shapes.

High mountain ranges on earth are always limited by erosion from water or glaciers (frozen water) in their growth, as there is more precipitation with altitude. To get sharp mountains you will need plate tectonics, which will result in the formation of an atmosphere and the release of heat and water (I assume the formation of an atmosphere since platetectonics are associated with volcanismn, which will lead to water and other chemicals like CO2 being released). Thus you will get erosion from water. If the plate tectonics stop and the atmosphere disappears, the mountains will stop growing and there is no moisture left for erosional processes. Then erosion by wind will be the primary geomophological process and the planet could look like Mars.

(I admit this is highly speculative, but the question is speculative in itself.)

What do mountains look like without precipitation? We have an excellent example here on Earth: in the Andes, between the latitudes of 17 and 30 degrees South. These mountains aren't granite, but they are a mix of igneous and meta-igneous rocks, which are similarly crystalline.

The eastern slopes of the mountains is moistened by water that evaporates in the Amazon Basin. The west side is the Atacama Desert. For example, the capital of Bolivia, La Paz, sits in the eastern foothills, and receives 500-600mm of rainfall per year. In contrast, the Chilean city of Arica - only 350km away - receives an average of 0.08mm.

Here's a Google Earth view of the Andes between Arica and La Paz with my pointer on the continental divide (which is not the highest point, as my line coincidentally runs over a summit in Bolivia). 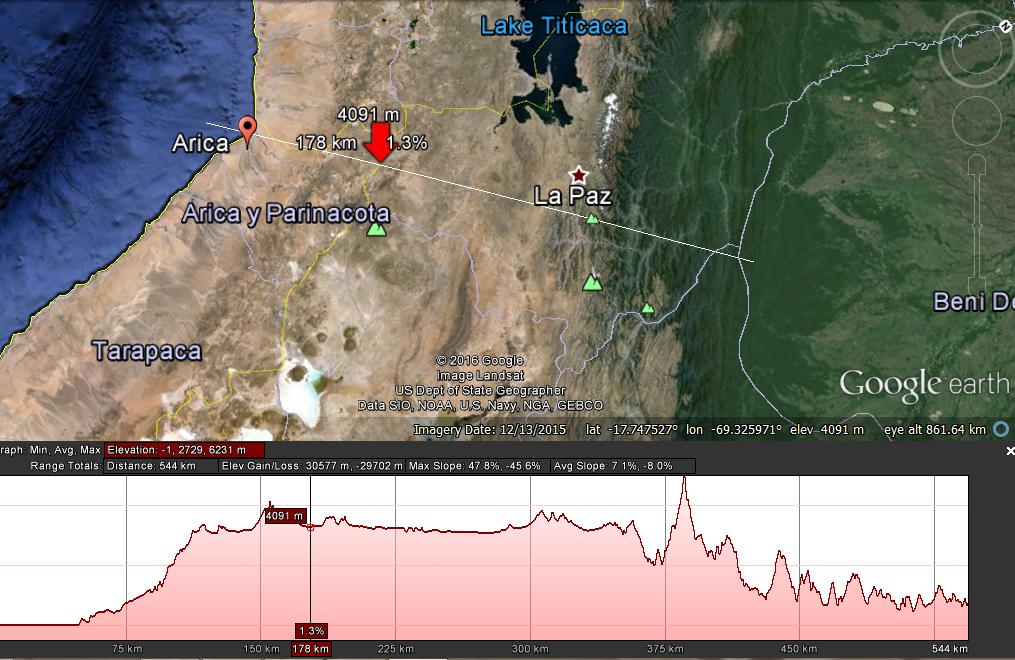 We can immediately zoom in on the effects of precipitation on the mountains.

The highest summits: No precipitation means no glaciation Fig. 1 is a close-up of two high Andean peaks which appeared in the photo above: the gorgeous, volcanic 6310m Parinaquta on the eastern slopes [Fig. a left], and the rugged 6350m Illimani on the west [Fig. a right].

Illmani has been deeply glaciated, as have most high summits around the world. Its flanks are cut by U-shaped valleys. Its summit is surrounded by steep glacial headwalls. When those headwalls retreat, the summit will collapse.

Parinaquta, in contrast, has clearly never held much ice (though a little snow still clings to the summit - nowhere on Earth is entirely dry). The dominant texture on the mountain is not caused by glacial valleys, but by individual lava flows. The mountain has good radial symmetry, like volcanoes on Mars. It will continue to grow for a long time yet. 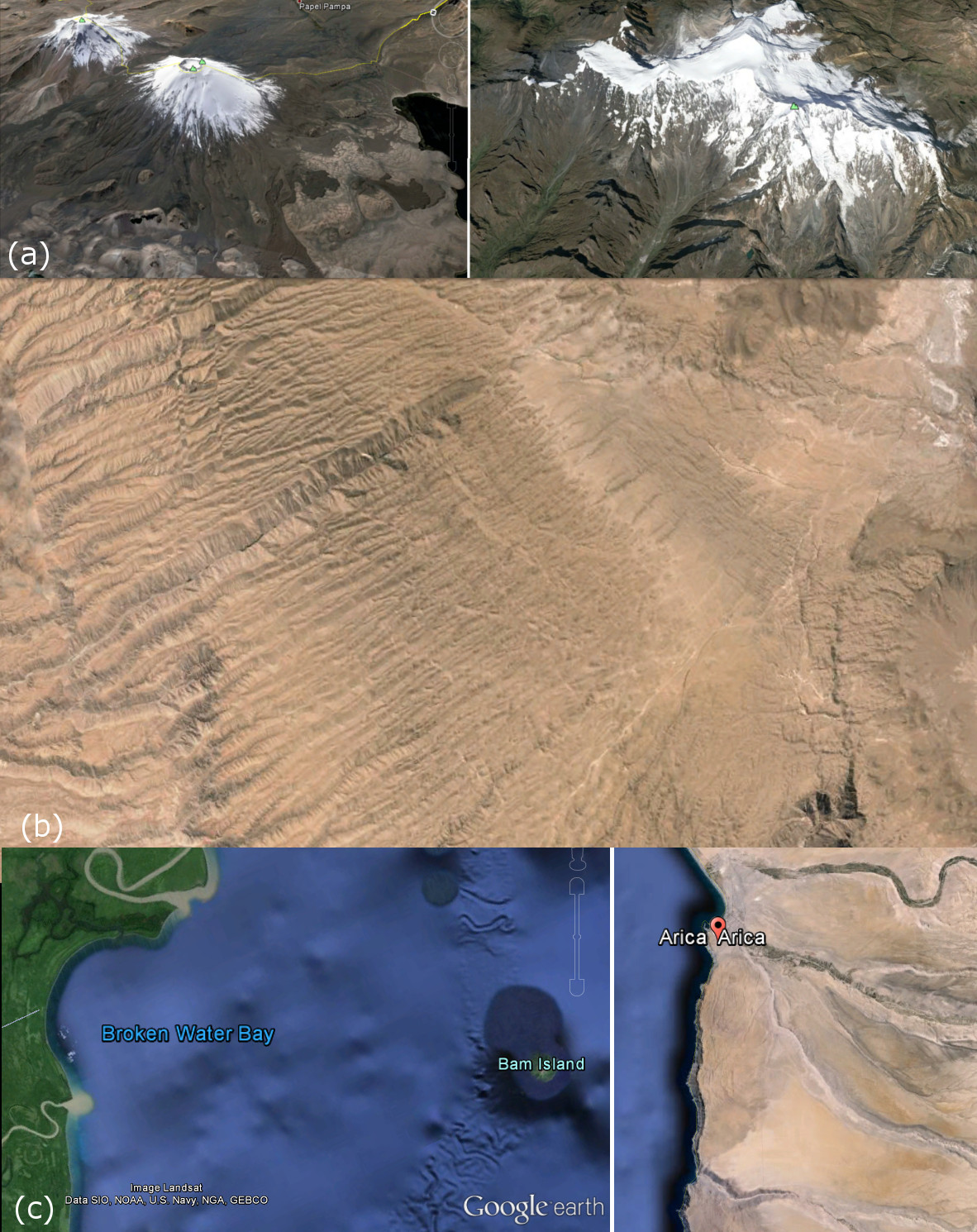 Middle elevations: strangely straight channels Let's take a look at the dry side of the Andes at lower elevations. Fig. b shows a 30-km area located halfway between Parinaquta and Arica.

These channels are quite unusually straight. No quantitative work has been done on these channels to the best of my knowledge (at least in the English scientific literature; Chilean geologists may have done much more).

Morgan et al. (2014) assert that these channels are formed by mud-rich flows. These wet flows are few and far between. The majority of the sediment is moved by air. The wind in the area flows preferentially through the channels, but - unlike the mudflows, or normal rivers - it is driven less by downhill-gradients than by large-scale weather gradients in the area. The wind flows straight, and it straightens the channels. [Morgan et al. also suggest that, during particularly dry periods, the wind may leave channels in inverted relief].

Coastlines: dry climates don't erode much Your question does not directly mention coastlines, but the dry Arica coast does have one relevant feature: the river mouths do not have noticeable deltas. The volume of a delta is a rough proxy for the rate at which sediment is removed from the mountains upstream and carried out to the ocean, minus the rate at which the ocean carries sediment away from the shore. This proxy has limited value, as it is greatly affected by ocean dynamics, the drainage area of the river, and the presence of a subduction zone near the shore.

Most wet coastlines with subduction zones (such as the coast of Papau New Guinea, Fig. c left) produce enough sediment to maintain estuaries, deltas, or little puffs of sand. In contrast, the rivers near Arica hardly change the shape of the Chilean coastline (Fig. c right).

We can predict that a reduction in total precipitation on the Earth would drastically reduce the average erosion rate on land.

Earth, unlike Mars, has active tectonics. Our volcanoes will never grow to the height of Olympus Mons because the continental plates shift beneath them. Yet our mountains now are beset by river incision and by glaciation. Their lifetime is short - perhaps half a billion years, no more, and usually far less. Wind erosion is ~one hundredth the speed of glacial and fluvial erosion. On Dry Earth, a mountain range might survive to be nearly the same age as the planet. If tectonics were to carry on at their usual rate, mountains would soon cover much of the Earth.

Sedimentary rocks would be rarer, and made of baked dust rather than river cobbles or mud. Needles of salt might grow on the plains, if there was enough moisture for the air to carry them.

I imagine Dry Earth as a towering desert, where the lowlands are walled in by the broken remnants of billion-year-old mountain chains, and the dust is made from dark volcanic rock.

Not the answer you're looking for? Browse other questions tagged planetary-science geomorphology or ask your own question.

13
Are there any photographs of mountains without significant erosion (on Earth or otherwise)
10
What is the age of the Gamburtsev Mountains?
6
When does an island with isthmus become a peninsula?
5
What causes jagged appearance of mountains in SE Asia?
8
How did the Ural mountains form?
5
Why are the mountains predominately grey or dark brown?
1
What is the erosion rate of mountains?
8
Similarities and differences between lava flows and fluvial geomorphology (rivers)
5
How does one get a steep-sided stratovolcano with extremely fluid, low-viscosity lava?