Why is the tidal range at the entrance to the bay of fundy so high?

As far as i understand, the northeastern part of the Gulf of Maine, also called the Bay of Fundy, is the only resonant part of the whole body of water in the Gulf of Maine (which means its natural period is very close to that of the M2 tide component). Therefore, it's logical to assume that the water level at its entrance is fixed to the Atlantic ocean water level, while the tidal range rises higher and higher as we go more and more into the bay; the water level inside the bay is a standing wave with a fixed end at its entrance and a free end at the coasts of its narrow part (this model is called "open harbour"). This description of the situation seems to fit all discussions of tidal resonance phenomenas that i found up to now. 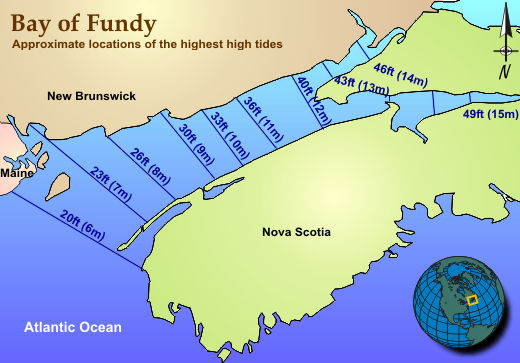 reveals that already at the entrance to the bay, the tidal range is about $5-6\text{m}$.

Therefore, my questions are:

The Bay of Fundy is shaped like a funnel, which amplifies the tidal magnitude, as the water is "squashed" into the bay. There are several other funnel-shaped bays with a large tidal amplitude around the world, e.g. Bristol Channel in Wales, UK.

11
What tidal databases are available to be used as model boundary conditions?
5
Definitions of tidal harmonic constituents...?
6
Why do high tides vary month to month?
11
Why do high tides occur simultaneously on opposite sides of the Earth?
1
Why does the ocean seem much cleaner than the bay I live near
7
Tidal flow in an estuary
12
Is Hudson Bay part of the Arctic or the Atlantic Ocean?
15
Why is the sea salinity high in the Mediterannean and Red Sea and low in Indonesia and Malaysia?