Some context: I row every morning, and due to my rowing club's proximity to a large lake, it is often very windy and rough (which builds character, according to the coaches). I noticed that as we row under bridges, the water seems to "speed up" and the waves grow in height. A similar effect is noted near the breakwaters close to shore, where an area of rough and fast waters seems to be created.

I'm not sure if this is fitting in the Earth Science SE, or if this is too broad or elementary, but I would like to know what causes this!

EDIT: The bridge in question has two rows of three pillars (similar to the below image, except closer together and made of steel) parallel to each other, we pass between the opening. 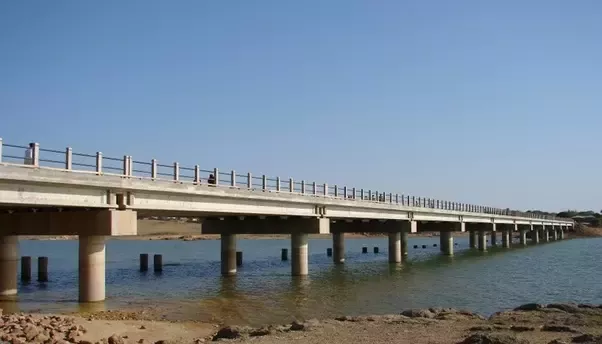 Water velocity increasing near bridge pylons is literally the Bernoulli principle manifested. Mass balance on either side of a constriction requires that flow speed up within the constriction itself.

Additionally, since nothing confines water at the surface, it is free to rise (and fall as shear stresses dictate), creating local waves...hence fast moving rough water in narrow channels, under bridges, around jetties, and even over sand bars.

Not the answer you're looking for? Browse other questions tagged oceanography waves or ask your own question.

13
Where can I obtain ocean wave data of the Southeast Asian region?
7
Is wave spectrum always positive and why?
8
The significance of peak period in surface wave models
4
What is the amplitude of the largest internal wave ever observed?
4
Differences between linear airy wave theory and Stokes' 5 wave theory? and it's application
1
Where can I find wave height/period, current velocity and wind speed/direction data at the Qiangzhou strait in China?
1
wave speed is smaller than both horizontal wave speed and vertical wave speed?
1
What would be the phase shift and polarity of a seismic wave upon reflection
6
Wave height data for Indian east coast