Ways to make a "How hard is it raining?" detector for personal use?

Is there a consensus on the "heaviness" of rain? and Relationship between Probability of Precipitation and Predicted Amount of Rain remind me of a gedankenexperiment of mine. I like to imagine a home project Arduino or Raspberry Pi-based weather monitor that lets me know the precipitation situation outside.

The "state of the art" for electronic hobbyists is the interdigitated electrode sensor, which is the way it is because it's easy to mass produce cheaply as a printed circuit board, not because it's a good idea.

Source: Last Minute Engineers' How Rain Sensor Works and Interface it with Arduino

This resistance is inversely proportional to the amount of water:

The sensor produces an output voltage according to the resistance, which by measuring we can determine whether it’s raining or not.

Earth scientists, amateur and professionals alike will tear out their hair since 1) a puddle may tell you if it has rained, but not if it's raining and 2) conductivity of rainwater varies dramatically, so conductivity is will not correlate directly to amount or area covered.

Question: What are ways to make a "How hard is it raining?" detector for personal use?

I'm thinking of a laser pointers, photodiodes, rainproofed PiCamera modules, microphones, level sensors, but the sky's the limit. What needs to be addressed is how "rained on" I'm going to feel when I go outside, and a static puddle detector is not going to do that very well.

If you're open to a more mechanical solution, I'd suggest building a "tipping bucket rain gauge", best explained by a picture (source: https://www.researchgate.net/figure/Sideview-of-tipping-bucket-Rain-Gauge_fig4_304297354):

This should be relatively easy to build and it's trivial to read this electronically by detecting the time it takes to tip. It seems like this is also the way that "real" weather stations measure rainfall. This is what a professional unit of this kind looks like: https://www.hyquestsolutions.de/products/hardware/meteorology/model-tb3-tipping-bucket-rain-gauge-1-1-1-1-1-1-1-1-1-1-1-1-1

Upon reading the question my first thought was, please define what is meant by "how hard is it raining?".

My initial tangent thought was "what about the impact energy of the rain" - heavy rain can be felt. Anyone who has heard rain fall on a metal or poly-carbonate roof will know the difference in noise produced by light and heavy rain.

Back to your proposed electronic rain intensity device. I think the "resistance plate" type of sensor might be using the wrong type of sensor. One of the problems I see with such a sensor is once it is totally or mostly inundated with water how does one determine rainfall intensity when additional raindrops don't affect the inundation level and hence the electrical resistance produced by the sensor?

A digital accelerometer or pressure sensor connected to a system that can record the impact pressure and the time of impact would be a better system.

A simple analog device would be placing a microphone to the underside of a piece of sheet metal and connecting the output from the microphone to a sound meter - the louder the sound, the heavier the rain.

Using a horizontal laser beam with a light receptor or a doorway beam, as used in shops or restaurants, etc., could also be used where the rain intensity would interfere with the amount of light received by the light sensor. One of the situations where such a device would not work would be during fog.

One way to do that is to estimate how much water is changing. If you can ignore the spill over, then that is approximately how much the puddle is changing.

Another idea you can use is to measure the changing weight of a rain gauge (that will need to be emptied daily, unless you can rig something that will do that for you). The faster the weight increases, the heavier it is raining. Even though it may cause a measurement problem, I would say a wider gauge will accumulate more weight, and you would just have to do some math with the density of water and the translation to a standard rain gauge for proper display.

I would approach this by counting pings on a plate with an attached piezo or microphone. The amplitude of the ping will give the volume of the drop and the number of pings the drop quantity. This is a more robust real-world interface than an electrode sensor.

A 'video disdrometer' is a device for characterizing raindrop size distributions. Professional versions (e.g A 1D distrometer) can use a video camera to image the shadow cast by water droplets moving in front of a bright light. So one DIY approach might be a camera imaging rain drops falling through a gap.

Delft university have put up an instructable for an audio distrometer, although their version lacks the signal processing required for quantitative measurements.

Both these approaches would probably need access to a tipping bucket rain gauge to calibrate intensities (and maybe a hosepipe to simulate the rain!)

I sort of accidentally did this in one of my projects in a complicated, backhanded sort of way.

I installed 16 soil moisture sensors in my yard as part of an attempt to track the distribution of water in the soil of a flower garden.

The sensors are battery powered. They transmit their data via Bluetooth Low Energy to a couple of WiFi enabled control nodes in the yard. From the control nodes, the data are collected in a database on a Raspberry Pi. Besides the standard data from the sensors (soil moisture, temperature, illumination, conductivity of the soil, and battery state of the sensor,) the control nodes also report how many attempts they had to make when reading the data from each sensor.

I used the "read attempts" data to assign sensors to control nodes so as to reduce the read tries. This makes the data collection more reliable and also reduces the power drawn from the CR2032 coin cells in the sensors.

What I found on reviewing the data from a couple of months was that the read attempts would rise before the soil moisture readings when it started raining.

The rain attenuates the Bluetooth signal enough to corrupt the data packages. It can take several attempts to read a sensor while it is raining, even though the same sensor will be read flawlessly on the first try every time when it is not raining.

I could add more sensors placed further from the control nodes, then shorten the poll time from once an hour to every few minutes. With a little data processing, I could have an online "rainfall" page telling me how hard it is raining - or I could look out the window before I go outside.

This is what a typical "rainy day" looks like: 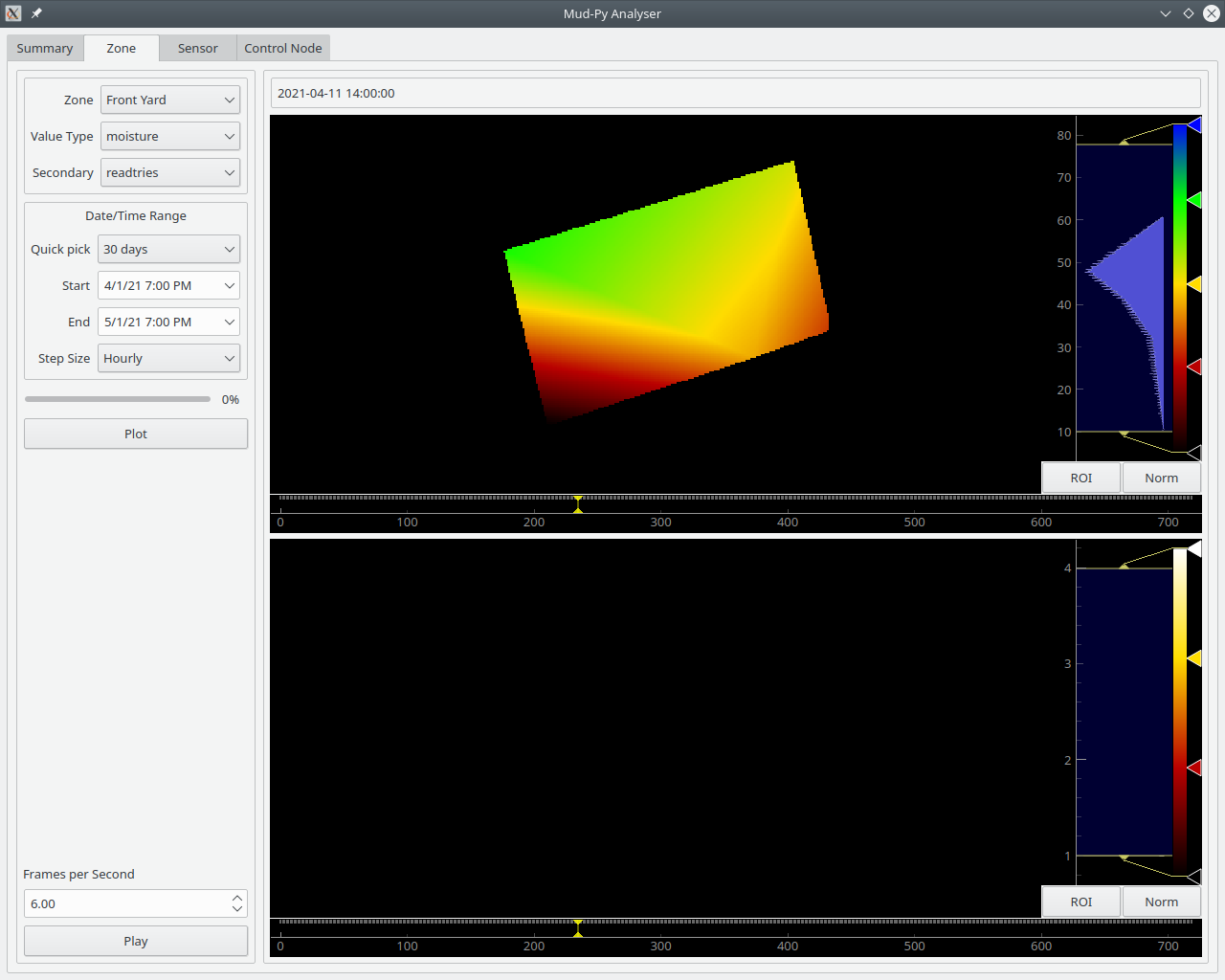 The soil moisture distribution is shown in the upper section. The lower section shows the read try count. Black is the normal "read on the first try" color. 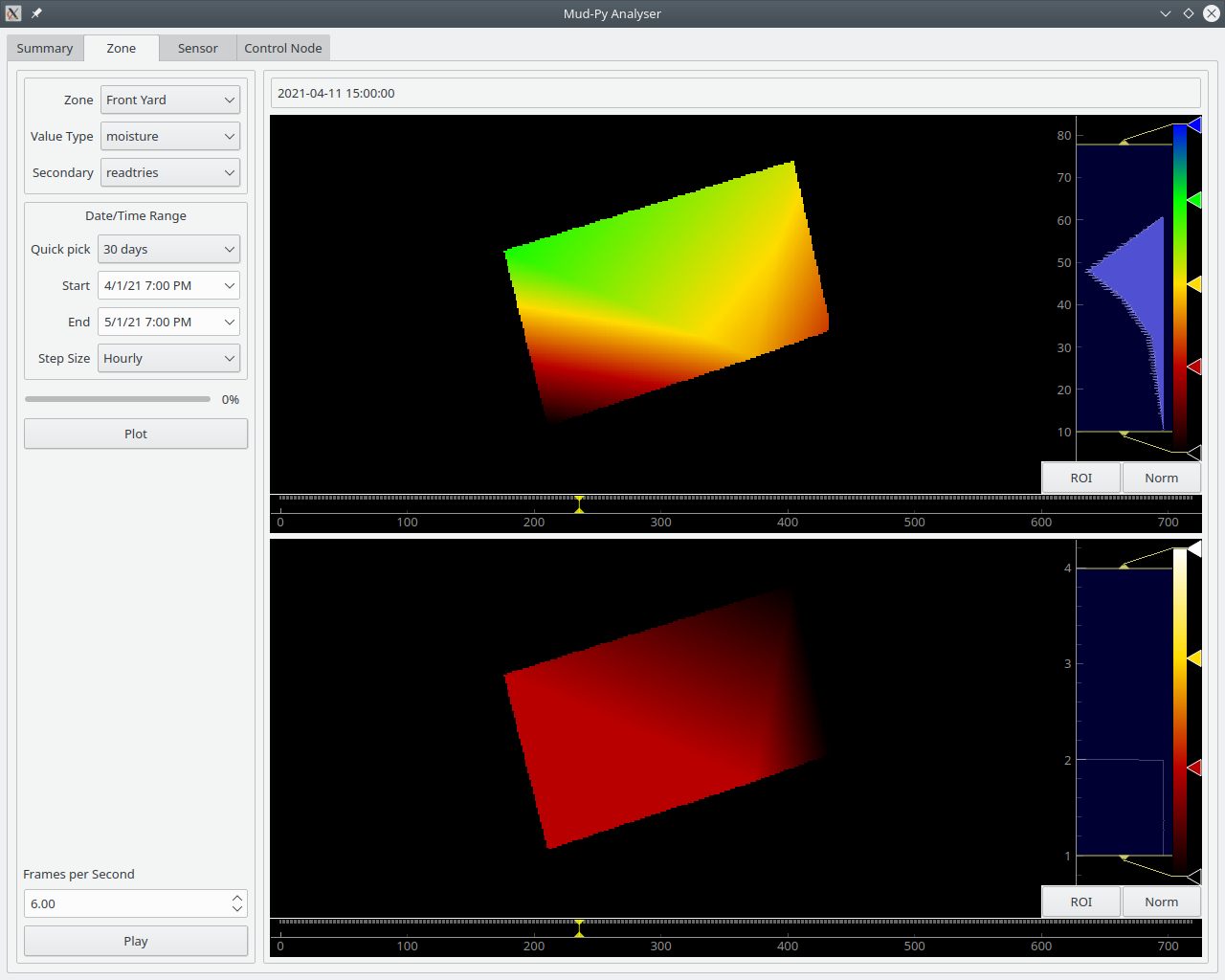 The read count has gone up on nearly all the sensors, but there hasn't been enough rain to make a difference in the soil moisture. 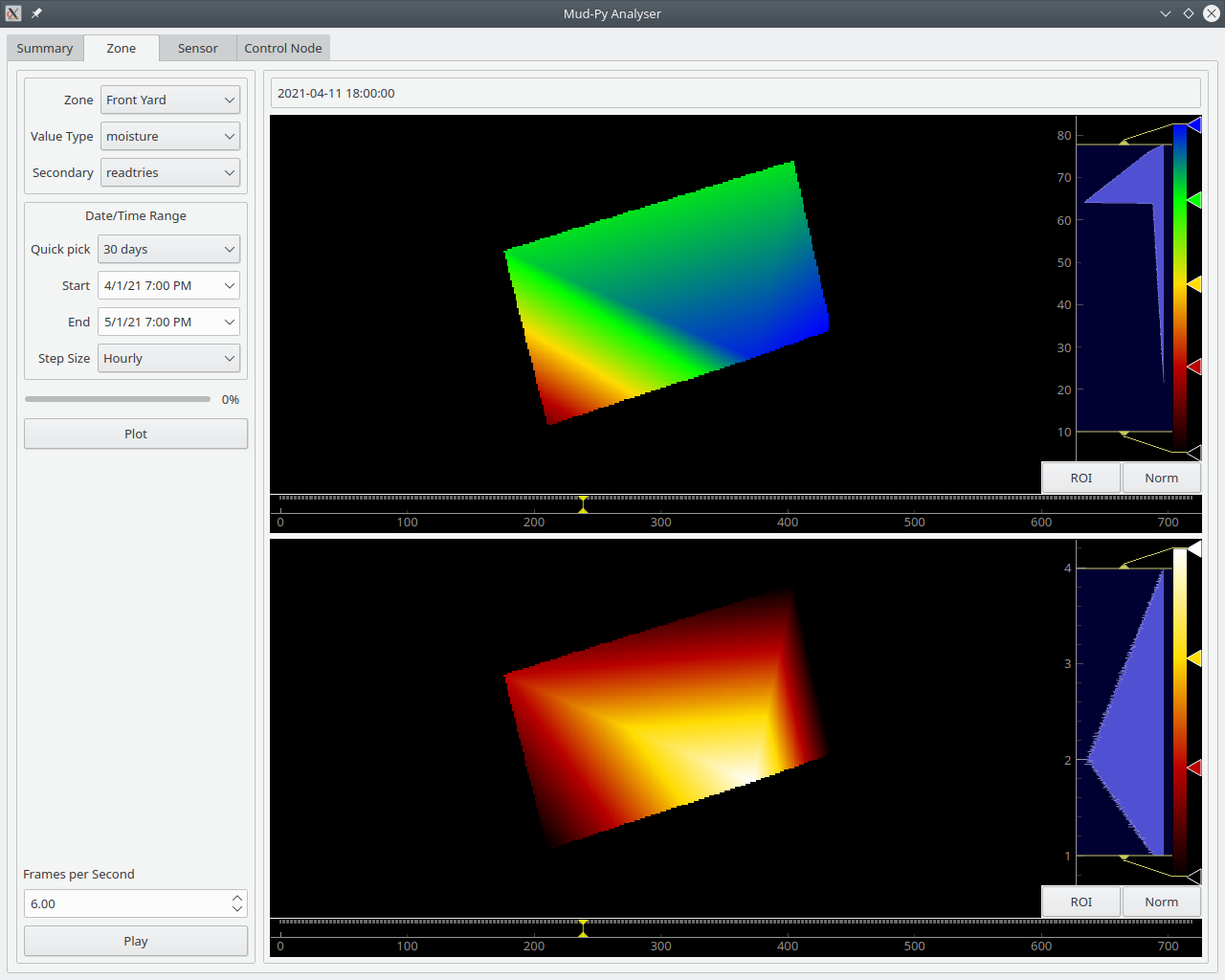 The soil moisture has gone up, and the read tries have gone up even more, indicating hard(er) rain. 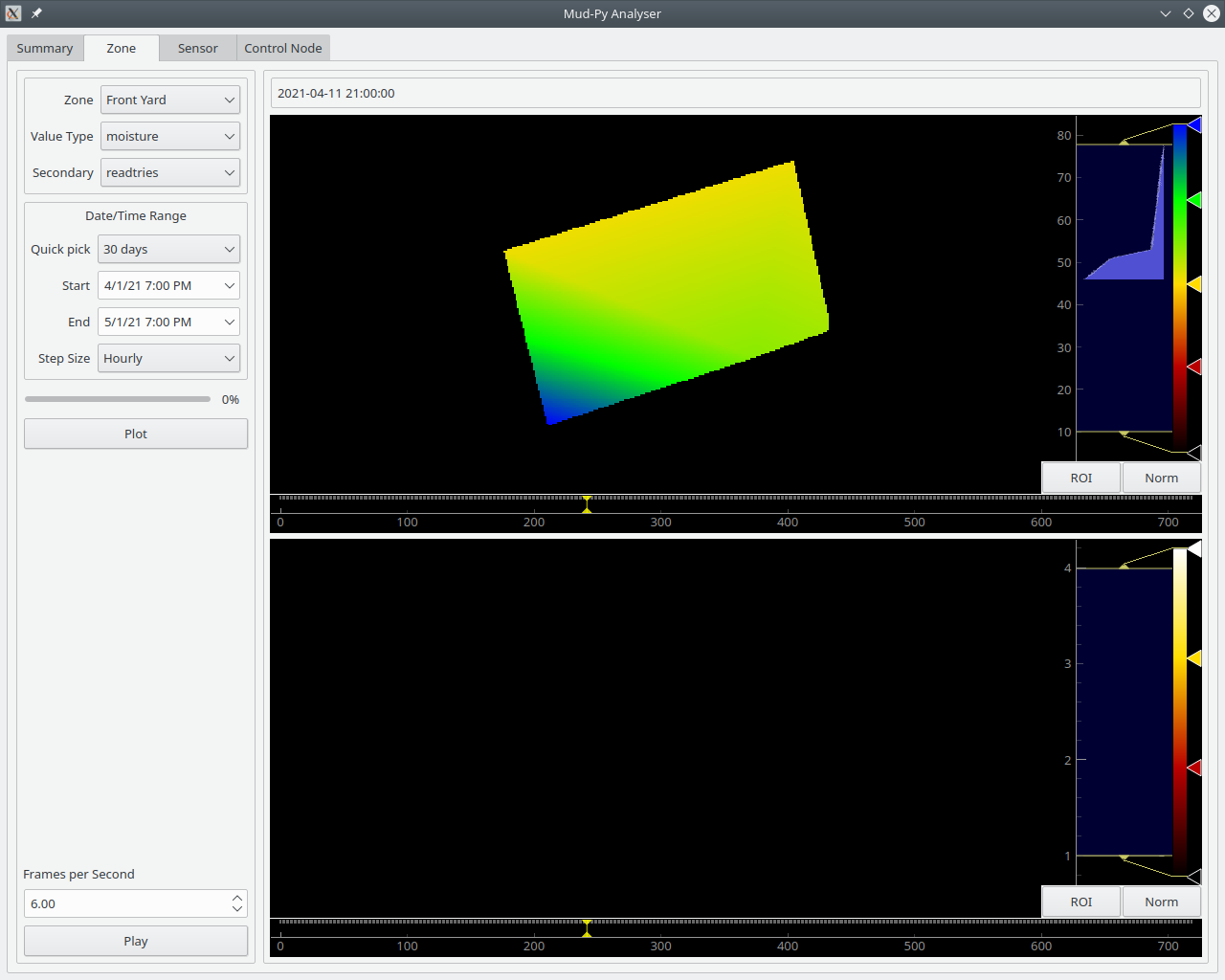 The soil moisture has gone up quite a bit compared to before the rain started. The read tries count has dropped back down to one for all sensors.

This kind of setup would be massive over kill just to tell if it is raining, but it is a nifty side effect of the setup if you already have it in place for other reasons.

I could use the received signal strength indication (RSSI) value, but I didn't write that function into the control node software. The Bluetooth library can probably supply the data, I just don't have the control nodes programmed to do it. Maybe I ought to change it...

As an alternative, you could use a WiFi sniffer to collect data about WiFi base stations around your house or appartment. I know from experience with my own phone that I can detect fewer of my neighbors' WiFi base stations on rainy days.

Track the data for all the WiFi base stations your sniffer can receive then apply some data processing and maybe some machine learning, and you could get a "how hard is it raining" indicator without installing any hardware outside your house.

You could connect a funnel to a water wheel. The faster it spins the higher intensity of the rain.

This sensor was selected randomly, as should not be consider something I specifically endorse.

Not the answer you're looking for? Browse other questions tagged meteorology rainfall rain instrumentation environmental-sensors or ask your own question.

3
Is there a consensus on the "heaviness" of rain?
5
What are typical ranges of rainfall drop sizes, speeds, and areal or volume densities?
5
What are those precipitation and water droplet characterization instruments called that they put on meteorological aircraft? How do they work?
3
Relationship between Probability of Precipitation and Predicted Amount of Rain

4
How effective is seeding rainclouds? What are the indications for initiating seeding?
1
How can we predict if it's raining, drizzling or there is snow fall by using precipitation intensity (inches/hour)?
2
Does cloud fraction of 0 for low clouds means it was raining?
2
Different atmospheric models available for personal usage?
3
Are there "transparent" clouds?
0
Can they still not predict rain even one week in advance?
0
Tipping bucket rain gauge measurement, normalizing