How exactly is cotton production linked to salinization of potable water?

The Aral Sea region has a problem with salinization of soils and drinking water, e.g. water coming from wells. As I understand it, it's caused by unsustainable cotton farming, but what is the exact mechanism? This publication says something about over-irrigation of soils and liberation of salts locked beneath soil surface, but because of the way the sentence is phrased ("The result is..."), I'm not sure it's what triggered it initially.

The result is that over-irrigated soils have accumulated excessive amounts of water capable of liberating salt locked deep beneath the soil surface.

the soil already contains salts, dry soils are especially prone to this as there is not enough water movement to move salts away. there are several ways the salt can get there, from slowly accumulating due to precipitation or from direct weathering of the minerals in or around the soil. leeching just drives it deep. Irrigation then remobilizes this salt bringing it to the surface, instead of staying in the deeper parts of soil. remember irrigation adds orders of magnitude more water to dry soils then they had before, completely changing how the soil behaves. 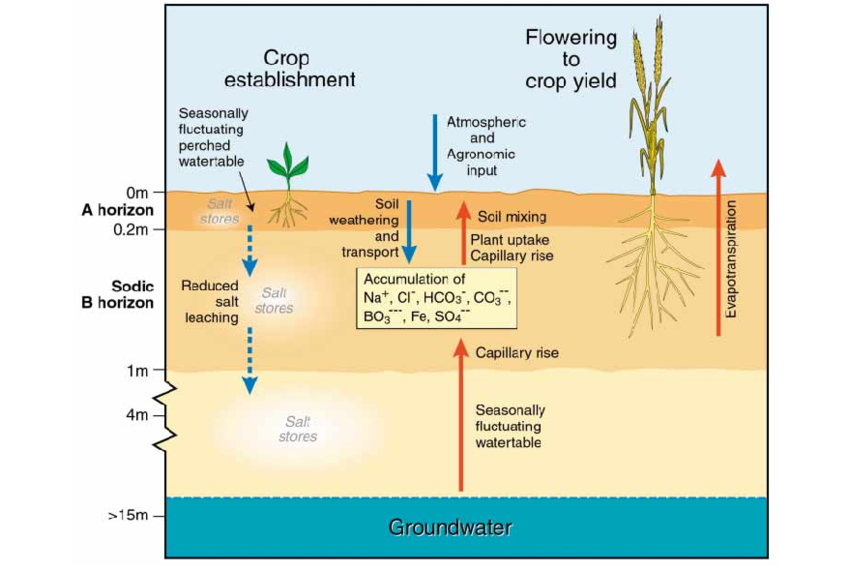 Not the answer you're looking for? Browse other questions tagged agriculture or ask your own question.

2
How much does the productivity of modern agriculture depend on Glyphosate?
0
How much excess water prevents planting of a crop
4
How can agricultural ammonia lead to PM2.5 production in the atmosphere?
5
How does agriculture release so much greenhouse gas?
12
How are hillsides farmed?