What is an "exquisitely rare pollen corona"? How can pollen produce several tight rainbow circles around the Sun, and why pollen specifically?

The Forrest Mims YouTube video An Exquisitely Rare Pollen Corona shows a pair of rings closely circled around the Sun with rainbow colors; blue on the inside.

The first annulus is easy to see, the second is faint so I've played with the color and contrast to bring out the red part to contrast with the blue sky.

Question: What is an "exquisitely rare pollen corona"? How can pollen produce several tight rainbow circles around the Sun, and why pollen specifically? 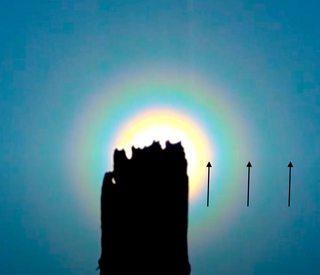 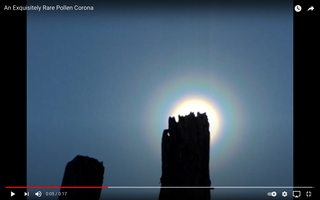 This is an interesting phenomenon that I haven't seen before. To start off with a discussion of coronas in general, they are fundamentally caused by diffraction, a form of optical scattering where the path of light from the sun is "bent" as it passes by the edge of a small particle. A simple illustration is case D in this example figure showing light scattering about a small cloud droplet:

The other interactions shown include reflection and refraction. For diffraction, when multiple interactions take place, the diffracted light produces interference patterns. A simple example is shown here for light being diffracted from two sides of a particle: 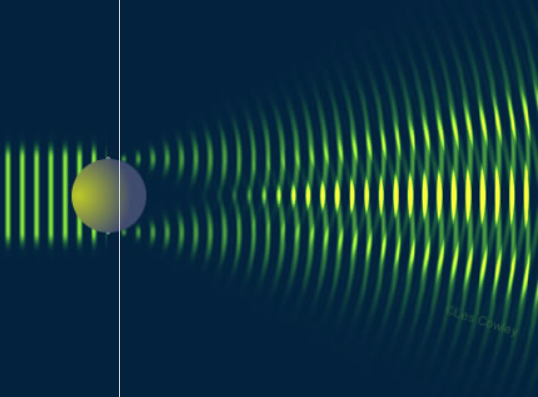 Ultimately, a corona is the result of a great many of these interactions taking place in the presence of a very large number of particles. However, as to pollen coronas in particular, it turns out that the type of particle largely doesn't matter - diffraction is such a major component compared to other optical scattering processes (e.g., reflection or refraction) that a corona may be formed whether the particles are liquid or solid: Corona formation, to a good approximation, needs no knowledge of the droplet interior because the surface scattered waves predominate. It could be water, ink or coal - the pattern is almost the same. It depends primarily on the droplet size, shape and the wavelength of the light.

Pollen, it turns out, sometimes happens to be in a similar size range to cloud droplets. With diameters ranging between 15 and 200 μm, smaller pollen particles can be of similar size as cloud droplets (~20 μm in diameter), allowing them to have similar diffraction properties. In the end, the main difference is that pollen are less uniformly shaped than cloud droplets; preferential orientation as they are suspended in the air can cause the resultant corona to become elongated vertically or have particular bright patches in some cases.

Not the answer you're looking for? Browse other questions tagged atmospheric-optics particulates or ask your own question.

6
What mechanism leads to these spectacular iridescent patterns in clouds labeled as a "Fire Rainbow"?

11
Fine particulate matter - Why the lack of attention? What can be done to tackle it?
16
Why do clouds sometimes form a ring around the Sun?
6
What mechanism leads to these spectacular iridescent patterns in clouds labeled as a "Fire Rainbow"?
3
What causes this arc in the night sky where the background is brighter on one side than the other?