In the atmospheric dynamics research community, many colleagues of mine happen to use atmospheric models that have non-hydrostatic equation solvers, e.g. the UK MetOffice model, and WRF-ARW:

The equation set for ARW is fully compressible, Eulerian and nonhydrostatic...

There are another group of models that use a hydrostatic solver by default (e.g. ECMWF), and presumably make the following assumption about the Earth's atmosphere.

My question is what are the applications of each type of solver, i.e. when would you chose to use a non-hydrostatic model over a hydrostatic one? (which is presumably less computationally expensive?)

This is a balance between the vertical pressure gradient force and gravity with no net acceleration. This tends to hold for atmospheric phenomena that are much wider than they are tall. On the synoptic scale where vertical motions are on the order of 1 cm s$^{-1}$ this holds, but in a thunderstorm where updrafts can attain speeds of 100 m s$^{-1}$ this approximation doesn't work.

A hydrostatic model uses the hydrostatic approximation in place of an equation for $w$, while a non-hydrostatic model uses the momentum equation for $w$. As the ECMWF page you link to suggests, models with low grid resolution can get by with the hydrostatic approximation. A model with dx=dy=10 km means the grid volume is 100 km$^{2}$ times whatever the vertical grid spacing is. The $w$ value for that grid box needs to be representative of the entire volume and you aren't going to explicitly resolve convection at this resolution (convection will be parameterized and in general a model can only resolve features that are about 4x bigger than the grid spacing).

This is my favorite example of the difference between a hydrostatic and a non-hydrostatic code.

The simulation depicts a lock exchange which you can picture as opening your window if you live in a cold place and it is winter. Inside your house, presumably, the air is warmer than the outside. So when you open the window, the cooler (heavier) air will descend and spill inside the house underneath the warm (lighter) air which will spill outside your house.

In this simulation there are two fluids with different densities initially separated by a vertical imaginary gate (lock) at the center of the domain which is "removed" when the simulation begins. The heavier (colder) fluid is on the right and moves to the left under the lighter (warmer) fluid.

Because the hydrostatic simulation does not use the momentum equation in the vertical direction, it is not able to capture features for which the horizontal and vertical length scales are on the same order of magnitude. In this example, despite the resolution being the same between (a) and (b), only the non-hydrostatic code is able to capture the Kelvin-Helmholtz billows. However, the hydrostatic code can also be valuable. In this case, it is 8 times faster and it captures the large scale features of the flow such as the bore speed and interface thickness. 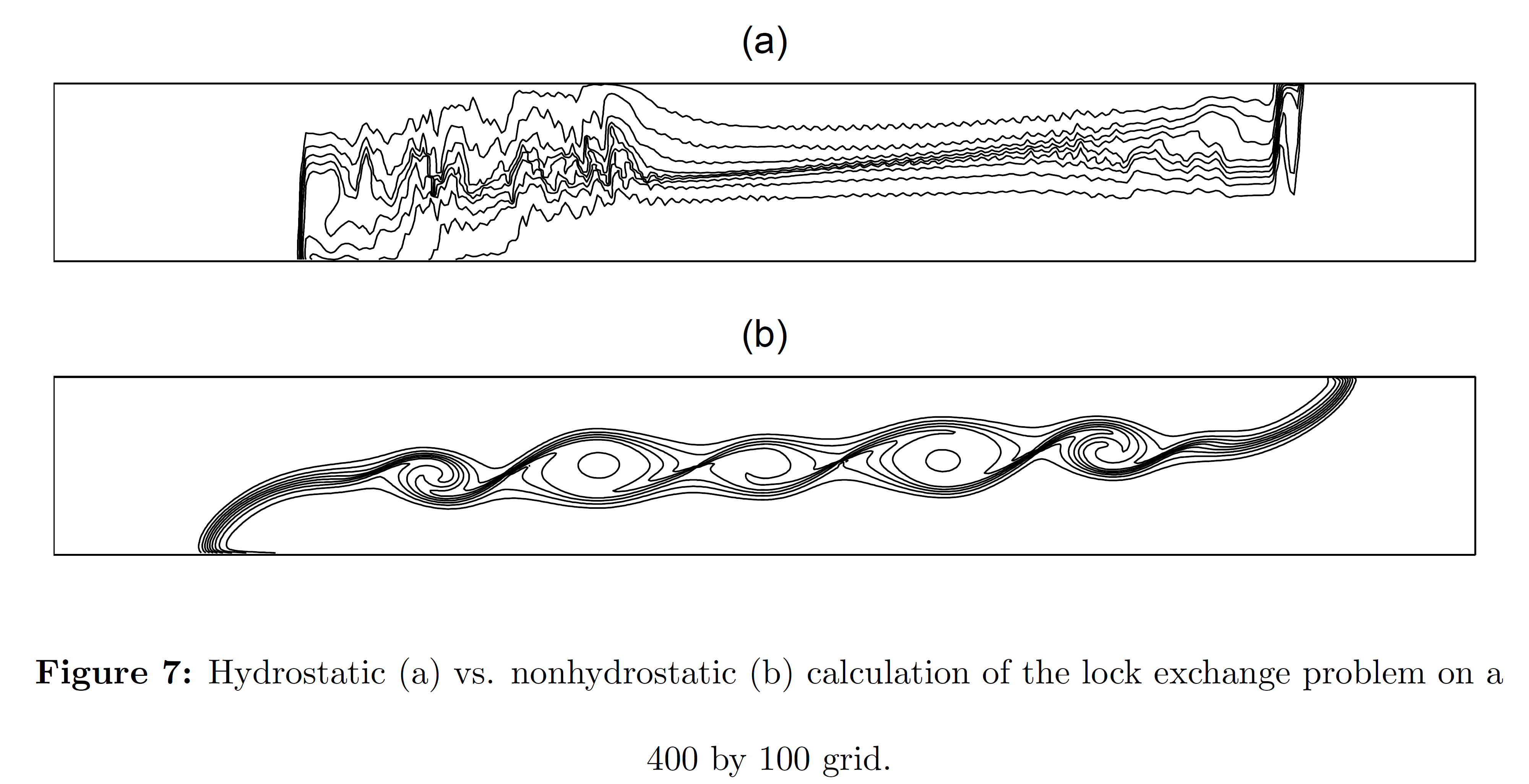 Not the answer you're looking for? Browse other questions tagged meteorology models nwp weather-forecasting numerical-modelling or ask your own question.