What is the pressure at the center of the Earth?

In the question Does gravity increase the closer to the core you get?, it was determined that gravity reduces to zero at the center of the Earth. That is logical.

And if there is no pressure, just weightless atoms, then could voids or bubbles form in the center of the Earth? And if a bubble did form, would its ‘skin’ not feel more gravity on the outward side of the bubble, thus inducing the void to grow?

And if such a hypothetical void did grow at the center of the Earth, at what size would it stabilize?

The maximum occurs at the point towards which gravity is directed in a spherical mass, which is the center. True, gravity at that point is zero, but it and therefore the pressure gradient have already been integrated over the whole radius (and mass) of the Earth. Instead of zero, the pressure at the center will be a maximum. 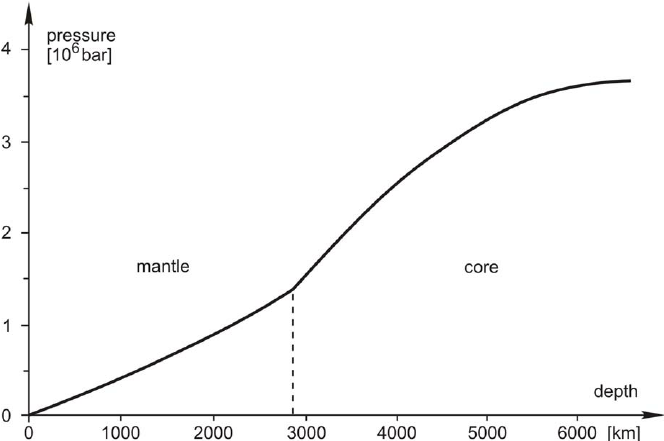 A couple additional features should be noted in the above plot. First, it was mentioned above that the pressure gradient is proportional to the local gravitational force. Actually it is proportional to force per unit volume, whereas gravity at any point is a certain amount of force per unit mass. So if there is an increase in density (more mass packed into the same volume), the gradient jumps. Thus is seen in the plot where the mantle meets the denser material in the core (rock --> iron).

Second, the maximum pressure noted above is 360 GPa. This is comparable to and maybe larger than the bulk modulus of the materials that make up the Earth; for instance Encyclopedia Britannica gives a bulk modulus of only 160 GPa for steel (an iron-based alloy) under ambient conditions. This means the pressure required to balance gravity deep inside Earth is sufficient to compress the material and make it more dense than it normally would be. In fact this compression causes Earth to become denser than Mercury, even though the latter is overwhelmingly iron. Mercury is smaller and less massive than Earth, so it cannot generate as much compression from its gravity.

The previous answers do a fine job already. But I'll try to add a simple thought experiment. Imagine three objects floating in space, clumping together by gravity:

Mass A, the negligible mass c and mass B, equal to A. The center is attracted to A and B and their gravity cancels out. However, A presses against c, because it is attracted by B, and B presses against c from the opposite direction. So of course, c will feel the pressure from both A and B, even though it feels no gravity.

As an analogy, think of a balloon. The pressure inside is higher than ambient because the elastic skin of the balloon pulls in everywhere on the surface. Pressure at the center of the balloon is higher, despite the fact that no force pulls inward on the center - the increased pressure comes from the outer shell of the balloon pulling inward. You can think of the earth in much the same way - even though there's no gravity acting at the center of the earth, any arbitrary "outer shell" experiences a gravitational force pulling down which contributes to the pressure below.

Imagine the whole ball being separated into a handful of concentric shells, with the outermost shell being the crust with the surface, and the lower shells ever deeper, hotter, and ghastly regions of the internals of our planet.

Now, just for the thought experiment, forget that each individual shell has "stuff" going on in itself, and just imagine it as a volume of whatever material (dirt, lava, etc.) there is.

The outermost shell then is acted on by gravity and pulled inwards/down. But that's all that gravity does. It does not create pressure on its own, at all! The pressure only occurs because the next layer resists the previous layer - or Earth would implode (which, incidentally, is what actually does happen in a supernova).

The principle is the same as if you heat water on the stove, in one of those pots with a screw-on lid. To create pressure, you need hot water, but you also need the lid resisting the water vapors trying to "get out". Remove either factor, and there is an open pot without any pressure.

Back to Earth: this phenomenon continues. As you noticed, the effect of gravity on each individual shell gets less and less (the shells weigh less, the farther you go down, even if you size them such that they have the same mass as the previous ones). But the downward force from all the upper layers is still there just fine - at this point, gravity has already done its work and it does not matter why the upper shells press down. All the matter there is already compressed as much as possible under the circumstances (of course not compressed as much as physically possible - our planet is much too small/light for that), so the forces from above are transmitted further down.

Obviously, in reality there aren't any well-defined shells and the effect on gravity works on all individual atoms making up Earth, but the principle remains. All that is on top presses down, and thus there is pressure at the very center, albeit there is no or very little gravity down there.

Not the answer you're looking for? Browse other questions tagged geology gravity mathematics pressure or ask your own question.

36
Does gravity increase the closer to the core you get?
6
Why is the density of Earth higher at the core

2
Hypothetically, what would happen to the earth if a large hole was drilled through the center?
41
Farthest point from the center of the Earth
6
Why do we measure eustatic sea-level from the center of earth?
1
How to predict when the pressure will change
0
How was the Earth's core made?
1
What is the relationship between air pressure and temperature?
2
Why does warmer maritime air create low pressure systems while continental land masses create high pressure systems?