Why is the deep sea cold?

Except near thermal vents, the deep ocean is generally considered to be quite cool. For instance, water temps in the Mariana Trench (~10 km deep) are 1-4 °C.

However, the geothermal gradient runs counter to that, where the lithosphere at the same 10km depth would be around 250-300 °C.

So, in a sense, water should be heated from beneath and only be able to release its energy into the atmosphere/space. Yet, we see the exact opposite of this, where the upper layers are the warmest.

Where did the thermal energy go? Is it the product of billions of years of ocean currents carrying the heat to the poles, or am I overlooking some other principle?

The simple answer to this question is that cold seawater is denser than warm seawater, so it sinks and fills up the abyssal ocean.

The water that fills up the abyssal ocean comes from the polar regions. Here's a 1990s plot of temperature in the Atlantic, retrieved from the WOCE Atlantic Ocean Atlas: 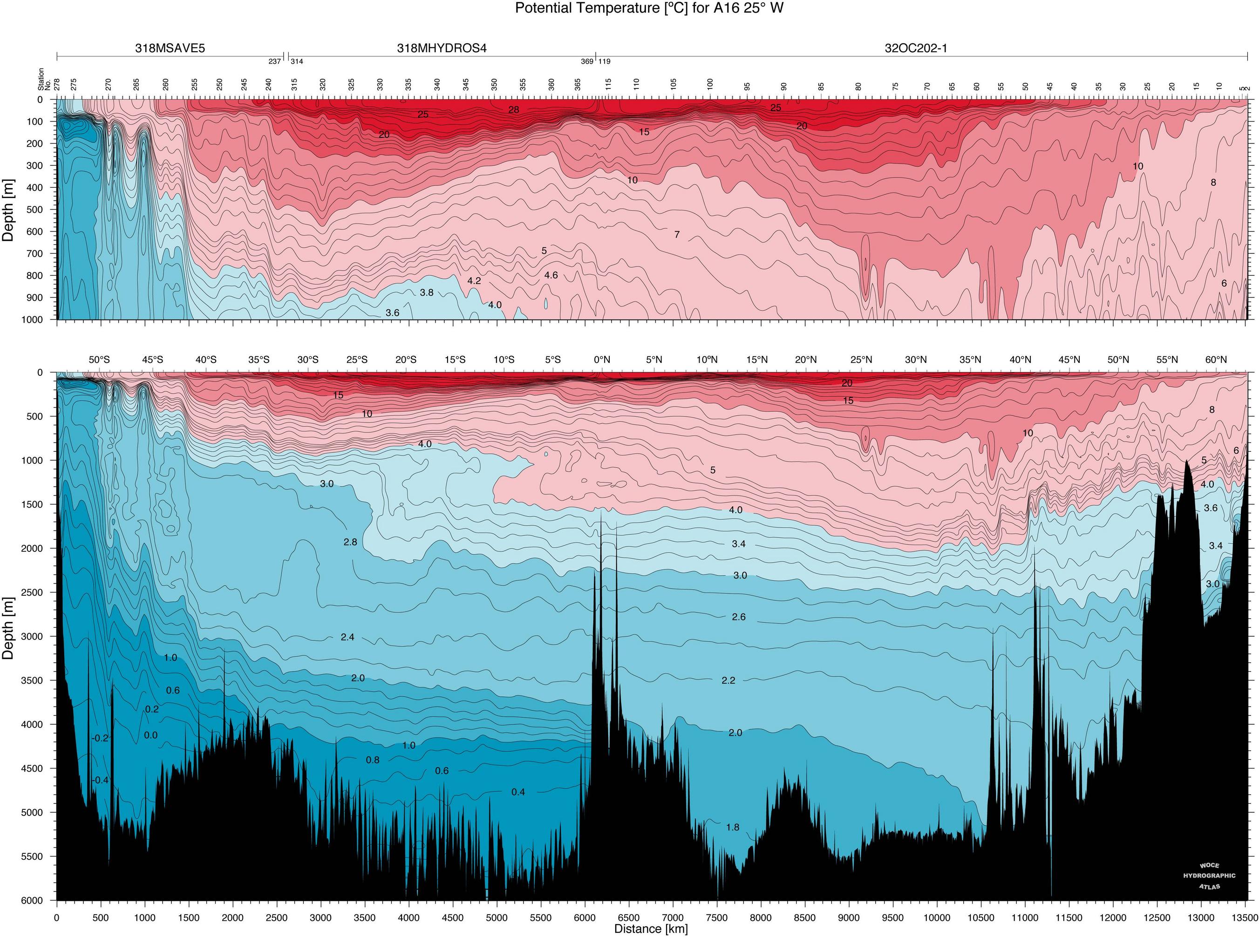 You can see that the coldest water is coming from the Antarctic region (dark blue stuff on the left hand side of the plot) and spreading north.

If you look at 1990s salinity instead (plotted below) you can see that the water from the Arctic isn't as cold, but is much saltier (yellow part of the plot spreading from the right hand side and sitting above the water coming north from Antarctica). 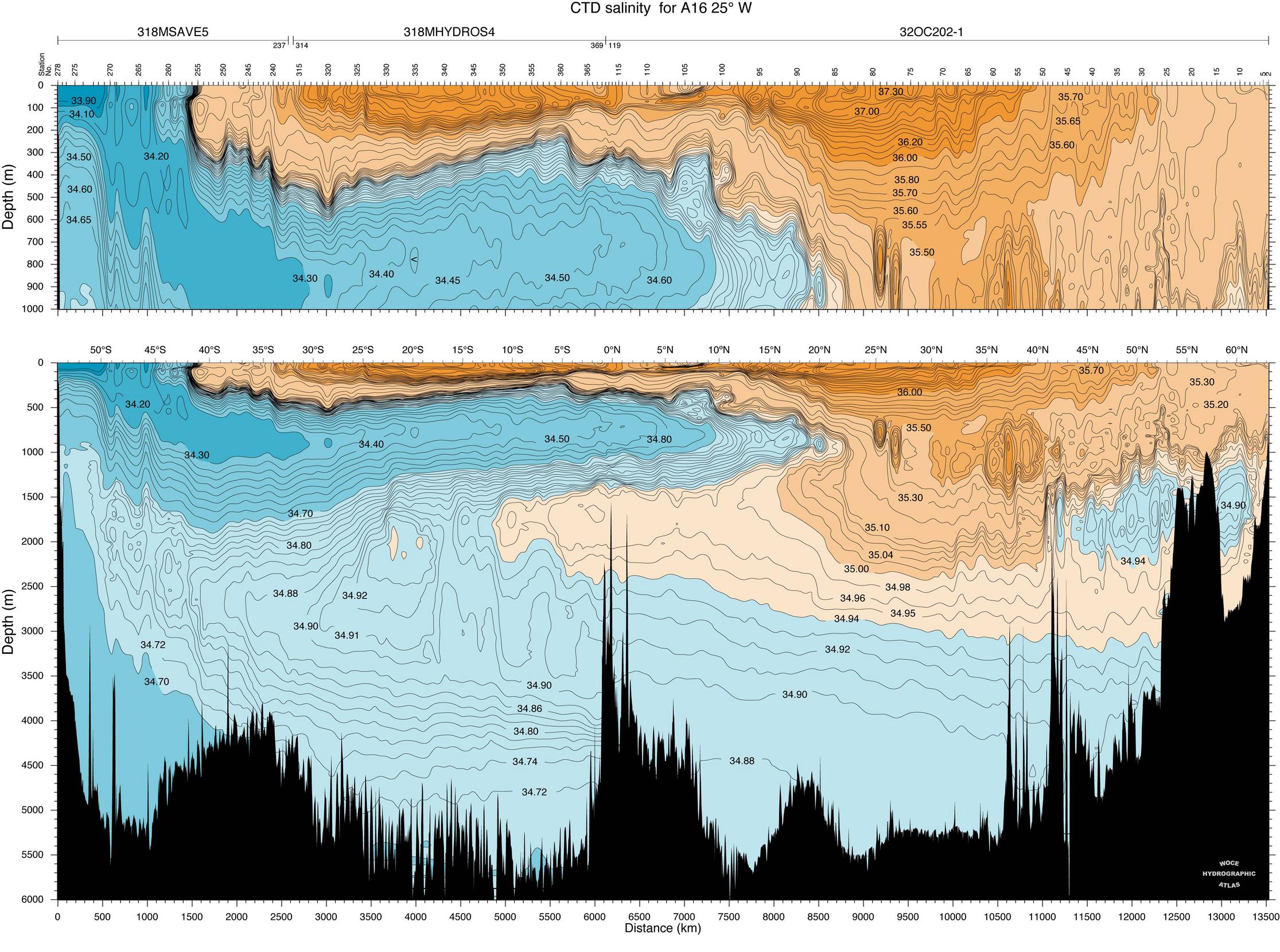 When thinking about the density of the ocean, it's important to remember that the ocean isn't filled with water, it is filled with seawater. Seawater contains approximately 35 g of salt per kilogram of seawater. The density of seawater therefore depends on both the temperature and the salinity. You could write this as

which is correct enough for what we need here. (Small aside, the density also depends on pressure and the coefficients $\alpha$ and $\beta$ depend on pressure, salinity, and temperature - you can see this in the curvature of the lines of constant density in this figure. Truly understanding the density of seawater is a massive undertaking.)

This is why we see water at -0.4°C spreading away from Antarctica in the bottom left corner of that figure. It was colder when it was near the surface, but as it sank it entrained ambient fluid, and warmed up.

This explains how we get cold water down into the abyss, but why doesn't the geothermal heat flux simply warm it up?

So, not much hard maths in there, but I'm not sure we need it.

Cold water is denser than warm water. The very cold water in the Arctic and Antarctic regions sinks and circulates deep undersea.

Not the answer you're looking for? Browse other questions tagged oceanography geothermal-heat or ask your own question.

1
Why more matters appear in hot equator, when they should flow to the cold poles?
2
Why are oceans so deep?
19
Why are the Great Lakes not considered a sea?
15
Why doesn't sea level show seasonality?
8
Was the Caribbean Sea a closed sea during the last glaciation?
4
What is the fastest ocean deep current?