How does global-warming-triggered ice melting cause global sea levels to rise?

Apologies for asking a silly question like this. But I want to offer some points which I could not counter, as follows:

So how does glacial melting cause global water levels to rise? Are there other factors which amplify this, like maybe global polymer waste dumping into the oceans?

Arctic ice, around the north pole floats on top of water. When it melts it does not add to sea level rises and likewise for other ice on water, as illustrated in this video and this video.

Ice on land is a different matter. Ice on Greenland, Antarctic land & glaciers around the world will add to sea level rise because any melt water will eventually end up in the oceans. It's like adding water to a partially filled glass of water.

The thickness of the Greenland Ice Sheet is more than 2 km and it is of the order of 2900 km long and 1000 km wide. The amount of ice in Greenland is 2,850,000 cubic kilometres. If this alone were to melt it would increase sea levels by 7 m. The island of Greenland cannot contain all the melt water and it will end up in the sea.

Because a lot of that ice is currently sitting on land. When it melts, it will go into the ocean. From the National Snow and Ice Data Center Page (NSIDC), Facts about glaciers:

Glaciers store about 69 percent of the world's fresh water.

Also, just because melting sea ice doesn't directly contribute to rising sea levels, doesn't mean it isn't still a factor. From another NSIDC article, What are the impacts of Arctic sea ice loss?:

Light-colored surfaces, like sea ice, have high albedo, meaning they reflect most of the sunlight that reaches them. Dark surfaces, like the surrounding ocean water, have low albedo.

At the height of summer, when the Sun shines relentlessly on the Arctic Ocean, exposed ocean water absorbs nine times as much solar radiation, if not more, than sea ice does. Before ice can form again in the fall, the ocean must release the absorbed heat into the atmosphere. The loss of sea ice warms the Arctic, contributing to a phenomenon known as “Arctic amplification” where the Arctic warms at a faster rate than lower latitudes. [...]

Just as sea ice absorbs wave energy and reduces wave action along shorelines, sea ice reduces wave action on ice, namely ice shelves (thick slabs of ice attached to coastlines that float over the ocean surface) and water-terminating glaciers. Increased wave action caused by sea ice retreat can flex and bend these ice bodies, increasing the possibility of retreat. Glaciers that have lost their ice fronts tend to flow faster, and because this process introduces a body of ice into the ocean that was not there previously, it raises sea level.

Most glaciers, ice caps and ice sheets in the world are currently losing ice mass.

Picture of glacial ice entering ocean - contributing to ocean volume at that point, to melt later as floating ice - 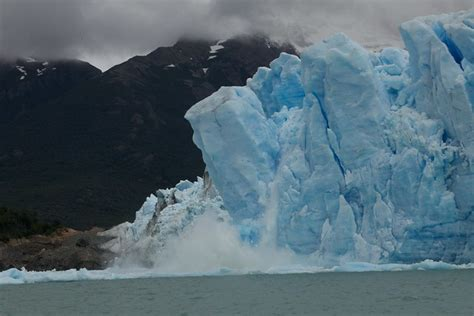 Your question mixes a few independent issues. Two of the statements are undisputed:

The conclusions you draw seem muddled, but here is a take on them:

1 Well, Earth itself is from outer space, so to speak, because it is accumulated interplanetary matter from the accretion disk of the Sun. What the theory says is that the original composition of Earth's material did not have very much water in it because it was too hot for water to condense; and that oxidation of hydrogen over geological time frames does not suffice to produce the amounts we see today. Since many asteroids contain significant amounts of water they are one of the suggested sources for the water on Earth. So the suggestion is that water was added later in Earth's geological history.

Thermal expansion of the ocean is responsible for about half the sea level rise:

First, warmer water expands, and this "thermal expansion" of the ocean has contributed about half of the 2.8 inches (7 centimeters) of global mean sea level rise we've seen over the last 25 years, Nerem said. Second, melting land ice flows into the ocean, also increasing sea level across the globe.

A few of us here have given eminently reasonable answers already, but I think I know where your confusion comes from. The argument "ice is less dense than water hence it must result in less volume if they melt in water" only works if the ice you are talking about is completely submerged in water. Recall the images of icebergs you've seen -- none is completely submerged in water.

Of course, the argument being flawed doesn't mean the conclusion cannot happen to be correct. So does the water level increase, decrease or remain the same, if a floating iceberg melts?

This question requires some physics of the buoyancy force. Since the buoyancy force provided by water to the iceberg is equal to the force of gravity on the displaced water, F_buoyant=ρVg, where V is the displaced volume of water, and also equal to the force of gravity on the iceberg since it's floating. This means, the mass of the displaced water when the iceberg is floating, should be exactly the same as the mass of the iceberg itself. It follows that if icebergs were the same density as the sea water they float on, then the water level would remain exactly the same. You can verify this by experimenting with a glass of water and floating ice cubes. But salty water is of higher density than fresh water, which is what icebergs become when they melt. Hence the water level would increase if icebergs melt. This can also be empirically verified.

This however is only one of the reasons that the water level rises. As many others have pointed out, much of the glacier is not floating on water -- they are on land. Their melting and pouring into the ocean would obviously increase the water level. Thermal expansion goes the same direction.

Not the answer you're looking for? Browse other questions tagged climate-change oceanography glaciology plastic or ask your own question.

13
Is Antarctic sea ice at record levels?
14
What is a reasonable forecast of sea level in 2100?
17
Is global warming being moderated by latent heat of melting polar ice?
15
How will sea level rise be distributed across the globe?
2
Estimated volume, daily or annually, of sea level rise due to melting ice?
4
Giant Cavern the Size of Manhattan Under Thwaites Glacier in West Antarctica - how was satellite and airborne radar data combined?
1
What could cause a turn from global warming to global cooling?
4
Understood cause of sea level rise between 1850 and 1950
3
Does Earth's rotation cause sea levels to increase from east to west?
2
What are the risks of developing geoengineering?