Is there still a hole in the ozone layer?

In the 90's, there was a hole in the ozone layer as big as Antarctica. After the Montreal protocol was created, harmful CFCs were no longer emitted and the ozone layer problem subsided.

"In 2018, high levels of banned chlorofluorocarbons were detected in the atmosphere that were eventually traced to China"

Other reasons include climate change.

The concentrations of the damaging substances in the atmosphere have leveled off since the protocol came into force and are slowly decreasing, providing the foundation for the layer's gradual healing. But worsening climate change is now slowing down the recovery.

As a further explanation,

Halogenated ODS are effectively inert in the lower atmosphere. The overturning motions associated with warming and cooling of airmasses in the lower atmosphere allows some of the ODS to be transported into the stratosphere. The substances are then broken down by ultraviolet light and form stable halogenated “reservoir” compounds, which by themselves do not strongly affect ozone.

The main problem arises when the reservoir compounds are further altered to create halogenated “reactive” radicals. This is done through processes that largely take place on the surfaces of tiny stratospheric aerosol particles. These reactions make the by-products of the ODS more potent for ozone destruction.

The amount of particles taking part in this process is significantly enhanced in Antarctica over winter. This is because of the presence of Polar Stratospheric Clouds (PSCs) in the lower stratosphere.

PSCs are made up of tiny particles made up primarily of nitric acid and water vapour, and require a temperature of around -80°C or colder to form. In winter, a vortex of air forms in the stratosphere over Antarctica. Within the vortex, air circulates with minimal mixing with the rest of the atmosphere. This drives strong cooling of the lower stratosphere and creates the conditions favourable for PSC formation.

When spring comes, the halogens released by the PSCs are broken down by sunlight. The resulting free chlorine and bromine atoms destroy ozone before being cycled back into halogen radicals. The presence of sunlight begins the cycle again.

Overall, the reaction cycle destroys many ozone molecules for each chlorine and bromine atom present. PSC formation enhances the cycle as it removes certain nitrogen compounds from the atmosphere. These compounds would otherwise reduce the overall amount of halogenated radicals present.

The latest opinion, is that,

while the ozone layer is beginning to recover, it's likely to take until the 2060s for the ozone-depleting substances used in refrigerants and spray cans to completely disappear from the atmosphere.

Why is there still a hole in the ozone layer?

To some extent, there most likely will always be an area over Antarctica with reduced stratospheric ozone content in late Southern Hemisphere winter. (I wrote "always". Read that as meaning for the next several millions of years.) The issues is how long that annual ozone hole exists, how large that ozone hole becomes, how deeply depleted that ozone hole is, and (most importantly) what that means for the world at large. The reason it will continue to exist to some extent is that volcanos can inject ozone-deleting chemicals directly into the stratosphere.

However, right now, the worst of the ozone-deleting chemicals in the stratosphere are chemicals created by humans. Many of those chemicals will remain in the atmosphere for decades after production of them is ceased. For example, the graph below depicts the amount of trichlorofluoromethane (aka Freon-11, and other names) in the atmosphere: 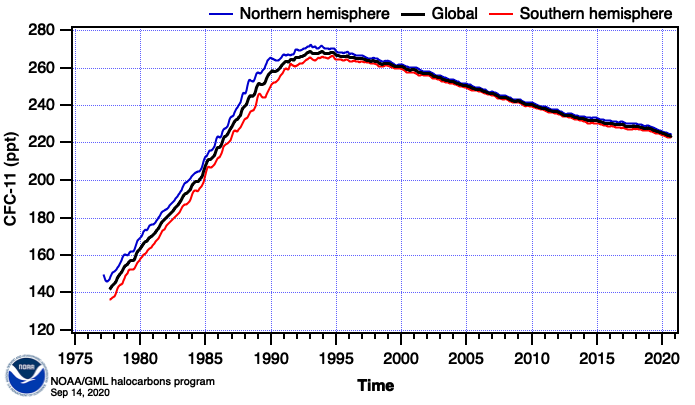 From the graph, it's apparent that the concentration peaked around 1993 and has been slowly declining since then. It has been almost 30 years since the production of trichlorofluoromethane has been banned, and yet the levels remain well above the late 1970s level. Ozone-depleting chemicals such as trichlorofluoromethane take decades to centuries to leave the atmosphere, even in the case that production has been completely eliminated. Trichlorofluoromethane, for example has an atmospheric half life of 40 to 100 years, depending on which article one reads. The Montreal Protocol does nothing to address the long-lived nature of those ozone-depleting substances. Once those substances get into the atmosphere, they are going remain in the atmosphere for a long time.

From the above graph, there was a slight stall in the decline starting around 2013 or so. This apparently was illegal production in Asia, later chased down to China. But this was a slight stall. The important thing to read from the graph is that it will take a long time for those human-created ozone-depleting chemicals to vanish.

Not the answer you're looking for? Browse other questions tagged ozone upper-atmosphere or ask your own question.