What exactly causes this moving orange glow before sunrise?

I've been watching twilights for some time, and noticed that each time there's a very clear sky, an orange-pinkish glow is visible at the solar azimuth when Sun is somewhere between 1° and 5.5° below horizon. This glow shifts upwards as the Sun elevates still remaining under the horizon, and moves backwards when the Sun descends deeper under the horizon.

See for example the following timelapse animation of an approaching sunrise, made from photo sequence shot in Namibia by Georg Zotti from the Stellarium team. Exposure time gradually decreases to account for sky brightness. 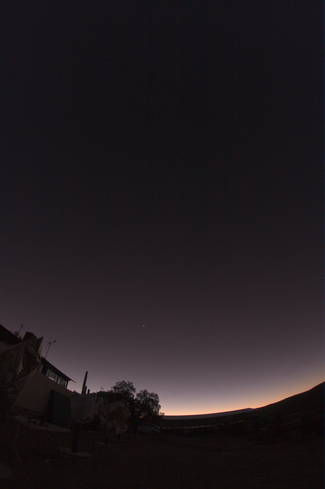 Below is a chart that shows time dependence of a middle vertical line of pixels from the animation above:

At first I thought this glow was due to some kind of very uniform cloud cover, but then I noticed that cirrus clouds, if a few are present near the horizon, stop being directly lit when the Sun is about 4.5° below the horizon, before the glow disappears, while the glow remains present until the Sun is somewhere about 5.5° below the horizon (these figures are from observations at 60°N,30°E). So I suppose the glow originates somewhere in the stratosphere, or at the very least several kilometers above the cirrus clouds.

So, what exactly is the origin of this glow? What kind of particles, what size distribution and altitude profile do they have?

Browse other questions tagged atmosphere atmospheric-radiation upper-atmosphere aerosol or ask your own question.

7
Strangely bright morning twilight over Switzerland
9
What causes the colors seen during a sunset / sunrise?
5
How much and what kind of radiation passes through a cloud?
3
Are there measurements or calculations that suggest atmospheric ice plates would be horizontal to within 0.1 degrees?
10
Why is the Earth's shadow blue?
7
Why is the skyline hazy on the Greek islands?
2
Atmospheric conditions needed that blocks all bright light during sunsets and allows you to stare directly at the sun