Does total precipitation have different meanings? 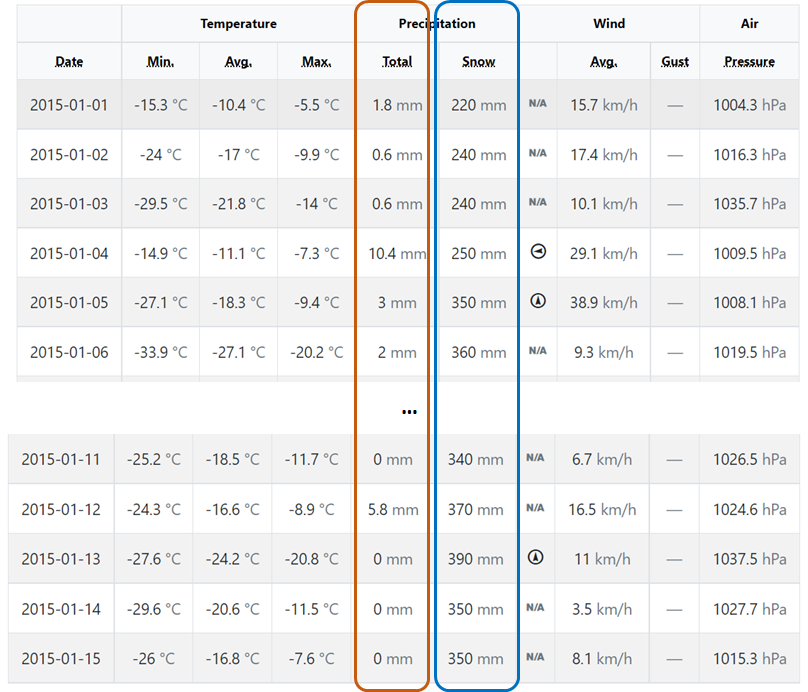 Generally, we consider that 10 cm of snow = 1 cm of equivalent water. But, following a number of paramters, this ratio can be great or less. But let us suppose that the ratio snow/water = 100cm/1cm (which is probably wrong), despite this very disproportionate ratio, it is impossible to show that Total precipitation >= Solid precipitation (snow) at dates where it snowed.

Here is the link to the site where I got the data (you can enter an Airport name to get some data to see what is going on, if necessary): https://meteostat.net/en/

Figured out what it's doing by comparing results for the site at Buffalo Airport with NOAA NOWData... for December 26th and 27th, 2020 it showed (after converting NOAA data from inches to mm):

So the total precip is what I would expect, a liquid water equivalent, matching with the NWS value, which I'm familiar with using for many years.

The problem is your meteostat site is giving the snow DEPTH in the snow column... so a measure of how much snow is sitting on the ground (taken early in the day... an IOWA NWS site suggests at 7 AM), not how much fell in the day, and you won't be able to calculate from it to get total snowfall (because melting or lack thereof and compacting mean you can't just count differences... as even on this date, the 470 mm only became 210 mm of extra snow depth)

I guess that's kind of the de facto data taken at stations, as measuring accumulation directly can only be reasonably done with more frequent measurements on a swept-clean snowboard, which is contrary to station automation and probably only done on site at significant airports and weather offices? So for most places, that's the best direct data you have :-( The US NWS also produces precipitation and snow map interpolations from radar and station data, but not sure such a dataset exists for other places in the world :-( So not sure how hydrologists get snowfall data, without someone going out to these places and doing longterm data collection? Must interpolate from nearby stations or use model data or such???

Not the answer you're looking for? Browse other questions tagged meteorology climate hydrology or ask your own question.

1
Wind speed, precipitation, extreme daily precipitation
4
Single-layer water content variables
2
How different can microclimates be than their surrounding areas?
5
Why does Colorado have so many days of partly cloudy skies?
2
formula to convert precipitation in mm/h to runoff in m³/s
3
Total differentiation